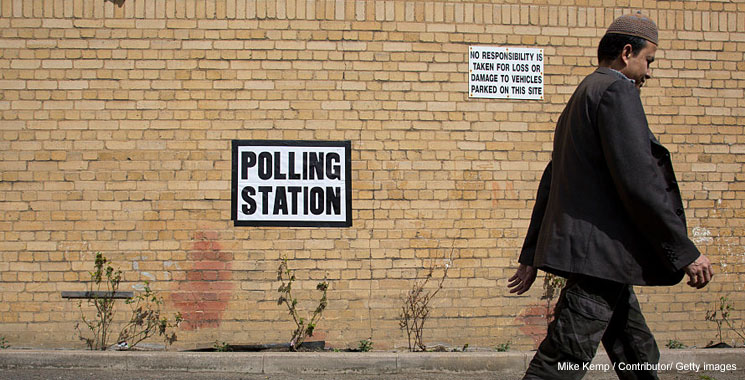 The UK in a Changing Europe’s Academic in the Spotlight series promotes academics who have produced original, thought provoking work on the UK’s changing relationship with the EU.

Our first Academic in the Spotlight is Dr Neema Begum, research associate at the Centre on the Dynamics of Ethnicity, University of Manchester. Neema works on the political representation of ethnic minorities in UK politics.

Neema’s recent report with Professor Maria Sobolewska, on the under-representation of ethnic minorities in local government, was reported on Sky News, yesterday.

The Black Lives Matter protests in the US following the death of George Floyd have spread to Europe and indeed the world. Recent weeks have witnessed growing condemnation of Europe’s colonial past and increased interest in matters pertaining to race, specifically anti-Black racism.

I have long been interested in the voting behaviour, political attitudes and representation of Black and Asian Britons. I’ve studied politics since undergraduate level, but, bar a few notable exceptions, there are few courses on race and the political behaviour of ethnic minorities on politics courses in the UK.

In 2015, I decided to pursue a PhD in politics that focused on ethnic minority voters. At a time when UKIP was making significant gains, I was interested in how the mainstreaming of anti-immigration language might affect the political engagement of ethnic minorities.

This was a time, remember, when even the Labour party was calling for controls on immigration, with the risk of alienating their strong base of ethnic minority voters who generally see anti-immigrant sentiment being targeted towards them even if they’re British-born.

The Brexit referendum of course fundamentally altered the nature of the debate, not least when it came to issues of race, identity and belonging. The Leave campaign drew accusations of racism and xenophobia.

I carried out a number of focus groups and interviews with Black and Asian voters and found that the majority supported Remain, not out of strong support for remaining a member of the EU, but rather because of their dislike of the Leave campaign and a rise in white nationalism which they associated with those campaigns.

At the same time, however, about a third of ethnic minority voters supported Leave. My research illustrated that ethnic minorities were largely ambivalent about the benefits of being in the EU.

Those of Indian and Black Caribbean background were the most pro-Leave out of all ethnic minority groups. Ethnic minority Brexiteers felt they would be better off as religious and ethnic minorities out of the EU because they saw other European countries as being more racist.

The migration crisis had a big impact on these perceptions as voters were exposed to the sight of refugees from the Middle East and Africa being blocked from entering Europe.

Moreover, there was a sense that EU membership implied less trade between Britain and the Commonwealth, while freedom of movement for Europeans meant higher barriers to entry for immigrants from outside the EU.

More ethnic minorities voted for Brexit than have ever voted Conservative. The fact that ethnic minority voting in the referendum didn’t conform to party lines reveals the complex political positions taken by members of different ethnic groups.

In my current postdoctoral project with Professor Maria Sobolewska, I am researching ethnic minority representation in UK local government. We have collected data on the ethnicity, gender and political party of every local councillor in the UK, which is a first in this under-researched area.

I am also conducting interviews with local councillors for their views on ethnic diversity in local government. In a forthcoming report, we find under-representation of ethnic minority councillors, particularly from Black backgrounds, who make up just one percent of UK councillors.

My research plans involve continuing to analyse the political attitudes of ethnic minorities, not least the ways in which racism affects their political participation.

Clearly key issues here will be the way in which the coronavirus pandemic has seen Black and Asians dying at a disproportionately higher rate than the white population and the Black Lives Matter protests, which have thrown into sharp relief the structural racism faced by Black people in the UK.

I am also hoping to investigate how differences between and within ethnic minority groups affect political behaviour. There is a tendency to conflate the experiences of different groups, which I suspect is somewhat misleading.

Indeed, I am keen to investigate the anti-Black racism of South Asians and other non-Black minority groups, colourism (discrimination against people with darker skin tones) and other forms of racism.

There is, however, a dearth of survey data on ethnic minority political attitudes. In order to ensure equal participation in British democracy, we first need to know who participates currently, who does not, at what levels and why.

My research does this by shedding light on Black and Asian political attitudes and participation in contemporary British politics.

The Windrush Scandal, the disproportionate death toll from coronavirus, the Black Lives Matter protests along with Brexit will continue to shape political trust, political party evaluations and activism of ethnic minority groups in varying ways.