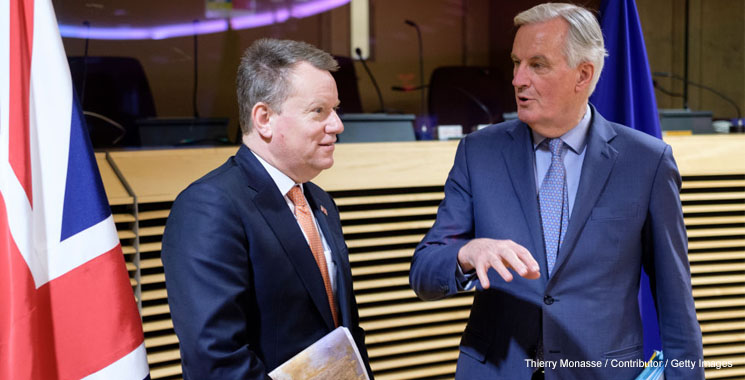 The return of Boris Johnson and Dominic Cummings to Number 10 has seen a significant ramping-up of the British rhetoric on the negotiations around the future partnership with the EU.

That’s not merely meant stronger words about refusing an extension of the talks, currently due to end in December, but also the announcement by Michael Gove that there would be no activation of a contingency plan should a deal not happen.

In Gove’s eyes, not extending talks will go hand-in-hand with the coronavirus crisis in ‘focusing minds’ in the EU on getting to an agreement.

But does that stack up? One answer might be found in negotiation theory.

Contrary to popular impressions, real-world negotiations don’t involve rogue individuals, acting on a hunch, or staring the other guy out. It’s not about playing tough, or about compromising, but instead about trying to find better outcomes for all involved.

The easiest way to think about this is that there are some things in the world that are under your control and others – a lot more others, in fact – that are not. A negotiation is a means to achieve a better outcome through agreement with others (who themselves control some things) than you can manage by yourself.

The test of a successful negotiation is therefore not about beating the other side, or about finding an agreement at any price, but about whether all involved have improved their situation, or at least not damaged it.

This central idea shapes a lot of other theory that we don’t need to delve into here, but one aspect that does require discussion is the notion that the key test for any participant is the relative merits of what they can get from an agreement and what they can manage by themselves.

As long as the agreement produces a better outcome than a non-agreement, then it’s rational to pursue the agreement.

Easily said, although it does come with a very big warning that deciding what a ‘better outcome’ means in more specific terms is a very tricky process. However, given that the same is true for the non-agreement outcome too, this is a judgement of which of the two works better for you.

The non-agreement outcome, your fall-back, represents the worst that can happen to you, because it’s all under your control. So working to improve your fall-back means you have a better result from the process, however it goes.

And that means it matters inside the negotiation too. If you can improve your fall-back then you can become more prickly in negotiations, which aren’t under your control, because you have a more attractive alternative.

At the very least, strengthening your fall-back protects you against pushy negotiators from the other side, because you can show them you have an improving alternative. Improve your fall-back enough and you might even be able to ask more of them, because the gains of agreeing become more marginal for you.

In short, a strong contingency matters whatever you’re trying to achieve. If you’re aiming for a deal, it helps you to get a better deal. If you’re going through the motions, then you’re also improving your outcome, because that’s what the contingency does for you.

All of which suggests only two explanations for why the government is not activating its contingency plans. One’s rational and merited; the other is not.

The rational reasoning would be that you have conducting a review of the objectives you’re trying achieve, where the negotiations are at, and what your contingency currently looks like, and that you’ve concluded you are already in an optimal situation.

Even if the negotiation fails – and remember that will never be entirely in your hands – the UK will not suffer at all from that, so no further work is needed.

Given that the almost entire weight of analysis points to a significant disruption to the British economy in a no-deal situation, this must point to a very substantial political or social gains. But even then, it seems odd to be saying that the economic dislocation requires no attention at all.

The second, and much less rational, line of argument would be that the negotiations are a game of chicken. Dumping the contingency plan is akin to throwing away your steering wheel as you hurtle towards the other lot, to demonstrate that you’re set on your course and if any is going to give way, it’ll have to be them.

The UK government knows that the EU would prefer an agreement from this process, so it might be calculating that this will ‘focus minds’.

This is bad negotiating, twice over.

First, it’s based on an assumption that you know what the other side, the EU, wants and needs from this process. Yes, it would like an agreement, but not at any cost. And from the EU’s perspective, non-agreement looks a lot worse for the UK than it does for the EU, so the threat doesn’t look credible.

Second, and coming back to theory once more, the only definite thing that dropping your contingency planning will do is worsen your fall-back. So that’s a definite cost against a possible gain.

There’s a lot to be said for confident politics, but that confidence needs to be grounded in a measured and prudent base. When so much in the world is out of your hands, why wouldn’t you try to make the very best of those things that are?

By Simon Usherwood, professor of Politics at the University of Surrey.