The new German government: what should we expect? 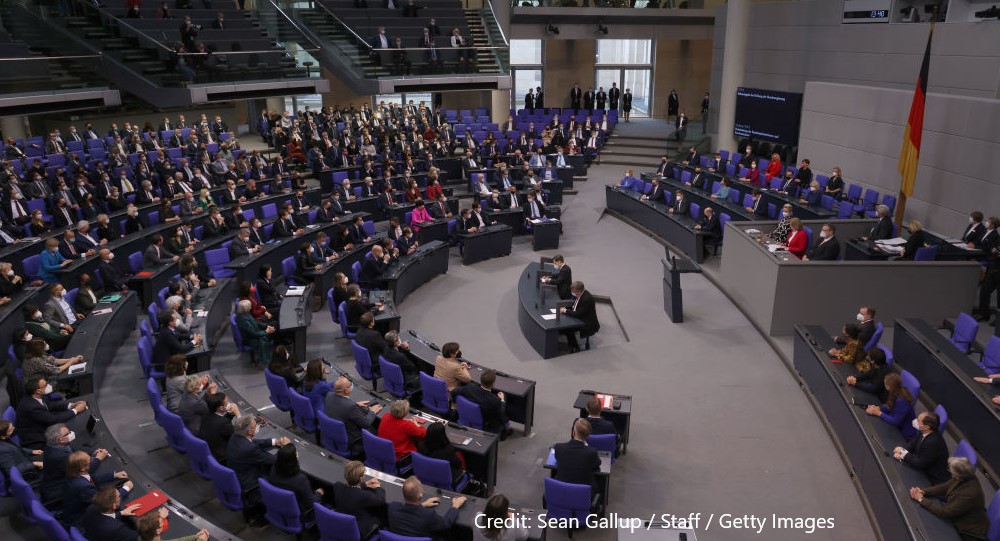 Young Germans have only known one chancellor – Angela Merkel. Merkel and her party, the Christian Democratic Union / Christian Social Union (CDU/CSU), have been in office, in changing coalition constellations, since the election in 2005. In October 2018 she announced that she would not run again in the next election, and since then, a lot has changed in the political landscape of Germany. The CDU/CSU continuously lost support, the Social Democrats (SPD) and the Green party gained, and soon it was pretty clear that the result of the 2021 election would lead to a result that would make a three-party-coalition necessary for the new German government.

And, indeed, the 2021 election results left the parties delicately poised: the CDU/CSU won 197 seats, the SPD 206, the liberal Free Democratic Party (FDP) 92, and the Greens 118. This led to three possible coalitions: a grand coalition of the centre-right and the centre-left (CDU/CSU, SPD), a so-called Jamaica coalition (CDU/CSU, Greens, FDP) and a traffic light coalition (SPD, Greens, FDP).

Due to the poor performance of the CDU/CSU at the elections, the SPD claimed the right to start the negotiations to form a government. Since both the CDU/CSU and the SPD immediately shut out the possibility of forming another grand coalition, it was down to the FDP and the Greens to choose their senior partner: the SPD for a traffic light coalition or the CDU/CSU for a Jamaica coalition. Hence, the Greens and the FDP became the kingmakers (or rather chancellor-makers).

This is, in itself, a highly unusual situation since the biggest party usually has an advantage when it comes to negotiations. After the 2017 election, the CDU/CSU, the Greens and the FDP had already negotiated over forming a coalition. In the end, the negotiations failed because the FDP withdrew.

Considering the unusual circumstances, the actual coalition negotiations (that officially only started after the exploratory negotiations were successful!) were pretty short and – at least on the outside – without much conflict. This is surprising considering the fact that government formation is more difficult the more ideologically diverse the partners are.

One potential explanation could be that the allocation of ministries more or less resembled the preferences of the individual parties. The Social Democrats got portfolios that focus on social affairs and housing, the Green Party received a number of portfolios that largely focus on environmental topics and the FDP was able to obtain the finance ministry. Avoiding too much control by the coalition partners might have therefore been an option for the parties.

The coalition agreement further sets a clear course for the upcoming four years in office. In German, the coalition agreement is titled ‘Mehr Fortschritt wagen. Bündnis für Freiheit, Gerechtigkeit und Nachhaltigkeit’ – which basically translates to ‘Dare to be and act more progressive. Alliance for freedom, equity and sustainability’. The subtitle again puts emphasis on the most important topics of the three parties SPD (equity), Greens (sustainability) and the FDP (freedom).

Second, the parties commit to a common European position towards the UK and also plan to pursue close bilateral cooperation – for example strengthening cooperation on youth, education and cultural exchange policies. At the same time, the coalition parties insist on compliance with the treaties (like the Northern Ireland Protocol and the Good Friday Agreement) and threaten retaliation measures in the case of non-compliance.

Overall, then, the formation of the new coalition in Germany, a new post-Merkel German government, went surprisingly well considering the fact that it is the first (but probably not the last) of its kind. However, it is not quite clear yet whether the coalition will actually be able to stay in office until the end of the term. The conflict potential within the coalition is comparatively high and the external circumstances for the German government are difficult as well: the pandemic, as well as the climate crisis, could potentially threaten the performance but also the survival of the coalition government.

By Svenja Krauss, postdoctoral research fellow at the University of Vienna.