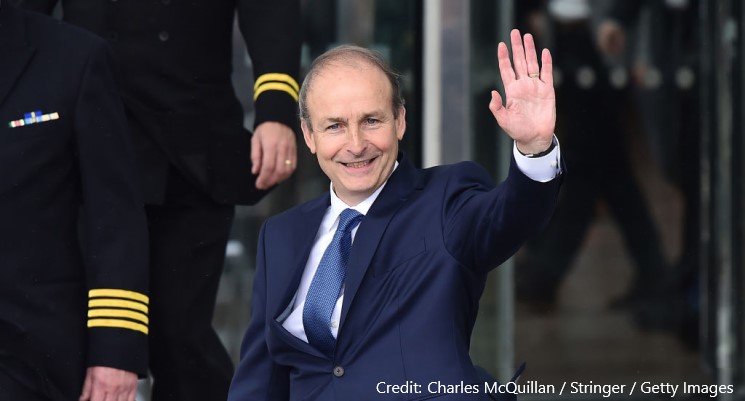 Although the parties differed in their decision-making structures—an élite-dominated electoral college for FG, a one-member-one-vote simple majority vote in FF, and a one-member-one-vote poll with a supermajority (over two-thirds) requirement for the Greens—they were united by outcome: emphatic approval by each party’s members.

The result was confirmed by Dáil vote the following day, with FF leader Micheál Martin following in every one of his predecessor’s footsteps by being elected Taoiseach.

Following the lead of other elements of the British press, particularly the Daily Express, Dan Hodges of the Mail on Sunday tweeted his view that outgoing Taoiseach Leo Varadkar had been defenestrated by the electorate over his Brexit position.

Hodges’ tweet caused much mirth on this side of the Irish Sea, as much for its predictability as for its characteristic ignorance of Irish politics.

First, Varadkar has not been removed from government: while the new government is led for now by Martin, Varadkar is due to return as Taoiseach after two years.

Second, until then, he will serve as Tánaiste (Deputy PM) and Minister for Enterprise, Trade and Employment, which still gives him a stake in Brexit proceedings.

Third, the man who has been Ireland’s Minister for Foreign Affairs for most of the Brexit negotiations, Simon Coveney, remains in situ. It is rather less plus ça change than it is plus c’est la même chose.

Fourth, Brexit is simply not a contentious issue in Ireland.

There is broad consensus in the country that Brexit is an unnecessary harm caused to both Ireland and the UK; while there is strong desire to see that harm minimised for both nations, most people agree that Irish interests are best protected by sticking close to our EU colleagues rather than supporting the demands of our nearest neighbour.

Throughout the last government, FG’s negotiations on behalf of Ireland were supported by all of the major parties in the Dáil, including both of their proposed coalition partners and even their traditional bêtes noires in Sinn Féin (SF, which now leads the Opposition; the first time that it has done so, and only the second time that a party other than Fianna Fáil or Fine Gael has been in this position).

The Brexit settlement is reflected in the exit poll conducted during February’s general election by Ipsos MRBI on behalf of RTÉ, the Irish Times, TG4, and University College Dublin.

Instead, voters were much concerned about issues where the parties do differ from one another, chief among them the long-running crises in Ireland’s provision of housing and healthcare.

These differences generated the lengthy delay between the election the agreement of a programme for government, and until Friday’s announcement, the outcome of the internal party votes was far from certain.

While tensions exist between FF and FG due to their Civil War-begotten rivalry of nearly a century, and neither party’s rural base is necessarily comfortable working with the Green Party’s environmental urbanites, attention has mostly focused on the Greens during the approval process.

As my University College Cork colleague Theresa Reidy has pointed out, while we know relatively little about party membership in general, we know that Green Party members are broadly younger and more diverse (particularly in gender) than is the case for most Irish parties.

Moreover, it has grown exponentially in recent years, with many new members flowing in from non-partisan ecology movements such as Extinction Rebellion.

While the Irish Greens have traditionally been less ideological and more pragmatic than their equivalents in the UK, and coalesced with FF from 2007 to 2011, the recent transformation of the membership has brought them closer to the left and further from the ‘establishment’.

An Irish Times/Ipsos MRBI poll released on 16 June seemed to indicate the Greens might oppose the deal: only 48% of those identified in the poll as Green Party voters supported going into this particular coalition, while 61% said that it should only enter government if all of its demands on climate action were met.

However, just five days later, an Irish Mail on Sunday/Ireland Thinks poll estimated that 74% of Green Party voters supported the programme for government.

The latter poll most closely reflected the final outcome: 76% of the Green votes were in favour, compared to 74% in FF and approximately two-thirds of the FG ballots (though this matriculated to 80% in their electoral college).

SF has largely played these circumstances well: having spent the months since the election demanding to be included in the government negotiations—demands it knew would go unmet—the party has successfully portrayed itself as keen to govern, but the outcome of the coalition process has ultimately protected them from the responsibility and risk of actually having to enter government.

A populist social media campaign with the hashtag #NotMyTaoiseach has been used to question the legitimacy of Martin and his government on the basis of their requiring several counts to be elected (an irrelevant point in Ireland’s preferential voting system, but one that has been popular online nonetheless) and present SF leader Mary Lou McDonald as a ‘Taoiseach-in-waiting’.

Despite SF’s protestations, the new government enjoys high legitimacy. Taken together, the coalition parties hold both the majority of first-preference votes cast and seats elected in the 2020 general election, as well as the majority of support expressed in subsequent opinion polls.

The greatest threat to the new administration remains the internal tension caused by historic rivalries, urban/rural conflict, and deep disagreement on domestic policy.

By Dr Luke Field, lecturer at the Department of Government and Politics, University College Cork, and former editor of the Irish Politics Forum.