New polling: the British public’s view of the global response to the Ukraine crisis 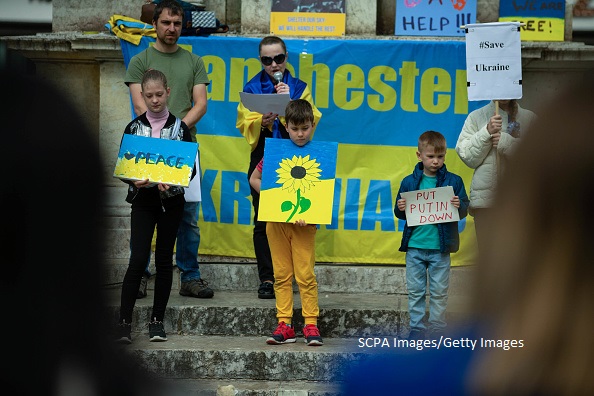 It is over two months since Russia’s invasion of Ukraine. Three days before the invasion, as part of our work with Redfield and Wilton Strategies tracking views of Brexit, we asked the public for their views on a range of foreign policy issues. Two months into the invasion we fielded the same questions – along with some others to understand perceptions of the response from the UK and the rest of the world.

Both within the UK and across the globe, the war has had far reaching consequences – not least for foreign policy.  This new polling allows an assessment of the impact on the views of the British public.

1.  Since the invasion, the British public now have a significantly more favourable view of Ukraine and Poland – though opinions of other countries have barely shifted.

When we measured the British public’s views of a range of countries just days before Russia’s invasion, views of Ukraine were not fully formed – they were more likely to say they had neither a positive nor a negative view of the country than any feeling either way. Since then, unsurprisingly, we have measured a significant shift in positive sentiment towards Ukraine.

When thinking about the implications of the invasion, we may also have expected some increase in positive sentiment towards some of the UK’s allies – particularly those that have shifted to a more assertive foreign policy. Equally, we might also have assumed that countries that have not been part of the pushback against Russia would have taken a reputational hit among the public.

Perhaps surprisingly, that’s not what we have found: the British public have roughly the same view of countries not directly involved in the conflict as they did two months ago.

The exception to that is Poland, whose net favourability has jumped from +28 to +40. This data suggests the fact that Poland has taken some 2.6 million Ukrainian refugees, or 60 percent of the total exodus since the Russian invasion, has been noticed and has made the public hold a more favourable view. 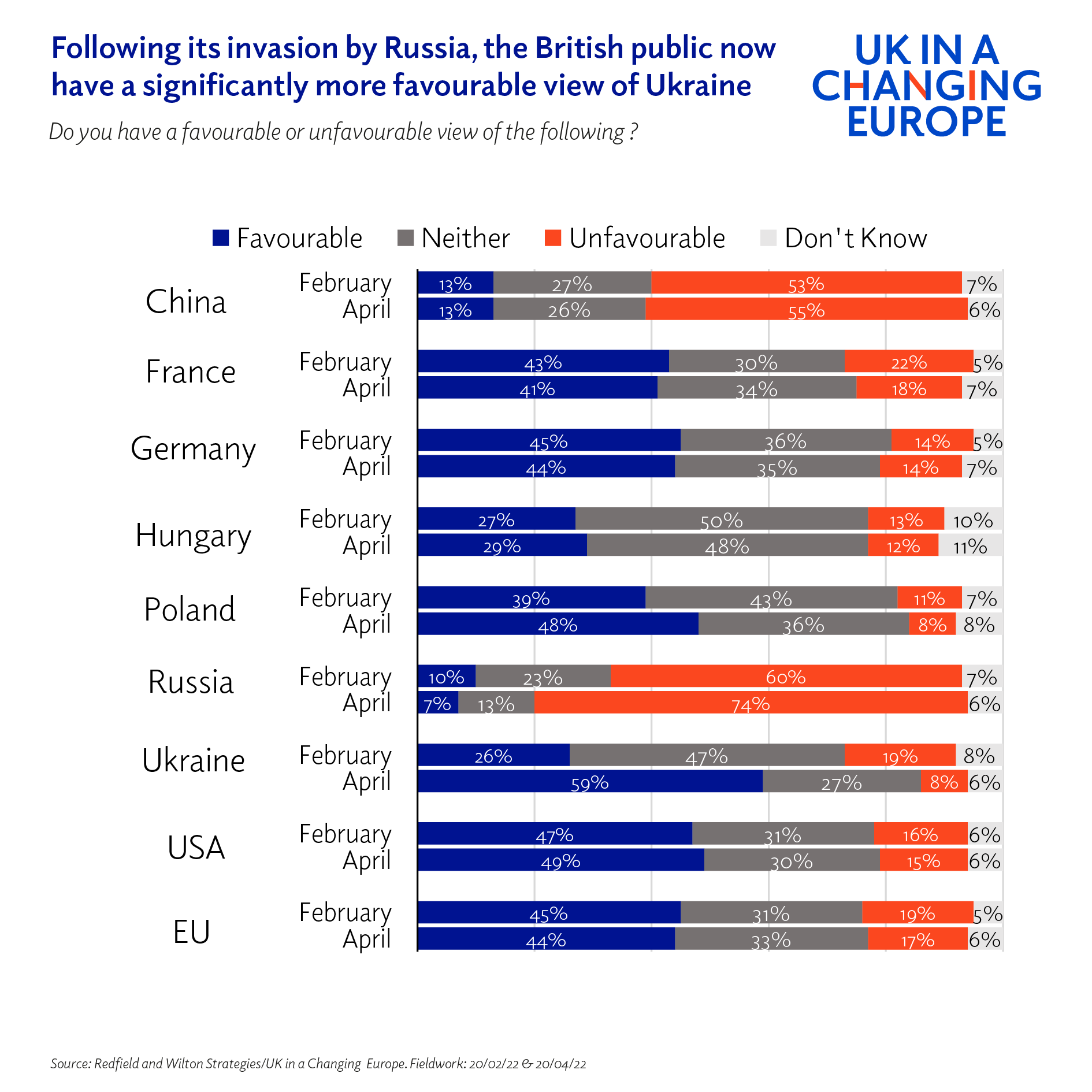 2. Britons approve of the UK’s response to helping Ukrainian refugees – though there is cross-generational agreement that too few visas have been issued.

In turn, this makes the UK Government’s response to the migration of Ukrainian refugees important to understand. While schemes such as the Homes for Ukraine programme have been popular, the 27,000 Ukrainians that had arrived in the UK by the end of April is low when compared with those who have arrived in other countries. In comparison, Ireland – with an overall population 13% the size of the UK’s – had taken 24,400 refugees as of 20 April.

At the same time, we also asked whether the number of visas that the United Kingdom has been granted to Ukrainians been too many, too few, or is about right. While some 30% felt the right amount of visas had been issued, 41% said too few compared to just 9% who felt too many.

Interestingly, it is older Britons who are most critical of the number of visas issued to Ukraine and think the number is too low. Just under half of those over 55 think the UK has issued too few visas, while the same is true for less than 40% of those aged under 55. 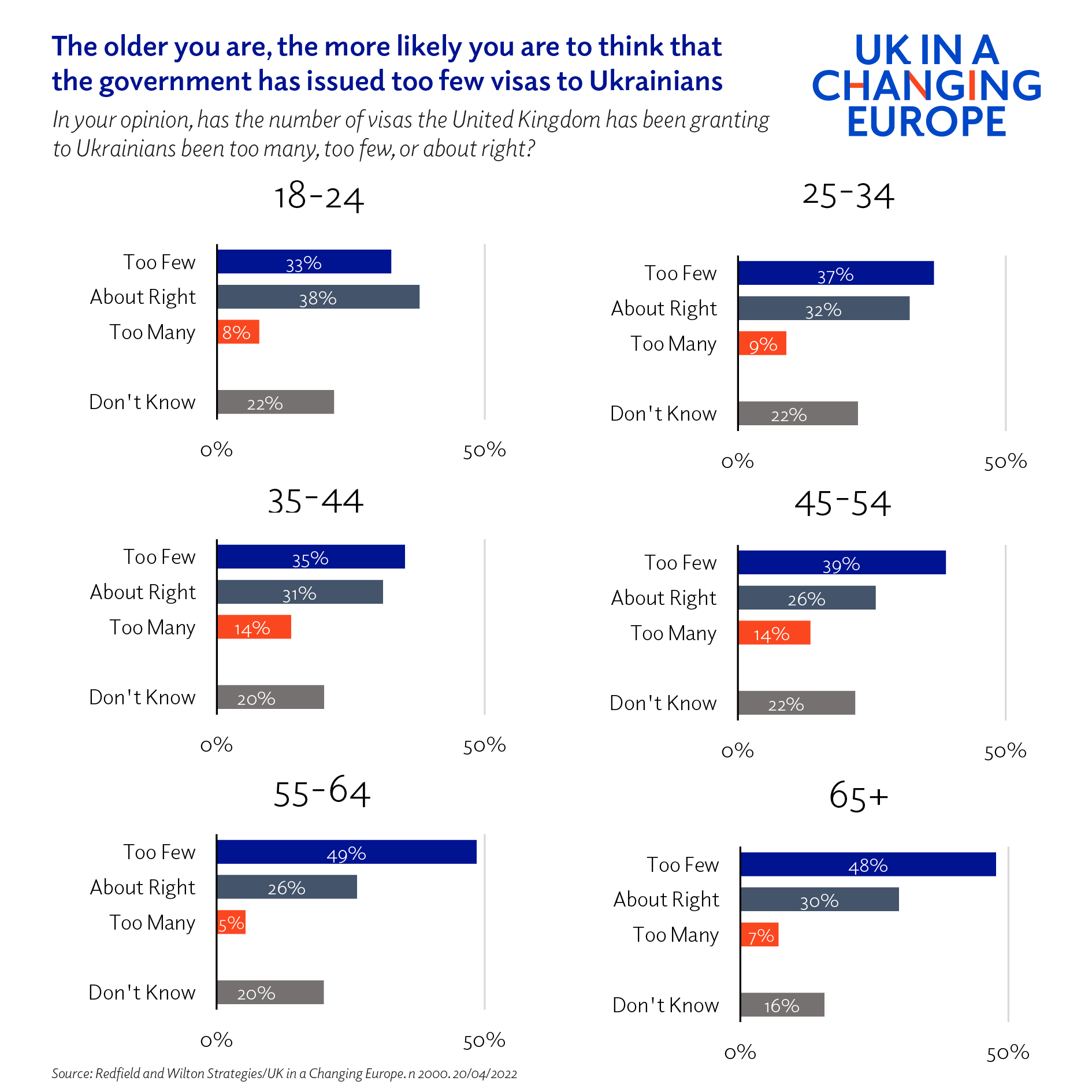 3. Overall, the public are more likely to think Brexit has strengthened Britain’s Response to the Ukraine crisis than weakened it.

The UK has touted its ‘Global Britain’ approach to foreign security and defence cooperation as a key benefit of Brexit, allowing Britain to build bilateral relationships inside and outside the EU. It is clear that President Zelensky feels that the UK’s response has been relatively strong. Yet others have argued that a lack of informal co-operation with the EU has meant the UK has been locked out of key decisions.

The public do not seem completely sold on either argument: 36% believe that being outside the EU has strengthened the UK’s response to the Ukraine crisis, versus 26% who think Brexit has weakened Britain’s response. This balance of attitudes reflects the fact that, while those who voted Leave in 2016 overwhelmingly believe that the UK’s response has been strengthened by Brexit (+41), those who voted Remain are much more evenly split (-10). 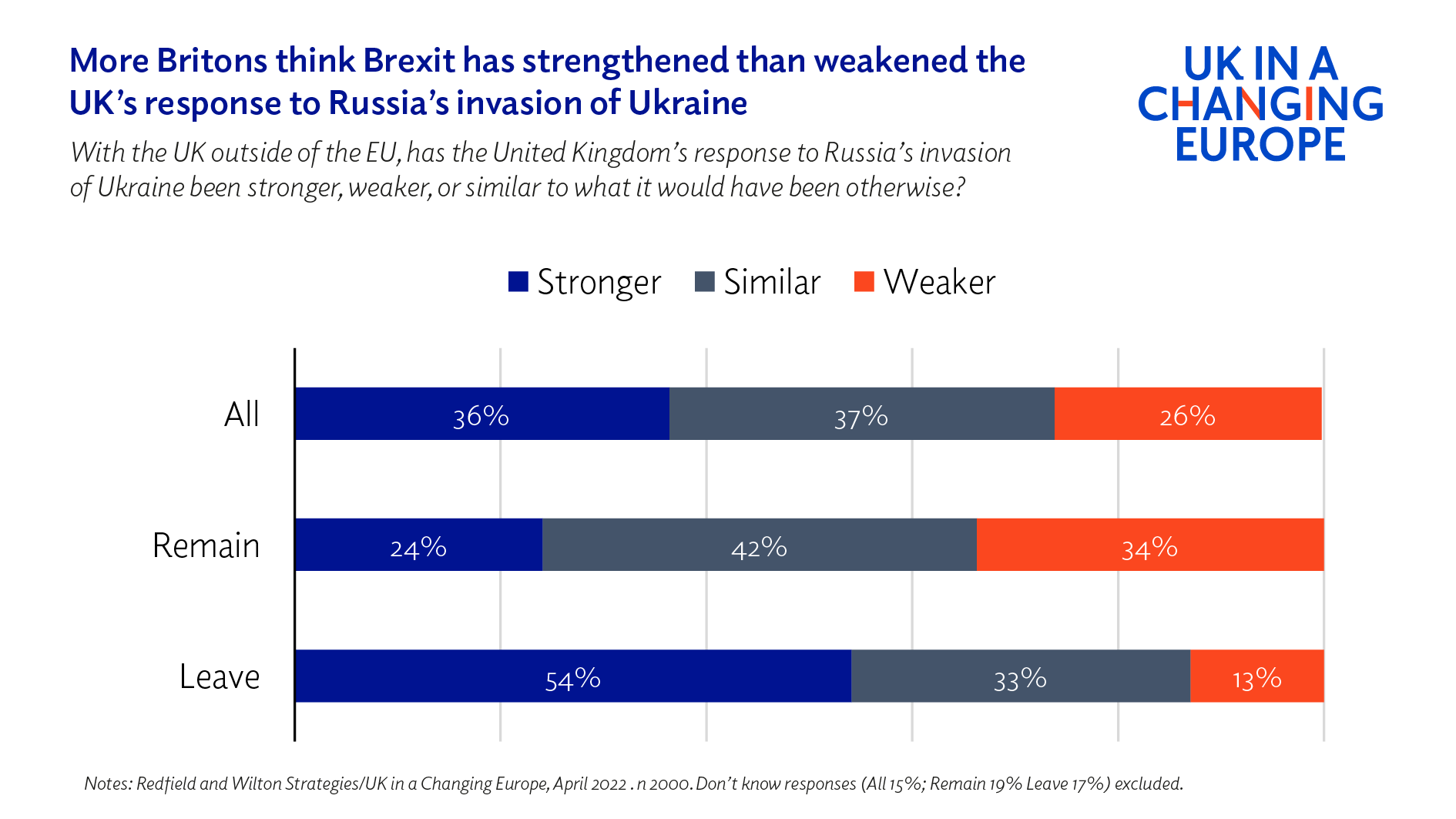 4. The public have a much more favourable perception of the UK and US response to the Ukraine crisis than that of EU Member States

It is striking that the British public are more likely to have a positive view of the US response to the crisis than of that of its EU allies. Looking under the bonnet of these results, this is likely to be driven by pre-existing perceptions of these countries, rather than any particular response during the crisis.

After all, clear Brexit divisions explain much of the difference. While there are small differences in support among Remain voters with a less positive attitude towards the US (a net positive score of +24) as compared to EU allies (France +35, Germany + 34)  Leave voters are significantly more positive about the US (+ 49) but have a significantly less positive view of the response of France (+11) and Germany (+16). 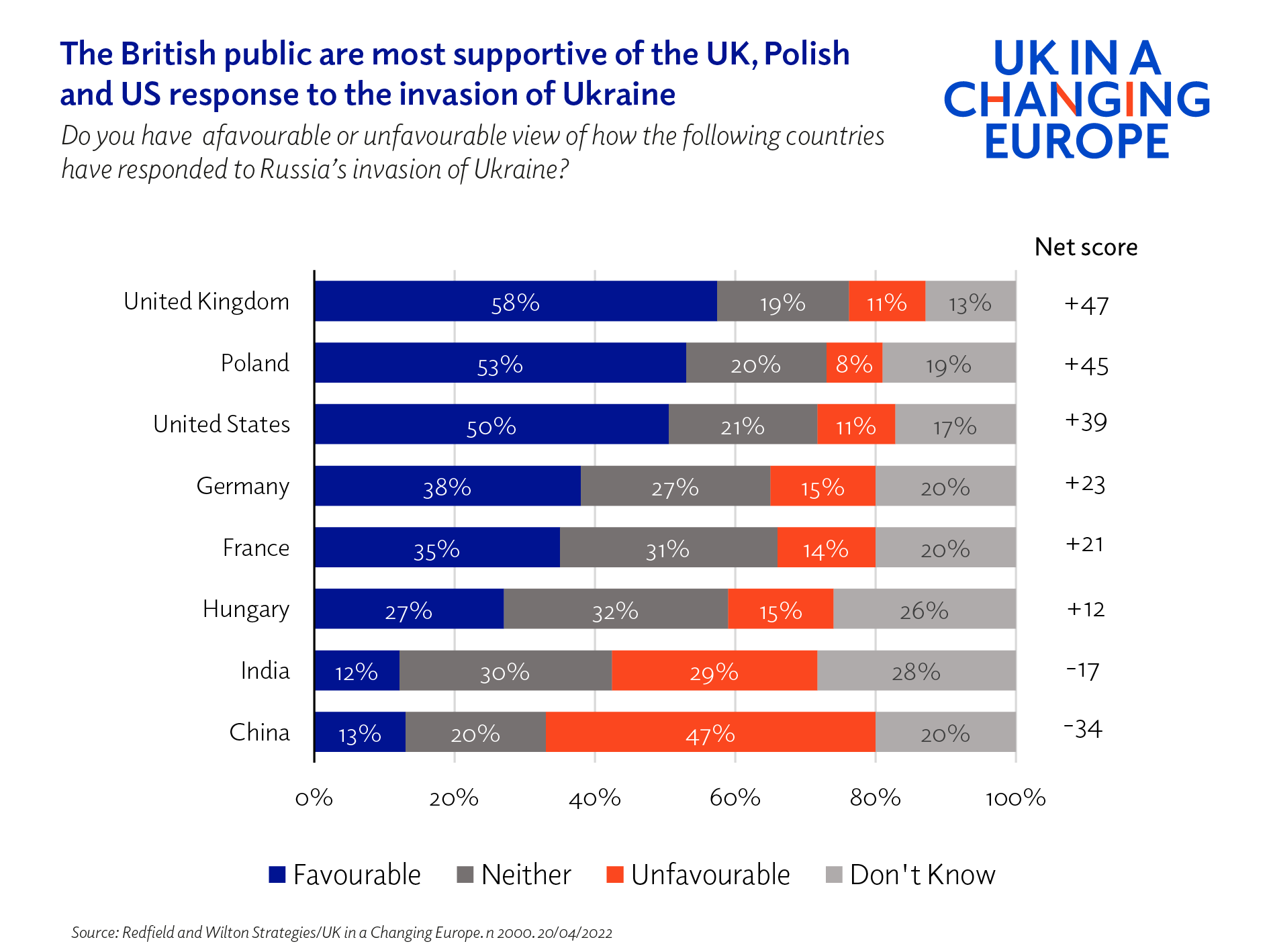 5. However, voters still think the Government should prioritise cooperation with the EU on Russia over the US

However, voters are still more likely to think it is more important for Britain to align with the EU on defence and Russia than with the US, signalling a clear appetite for collaboration with our European neighbours.

Given the war in Ukraine is now taking place within the EU’s neighbourhood, it is perhaps unsurprising there has been a small shift away from the idea that the US relationship is most important. 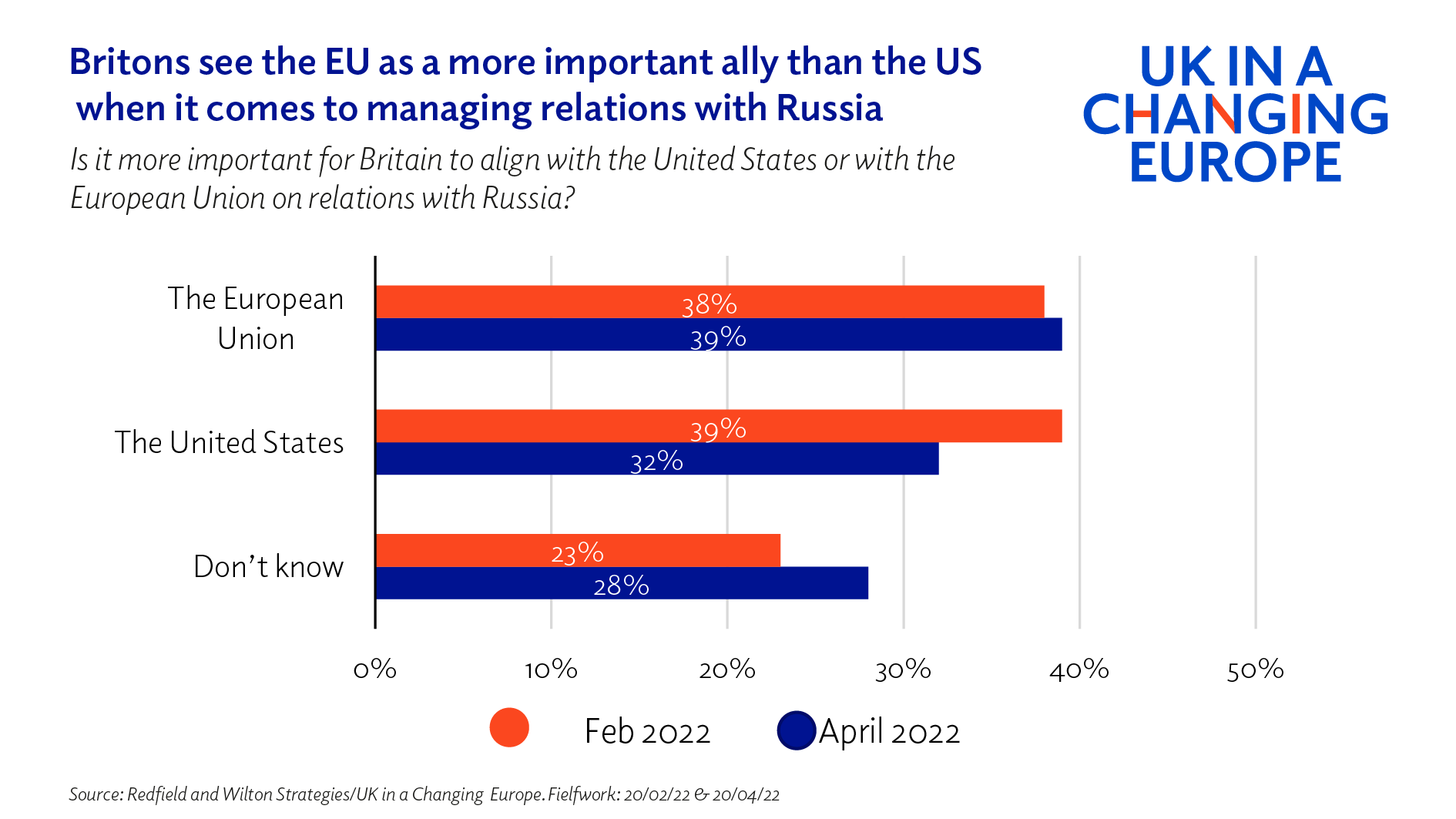 By Sophie Stowers and Alan Wager, Researchers at UK in a Changing Europe

This polling was conducted part of a regular partnership with Redfield and Wilton Strategies. You can explore all the results from the polling here.