What just happened in Northern Ireland and what does it mean? 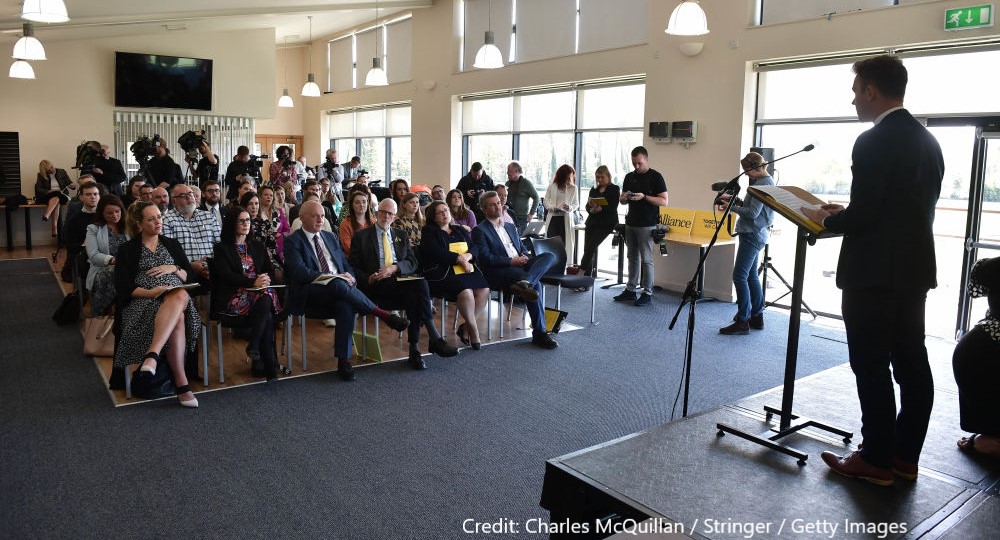 Hats off to the pollsters – the predicted trends for the NI Assembly Election last week were right. Sinn Féin topped the poll. Alliance received a great boost. The DUP lost support. But despite all the advance notice, the results of this Assembly election still come as something of a shock to the system. What just happened and what does it mean?

There have been plenty of headlines about Sinn Féin ‘winning’ the NI Assembly Election. If this was a ‘first past the post’ election, that would be true. In first preference votes, Sinn Féin’s 250k is 66k ahead of the DUP’s 184k. In the 2017, the DUP secured 225k first preference votes – just over 1.1k ahead of Sinn Féin. So the rise in support for Sinn Féin may be significant, but it is the decline in support for the DUP that is most striking.

The DUP’s support appears to have leaked both to the Traditional Unionist Voice (TUV, a strongly anti-agreement and anti-Protocol party) and to the centre ground Alliance Party. To some degree, this reflects fragmentation within unionism – different responses to the new post-Brexit landscape of the UK, differing viewpoints on ‘issues of conscience’ such as gay rights and abortion.

It also reflects – the DUP must acknowledge – a certain unhappiness with its performance over the past few years. The internal travails of the DUP itself reflect this, with its threefold change of leaders within the space of two months, local councillor resignations and loss of two MLAs from the party. So we should bear in mind as the DUP decides its next move that its priority is finding solid ground on which to secure its position, let alone ‘Northern Ireland’s place in the Union’.

The losses of the DUP are starkly seen in the percentage breakdown of the first preference votes (FPV). Sinn Féin won 29% of the FPV, just a 1 percentage point rise on 2017. The DUP, on the other hand, won 21.3% – a drop of 6.7 percentage points. Perhaps the real ‘winners’ in these terms are the TUV, which leapt by 5 points on its 2017 performance to take 7.6% FPV, and the Alliance party which rose by 4.4 points to gather 13.5% of the FPV. Two very different parties representing utterly different responses to the present-day challenges facing Northern Ireland.

The DUP (and perhaps the British Government) is seeking to take comfort from the fact that the proportion of FPV cast for Unionist candidates is 43% compared to that for Nationalists at 40%. This is not dramatically different to the results from 2017, which were 45% FPV for Unionist parties and 40% for Nationalist parties. What is different is the rise of support for the Other parties, which has risen from just over 13% to 17%. [I am classifying People Before Profit as such because this is how they designate in the Assembly, even though they do wish to see a border poll and a ‘radical, reunified Ireland’.]

And it is the success of the non-aligned Alliance Party in particular that is reflected in the new makeup of the Assembly. Northern Ireland uses a PR-STV (Proportional Representation – Single Transferable Vote) electoral system deliberately to produce an Assembly that best reflects common ground among the electorate. A rise in FPV might be good for a party’s ego, but it is whether they can attract second or third preference votes that matters.

As well as gaining more FPV, the Alliance Party gathered lower preference votes from across the political spectrum. It thus more than doubled the seats it held in the Assembly (now 17) by winning them at the expense of DUP, SDLP, UUP and Green Party incumbents. It is also why the TUV did so poorly in the end, because too few non-DUP supporters were willing to give it even a lower preference vote.

Ultimately, what does all this mean? The biggest change in the Assembly by far is the fact that there will be now 18 MLAs designating as ‘Other’ compared to just 11 in 2017. There will be 37 Unionist MLAs and 35 Nationalist MLAs. This represents a significant drop for both designations from 2017, in which Unionists held 40 seats and Nationalists held 39. The centre ground has coalesced around the Alliance Party, and it will constitute a significant new bloc in the Assembly.

There are other allegiances and common standpoints between MLAs that will be even more  apparent, and rapidly so. 63 of the 90 MLAs want a new Executive formed right away – a process to begin with Sinn Féin nominating the First Minister. 27 MLAs think differently, with the DUP having made it clear that it won’t nominate a deputy First Minister without reform to the Protocol. Indeed, in the light of the results, their position appears to have hardened: ‘No Executive as long as the Protocol is in place’.

All the parties want to see some adjustment to the Protocol (as even the EU has acknowledged needs to occur), however, some are more hardline than others. The DUP and UUP are agreed there should be ‘no sea border’, although the latter wants an alternative to the Protocol negotiated by the UK and EU, whereas the DUP would gladly see the UK take matters into its own hands to remove it. The majority of MLAs (54 to 36) were elected on platforms supportive of the Protocol and keen to see it remain.

There are difficult negotiations ahead, among the parties and between the UK and EU. All those involved will have to keep the realities of the situation in mind: there is no rush to a border poll just as there is no imminent threat to the union. The real urgency is for Northern Ireland to have a fully functioning Executive reflective of its new Assembly, as is every voter’s democratic right.