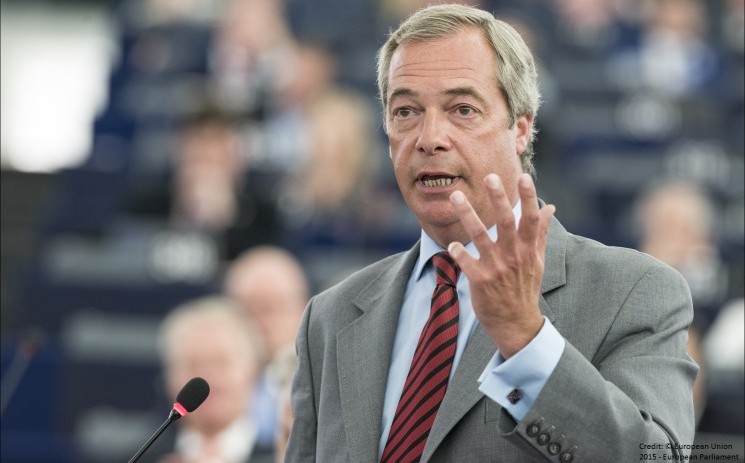 Some 200 years ago, Britain, France and Austria agreed a treaty designed to counter their common rivals, Russia and Prussia. It was signed in secret by the British foreign secretary Viscount Castlereagh and his opposite numbers, the French Duke of Talleyrand and the Austrian Prince of Metternich.

No one, of course, remembers the treaty but the names of its authors and signatories may ring one or two bells for some people.

Castlereagh was one of Britain’s heartless governing class named in Percy Shelley’s poem Masque of Anarchy, now something of an anthem for Corbynistas everywhere. Talleyrand and Metternich are probably best remembered for a famous quote.

The latter, on hearing of the death of the former, is said to have remarked “I wonder what he meant by that”. His reaction beautifully captures how those observing or involved in politics are obsessed with (over) interpreting the every move of the main players.

Which brings us neatly to the decision by Nigel Farage not to stand Brexit Party candidates in the constituencies won by the Conservatives won in 2017. Hours of airtime and acres of newsprint have been consumed in offering more or less convincing explanations for his decision.

And you can see why. Clearly the stand-down was a climb-down from a politician normally inclined to cross the street to get into a fight rather than avoid one. But that isn’t the strangest aspect of the decision.

No, the weirdest thing is Farage’s seeming determination to carry on the fight in constituencies that the Tories need to gain to win the election. These are seats that voted Leave in 2016 but have traditionally been held by Labour.

Johnson hopes that support for Brexit in these areas will deliver him a parliamentary majority if he can convince voters who traditionally back Labour to support him. But splitting the Leave vote with Farage puts that in jeopardy.

To be effective, any pact with Farage worth the name would have had to centre on marginals in the West Midlands. And the so-called Labour “red wall” that the Conservatives are aiming to breach in the North is a far greater risk in these areas.

But, with nominations closed, the Brexit Party still appears set on standing candidates in those (and plenty of other) seats.

Sure, what Farage has offered Johnson improves the latter’s chances of holding off the challenge from the Liberal Democrats in south-west England and the Scottish National Party in Scotland.

It also sends a pretty clear signal to those Leave-supporting voters not naturally inclined to support the Conservatives that, if they really do want to “get Brexit done”, then they’d better hold their noses and vote Tory.

Yet, as it stands, Farage is only offering Johnson half a loaf. What, then, is he playing at?

In trying to work that out – wondering for example whether it’s down to some desperate need on Farage’s part to maintain his place in the limelight for just a little longer – perhaps we are all over-interpreting and over-complicating things.

Rather than messing about with Metternich, maybe we should be opting for Occam and his razor. Maybe it would be better to take the explanation that requires the fewest assumptions.

On that basis, then, we should give up the attempt to get inside Farage’s head – which will doubtless come as a relief to many.

Perhaps the simple fact is that this is a man who has spent his life in politics campaigning to get the UK out of the EU, ideally in a form that leaves it completely untethered from Brussels.

Having helped push the Conservatives into dumping Theresa May in favour of Johnson – a prime minister who, especially if he wins a comfortable majority, looks likely to be able to pass a hard Brexit through parliament and may even be persuaded to go for a no-deal departure – Farage knows he is close to getting what he’s always wanted.

Yet he is simultaneously in danger of throwing it all away by splitting the Leave vote.

However, because Johnson cannot be trusted, it surely makes sense, for a few more precious weeks at least, to maintain the pressure on him to make more and more public promises as to what will happen in post-withdrawal trade negotiations before eventually granting the PM what he really needs.

Putting it bluntly, Farage is paying Johnson to do a job. As in all good gangster movies, it’s a case of half now and half when the job’s done.

In an ideal world, for Farage anyway, that second transaction would only be made once the UK has actually left the EU. But in the real world, a binding (or at least supposedly binding) manifesto commitment covering next year’s negotiations will probably have to do.

If and when that commitment comes, then don’t be surprised to see Farage handing over the other half of the payment. It won’t be in used £50 notes in a big brown envelope but in what Johnson sees as the most valuable currency of all: an announcement a few days before polling day by the Brexit Party’s leader that Leavers should vote, not for his candidates, but for the Conservatives.

That announcement, if it happens, won’t of course guarantee a Conservative victory on December 12 but, for Boris Johnson, could make winning a whole lot easier.

By Tim Bale, Deputy Director at the UK in a Changing Europe and Professor of Politics at Queen Mary University of London. This piece was originally published in The Conversation.