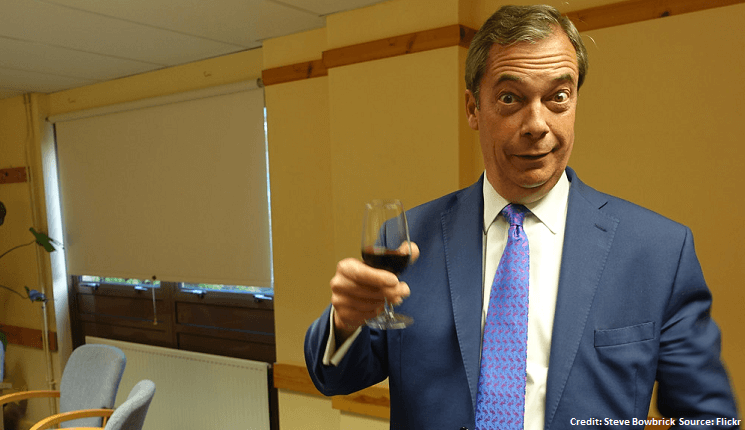 Of the 29 seats won by Nigel Farage’s Brexit Party in the European elections, eight were taken by women. At 28%, this is far short of the proportion of women in the electorate, but not dissimilar to the gender split of political representation in many other parties, especially those on the right.

But it’s when you look at who voted for the Brexit Party that the figures get really surprising. Something about this party makes it far less attractive to women than to men.

A YouGov poll conducted at the end of May shows that the Brexit Party has the biggest marked difference in voting preferences between the sexes of all the political parties. While 26% of male respondents would cast a vote for the party, only 18% of women would.

This means that while the Brexit Party would top the poll of men’s votes, it would come fourth among women. In this ranking, the Liberal Democrats land narrowly in first place, with 22% of women’s votes. The Conservatives and Labour follow, both with 21%. You could even infer from these results that women may have played a part in swaying the result of the recent Peterborough by-election, with just 606 votes between Labour and the Brexit Party.

What would happen in a full-blown general election is of course unknown, but we do know that in recent years gender has been a critical factor in election results. In 2017 there was a sizeable gap in party support between men and women. In particular, significantly fewer women than men voted Conservative, a factor that hindered the party’s ability to secure a majority.

Women make up 51% of the adult population and a greater proportion of the electorate, so if the Brexit Party is serious about making a breakthrough into Westminster, and others are serious about winning a majority, they can ill afford to ignore women’s votes.

Although there was no sizeable difference between men and women’s support for Brexit in 2016, women do tend to be less supportive of a hard Brexit. While 18% of men think that leaving the EU without a deal would be a very good outcome, only 11% of women hold this position.

Beyond Brexit, there could be other factors at play too. Compared with men, women are generally less supportive of spending cuts to public services, and this is even true among supporters of parties of the right. Women are also more likely to give priority to healthcare and the NHS. The YouGov poll found that 37% of women selected health as one of the three most important issues currently facing Britain – ten percentage points more than the 27% of men who felt the same.

So although the Brexit Party has focused solely on the issue of leaving the EU, media coverage of Farage’s position on opening up the NHS to more privatisation might have a bigger, negative impact on women’s vote choice than men’s – especially if US access to the NHS in a future trade deal continues to be a live issue.

When it comes to tax and spend, many (but not all) hard Brexiteers take a libertarian view, favouring lower tax and lower public spending. This might have turned women voters off the Brexit Party, as they tend to prioritise welfare spending over tax cuts more than men.

Increasing tolerance may also be a factor for the party’s poor showing among women. Rates of racial prejudice have fallen more quickly among women than men, and although Farage states that neither he nor the Brexit Party tolerate racism, his comradeships with the US president, Donald Trump, the Italian deputy prime minister, Matteo Salvini, and France’s far-right politician Marine Le Pen are probably not helping the party’s efforts to be seen as inclusive and welcoming.

Nor is Farage’s personal style helping – clear as its appeal may be for many (mainly male) voters. Women are almost 50% less likely than men to rate Farage favourably. We can’t be certain why this is, but his “bloke down the pub” image doesn’t necessarily make a positive impression among all women.

Added to the Brexit Party’s woman problem is its generational one. Unsurprisingly, given the age divide in Brexit/Remain support, the party fares poorly among the under 50s, with just 5% of those aged 18 to 24 intending to vote for them, compared with 33% of over-65s.

So while Farage will have to appeal to a broader slice of the electorate if he’s to overtake the established parties that have long dominated Westminster, his current voter-targeting strategy mostly appears to be successful in recruiting the old boys.

By Rosie Campbell, Director of the Global Institute for Women’s Leadership and Professor of Politics, King’s College London. This article is republished from The Conversation under a Creative Commons license. Read the original article.