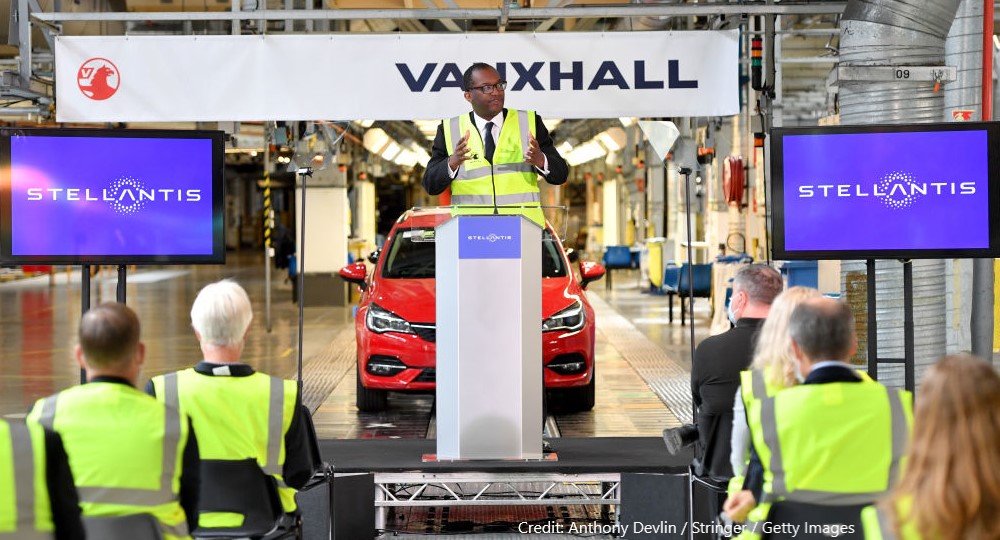 News that Nissan plans to build a new battery electric vehicle (BEV) at its Sunderland plant has been welcomed as a ‘pivotal’ moment for UK auto after Brexit by Boris Johnson. Nissan’s battery partner, Envision, will build a huge new battery plant (a ‘gigafactory’) next door to produce the batteries needed for the model.

The investment safeguards Sunderland’s medium-term future, and is clearly welcome news. It is the first concrete investment in large scale battery manufacturing in the UK – a move that is vital for the auto industry as we approach a 2030 ban on petrol and diesel cars.

But it’s only a first step and much more will be needed.

As the Society of Motor Manufacturers and Traders (SMMT) has stressed, the nine gigawatt hours (GWh) per year of capacity committed by Nissan and Envision makes up less than a sixth of the 60GWh per year that will be needed to support mass car production in the UK as the industry rapidly transforms towards an electric future.

There’s also a Brexit dimension to the battery race. The UK-EU Trade and Cooperation Agreement fired a starting gun on battery investment, as after 2026 the battery in a UK- or EU-made BEV has to come from the UK or EU to avoid tariffs between the two.

The EU has already committed over €6 billion to the European Battery Alliance to develop a battery supply chain across the EU. That is in addition to substantial support from national governments across the EU.

Hungary, for example, has a special economic zone where battery makers and car makers can invest in battery production and receive generous tax breaks. The UK’s £500 million seems pretty small beer in comparison.

Some 20 battery gigafactories are already up and running, being built or planned across the EU. Some of these are massive.

The Tesla gigafactory under construction near Berlin (which Tesla’s ‘Technoking’, Elon Musk, chose over Britain owing in part to Brexit uncertainty) will likely end up with around 50GWh of capacity per year, compared to Sunderland’s 9GWh.

Volkswagen, meanwhile, is planning six gigafactories with a total capacity of target of 240GWh, and Stellantis is starting with 50Gwh at two plants in France and Germany, and discussions are ongoing with the Italian government for a third.

It’s all about scale. The huge size of these gigafactories is key to producing at scale and getting battery costs down, in turn reducing the cost of battery electric vehicles and making the latter more affordable in the mass market.

As costs fall, there is likely to be a tipping point, around the middle of this decade, when BEVs out-compete internal combustion engine (ICE) cars. From that point there won’t be many reasons to buy an ICE car.

Because batteries are large, heavy and expensive to transport, future car production will likely require car factories and battery plants to be in close proximity to each other. That raises a question mark over the long–term viability of Stellantis building electric vans at Ellesmere Port, given that batteries are likely to be imported from France.

Anchoring Stellantis assembly at Ellesmere Port and Luton in the UK will likely require another battery plant here. The same will go for other car firms too.

It is no surprise that the Nissan announcement came shortly after the government unveiled the Subsidy Control Bill, which it says gives it more flexibility and power to support businesses.

Importantly, the UK never really exploited the state aid space it had under EU regulations, and so what may have changed is a willingness to intervene to use state aid to support manufacturing.

The UK government is thought to be in discussion with a number of battery manufacturers, but they are also being wooed by EU countries. And car firm bosses are very good at playing divide-and-rule strategies to play governments off against each other to get the best aid package.

So trying to land these gigafactories will be an expensive business, and there will rightly be questions about value for money and public accountability.

The government is coy about what was offered to Nissan and Envision (or to Stellantis regarding electric van production).

In the Nissan case, the FT suggests that the government has committed around £100 million, with as much as £80 million from Sunderland City Council and a partner firm to create a sustainable microgrid to power the site. In the Stellantis case it is thought to run into the tens of millions of pounds.

Of course, the government would have offered support even if the UK was still in the EU. But outside of the Single Market and Customs Union, Nissan was in a stronger position to extract as much support as possible.

Indeed, if Nissan had instead invested somewhere else, it would have been a pretty clear signal that the UK was a less attractive investment location after Brexit. That was a scenario the government was desperate to avoid.

Nevertheless, if we want to keep mass car making in the UK after Brexit, then we will need this investment in large scale battery making.

UK auto is going to need a lot of batteries if mass car making is to be retained in the UK. Without it, car making is likely to gravitate towards EU countries where heavy investment in large-scale battery making is already well underway.

The big risk here is that unless we make batteries in the UK we will probably lose our mass car industry.

By David Bailey, Professor of Business Economics at Birmingham Business School and Senior Fellow at UK in a Changing Europe.