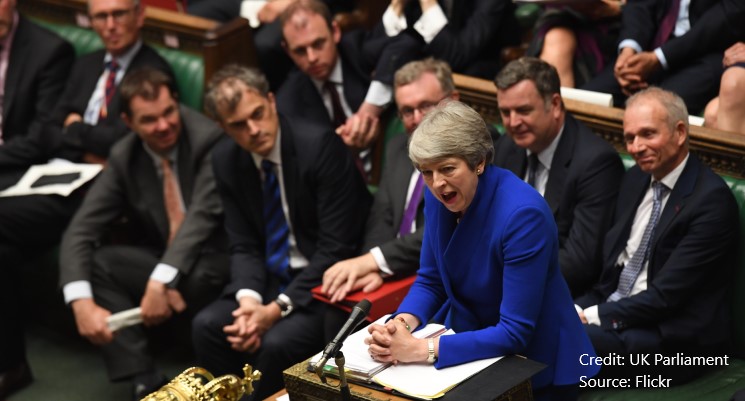 In the UK our politics has been dominated by one story and one story alone for the last three and a bit years: Brexit.

It has led to total paralysis in the British political system.

With no consensus in parliament and Boris Johnson’s pledge to take the country out of the EU “do or die”, the prospect of a no-deal Brexit is very real indeed.

The deadlock faced by our political class is unprecedented in the post-war era.

One solution to the impasse was suggested by the only Green Party MP, Caroline Lucas. In August 2019 she proposed an all-female “Emergency Cabinet” to block a no-deal Brexit.

This suggestion drew derision, bemusement and cries of sexism from all sides of the political debate.

Citing the pivotal role Christiana Figueres and Ségolène Royal played in bringing about the Paris climate agreement, as well as Betty Williams’ and Mairead Corrigan’s activism that kickstarted the Peace People’s movement during the darkest days of the Troubles in Northern Ireland, Lucas argued that women do politics differently.

While there is some debate as to whether this is the case, there is a rich seam of feminist theory on the importance of women’s presence in the political process.

And the gender-justice argument cannot be overlooked: women make up half the population so should make up half of the voices in political debate.

As Lucas highlighted, this gap in women’s representation is never more apparent than in the Brexit process – and it has been since day one, when Theresa May appointed three men to the positions of foreign secretary, international trade secretary and Brexit secretary to carry out the UK’s negotiations with the EU.

Notice any similarities? The full cabinet has nine women members, so why not give one a seat at the table?

The most puzzling omission is Home Secretary Priti Patel – she holds one of the great offices of state, and you might think her input was a necessary addition, particularly given that, as the government itself has acknowledged, a no-deal Brexit risks causing civil disobedience, undermining national security and leading to increased immigration checks.

Boris Johnson isn’t the only one who has form when it comes to excluding women from the key sources of power in British government. Just look at his neighbour’s team at Number 11, the residence of the chancellor.

Arguably the most powerful government department, the Treasury is now run by an all-male ministerial team, led by Sajid Javid.

Decisions made by Treasury officials in the event of a no-deal exit will be hugely consequential to the future of the UK.

The obvious counterargument to the charge that women have been silenced in this process is that our second-ever female prime minister, Theresa May, was in charge of Brexit for three years.

The symbolic power of having a woman in the highest political office of the nation cannot be denied, yet within months of taking office May was subject to the usual slurs often directed at female politicians.

The “Maybot” cartoon, a caricature of an unfeeling robot with no capacity for empathy, took on a life of its own, illustrating the age-old double bind for female leaders that you are either too sweet to lead or to shrill (or robotic in this case) to like.

The seeds of the Maybot nickname were sown during May’s leadership election, when she was challenged by fellow leadership contender Andrea Leadsom for not having children and therefore less of a “stake in the future”.

Another aspect of May’s premiership is also borne out in the leadership literature.

While many are familiar with the “glass ceiling” that stops women from reaching power, the “glass cliff” appears when women are promoted at a time of crisis: when they fail to solve the mess they have inherited, they fall or are pushed off the cliff.

May’s trajectory clearly maps onto this – in the wake of an unexpected referendum result she was almost immediately selected as prime minister, endured a shaky general election, had her exit deal rejected repeatedly by parliament, before being metaphorically pushed off the cliff and being forced to resign.

The final insult is that when women have “had a go” at being leader and failed, there is a retreat back to the old norms of alpha male leadership.

So why does this matter?

Aside from the gender injustice of having only one half of the population taking decisions on the most significant political process since the Second World War, the impact of a no-deal Brexit will disproportionately affect women, according to research by the Women’s Budget Group and the Fawcett Society.

In particular, they raise the devastating effect an economic downturn would have on sectors with a high proportion of female workers, such as food, clothing and textiles.

Any downturn, whether as a result of a no-deal or any other type of Brexit, will lead to reduced economic growth. And as we saw during the recent years of austerity in the UK, slow growth is usually offset by government cuts that hit women hardest.

Without women in the rooms where power lies, decisions will be taken on what type of Brexit the UK pursues, and on how to mitigate any potential fallout, which do not represent the will of the people – whether they voted Leave or Remain.

How could they with half of the population unrepresented? If we don’t redress this imbalance, it’s women who will yet again pay the price.