No deal is back on the Brexit table 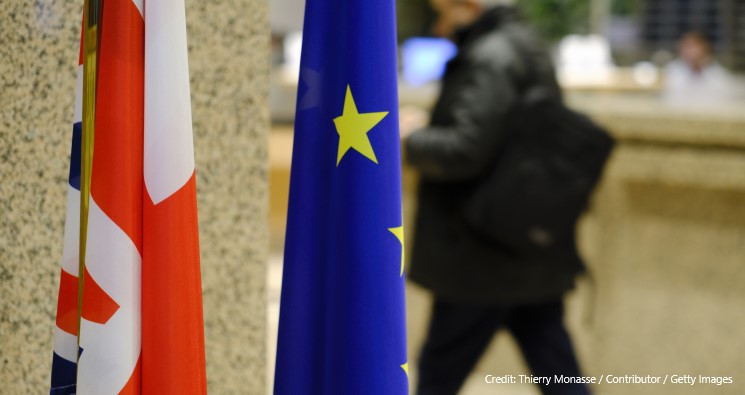 “Senior No 10 sources” have been at it again. This time, telling the Sunday Times that the UK is prepared to walk away from the Brexit negotiations should the EU fail to display greater flexibility.

No deal, in other words, is back on the Brexit table. Indeed, as we explain in a recent report, a no trade deal outcome looks as likely as it ever has.

But what difference would it make in the context of the disruption that Covid-19 will already be causing?

It’s worth starting by saying that no deal now is not the same as under Theresa May. For one thing, there is now a Withdrawal Agreement in place.

This sorts out the money that the UK owes the EU, the issues of citizens’ rights and, to an extent, the fraught question of Northern Ireland (on which more in a minute).

This was doubtless the point that Michael Gove was making in parliament when he declared: “We can’t have a no deal scenario because the withdrawal agreement is a deal.”

What we can have, however, is a no trade deal scenario. And here lies the other difference with the situation under May.

The logic underlying government thinking, as spelled out recently by James Forsyth, seems to be that the “disruption caused by coronavirus means the costs of leaving without a trade deal are lower than they have ever been.”

From an economic perspective, there is considerable force to this argument, at least for the longer term.

The kind of trade deal being sought by Boris Johnson is far thinner than that which her predecessor had negotiated via the much-maligned all-UK backstop, which would have kept the UK in a de facto customs union with the EU.

That lack of ambition means that even in the unlikely event that the UK gets exactly what it wants from the EU – a trade deal with no or few tariffs – significant adaption to our current trading practices will be needed.

Our modelling suggests that no trade deal – trading on “WTO rules” would, over the long term, reduce UK GDP by about 8% (or £2,000 per head); but the type of deal advocated by the government would only reduce that damage by a fifth.

So, the argument goes, a trade deal would be nice, but hardly top priority.

However, there are a number of assumptions doing a lot of heavy lifting here.

First, that coronavirus will dwarf the impact of any cliff-edge in January 2021, both economically and politically.

It is certainly true that, as the Institute for Government have pointed out, the “ordinary processes of a modern economy” can continue under the latter but have ground to a halt as a result of the former. But this cuts both ways.

One of the success stories of the recent period has been the resilience of food supply chains despite the disruptions imposed by lockdown. The checks and tariffs that would accompany a no deal mean that disruption in this area will almost certainly be more apparent than it is now.

It would be a brave (and arrogant) economist who, given the uncertainties, would predict how Brexit will interact with the aftermath of Covid-19. What is, however, certain is that while both affect not just the UK but the EU and indeed the world, they affect us more.

And the Covid-19 outbreak has been both more serious and more prolonged than in the EU, with more deaths here than in even the worst hit European countries, let alone the average. The combined impact, in other words, will be significant.

The second argument is that what really matters, for both Covid-19 and Brexit, is not short-term disruption – which may be painful, but transitory – but the long-term structural impacts on the UK economy.

In other words, both represent a permanent economic shock, to which business and the economy will have to adjust.

Adjustment has costs – investment, reshaping business models, and restructuring supply chains – and will be painful for some.

Surely those costs will be minimised if those two shocks are synchronized? With one bound, the UK economy will shift to a new post-Brexit, post-Covid model.

Again, this is hard to model, but suffice it to say that this view is not popular in the business community.

What is certain is that it would represent a huge gamble – the capacity of the UK economy to withstand an extended period of “creative destruction” and emerge stronger on the other side – that has its most obvious recent analogy in the Thatcher era of deindustrialization.

More broadly, the political implications of a no deal outcome threaten to be every bit as significant as its economic fallout.

Should the negotiations collapse, the outcome will doubtless be a period of mutual recrimination as both sides point the finger of blame at the other. And there will be obvious flashpoints where things could easily spiral out of control.

To take one example, the British government has (finally) admitted that, even with a deal, there will need to be some checks in Northern Ireland, albeit that it has made it clear that it intends to limit these as far as possible.

With no deal at all, however, given the fundamentally different relationship with the EU that Northern Ireland and Great Britain would have when it comes to goods, those checks will be more intrusive and the border more obvious. Will this be manageable? And we haven’t even mentioned fish.

And all this in the context of a world in which many in the west are reconsidering their relationship with China, while Donald Trump continues to generate doubts about the future of the transatlantic bond.

Cross-Channel tensions would hardly help either side craft a sensible and collaborative strategy to address such international uncertainties.

The gap between deal and no deal is certainly smaller than it was under Theresa May. And Covid-19 may indeed alter that calculation still further. Yet, even so, no deal would still be a big deal.

By Professor Anand Menon, director of UK in a Changing Europe and Professor Jonathan Portes, senior fellow. This piece was originally published by the Huffington Post.