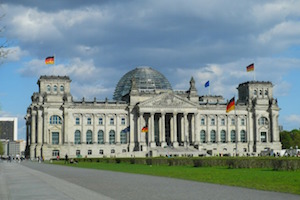 When David Cameron came to visit Berlin at the end of May, Angela Merkel adopted a conciliatory tone. The German chancellor did not categorically exclude any changes to the European treaties and declared the EU was no ‘social union’.

This sounds as if there was a considerable understanding for the British position and a certain openness for British reform demands. However, these statements were mainly meant to create a constructive atmosphere and avoid escalation only a few weeks after Cameron’s re-election.

There are indeed points of convergence. Like in the UK, there is an increasing feeling in Germany that the EU is in need of reform. In some respects, the positions are similar.

A substantial number of politicians in Germany are in favour of strengthening the role of national parliaments in the EU. They argue that the EU needs stronger democratic control but are sceptical about the role of the European Parliament (EP) in this respect as it has seen decreasing voter turnout and, despite a strong increase in its control powers, is still seen as rather remote from citizens.

Also, Merkel’s centre-right Christian Democrats see the UK as a supporter of economic freedoms and a strong internal market in the EU, against state intervention and national protectionism. For any possible military cooperation in the EU, which has re-emerged on the agenda during the Ukraine crisis, UK support is seen as highly important.

Finally, the Christian Democrats might also agree on limiting ‘abuses’ of welfare state benefits by EU citizens. The German system is based on the assumption that those who receive benefits have also made substantial contributions to the system’s financing or spend their benefits in Germany. For many years now, ‘welfare abuses’ are a standard topic in the media and meet with some resonance among the voters. During the Euro crisis, the German public at large has become more sceptic towards transfers of taxpayers’ money to other member states.

However, strengthening national parliaments and reducing some welfare state entitlements for EU citizens may already describe the common ground between Germany and the UK.

In a broader perspective, the differences are considerable.

German Christian Democracy has for many decades been a strong and consistent supporter of increased European unity. Although they do not say it in public so clearly any more, many Christian Democrats still think that a European federal state is the goal – necessary in order to ensure a viable defence and for remaining influential an a rapidly changing world where middle-sized countries such as the UK or Germany are too small to matter.

The Social Democrats, the second partner in the governing coalition, share many of these views and are in addition much more sceptical towards the ‘liberal’ British agenda.

In a shorter time horizon, the Euro crisis has changed everything. To put it simply: Germany is in, and at the steering wheel, and the UK is out and intends to stay so. This changes priorities and puts the two countries in very different worlds.

In the German public debate on Europe, the British referendum is still of rather low salience, constantly eclipsed by news about Greek debt or other issues from within the Eurozone.

Angela Merkel’s statement in the Bundestag ‘When the Euro fails, Europe fails’ is not mere rhetoric. Dealing with the Eurocrisis and its consequences, and creating a sustainable Economic and Monetary Union, consumes enormous amounts of political energy.

The new governance of the Eurozone is a fundamental change in the exercise of core state powers, and the sums involved are breathtaking. This limits the willingness to make advances to a country that is not even part of the Eurozone. From this perspective, the UK is a large and friendly but peripheral country that raises some reasonable points – but not many. And it has not much to offer in exchange.

The British demands for renegotiation, budget rebates etc. in the last three decades have also led to a certain fatigue of cherry-picking. While Angela Merkel tried to create a good atmosphere during David Cameron’s visit without making any concessions, other voices in Berlin warned against being too diplomatic because this could be misunderstood as agreement.

There are also red lines for Germany – free movement is one. And while Angela Merkel has not categorically excluded Treaty changes, others question why 27 member states should embark on this risky road for the sake of a single country.

Apart from strengthening national parliaments and a fine-tuned reduction of welfare benefits for EU citizens, a further strengthening of the Europe of different speeds looks like the most likely compromise.

But while the official rhetoric tries to avoid this imagery, the EU is increasingly divided into two groups: a centre (the Eurozone) which is not only characterized by crisis but also by massive political change, and a periphery (the rest). In this context, Germany and the UK are no natural allies.