‘No recourse to public funds’: EU nationals and Covid-19 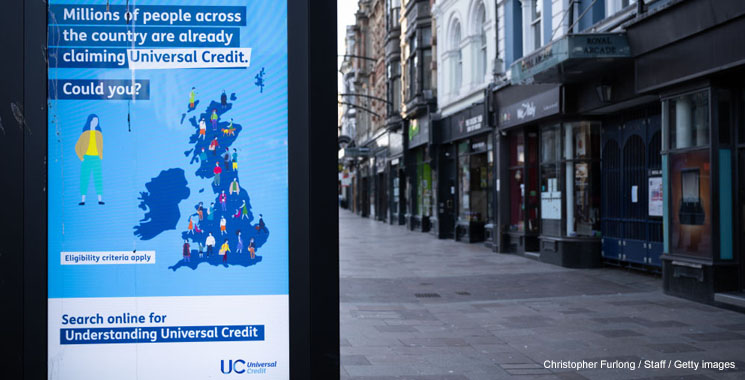 The Covid-19 outbreak is forcing everyone to learn things about the operation of the British state, including the Prime Minister.

One of the things he has had to learn is why some people are not entitled to Universal Credit (UC) when they are without work.

Part of the answer lies in the ‘no recourse to public funds’ (NRPF) condition for those with certain immigration status, namely non-EU nationals with limited leave to enter or remain.

Those who do not have access to public funds are being hit the hardest because the safety net provided to others in this time of hardship is not extended to them.

At the Liaison Committee on 27 May, Stephen Timms, chair of the Work and Pensions Select Committee, gave the example of a couple in his East Ham constituency with two children who were being forced into “destitution” as a result of NRPF.

The father’s employer didn’t put him on the job retention scheme, so he has no income; the mother’s income is less than their household rent.

They have leave to remain in the UK but with ‘NRPF’, so they get no help from the state at all.

In response, the Prime Minister said he would look at how the scheme works:

“You’ve raised a very, very important point if a condition of their leave to remain is that they should have no recourse to public funds. I will find out how many there are in that position, and we will see what we can do to help.”

So far that help has not been forthcoming, despite growing calls from the Local Government Association. This is a particular issue for those who are homeless.

At the height of the Covid-19 outbreak, local authorities put the homeless into emergency accommodation. However, that scheme is now ending and those with NRPF will shortly face homelessness again.

In Norfolk alone an estimated 10% of those placed in emergency accommodation during Covid-19 lockdown are considered to be ‘NRPF’. EU nationals who have moved to the UK under freedom of movement rules (and can still do so until the end of the year) do not have a ‘NRPF’ condition attached to their passport. However, many do face the same restrictions on access to public funds in practice.

It is not unusual in the advice sector for an EU national to be described informally as ‘NRPF’ and face the same barriers to support. This is because eligibility for welfare benefits and housing for EEA nationals and their family members is dependent on the ‘basis’ on which  EU nationals are living in the UK.

They are required to have the ‘right to reside’ or be a ‘qualified person’ or ‘exercising a Treaty right’.

Establishing these criteria can be complex, as is establishing benefit eligibility. For those most vulnerable, it can be a hurdle too high to pass.

In Great Yarmouth, for example, a seaside town in Norfolk, a group of homeless EU nationals living in a squat in the town centre were provided emergency accommodation by the local authority due to Covid-19 lockdown restrictions.

They have now been served notice that their emergency temporary accommodation is ending this week. One of the EU nationals has been able to find work and this means that she will be able to access to welfare support because she is now ‘exercising her Treaty rights’.

Due to Covid-19, the embassy where they need to make an application for a new ID is shut. They wait in limbo, facing certain homelessness and destitution again at the end of the month.

Homelessness during a global pandemic reveals the stark reality of the consequences of the ‘NRPF’ condition.

In Great Yarmouth, an ONS study in 2019 showed that the death rate of homeless people (relative to the population in the town) was double the national average and almost four times the regional average.

In 2015, a Portuguese man who was struggling to access benefits died in temporary accommodation in the town. The post-mortem found he had died of pneumonia and malnutrition. Reports at the time said that this man struggled to navigate the benefits system due to his English language skills and his benefits had been stopped in the period leading up to his death.

Coronavirus shines a light on a reality that already existed for many. Take the case of domestic abuse. Many EU nationals who are victims of domestic abuse are refused a place in a refuge due to their failure to satisfy the criteria of ‘right to reside’. They are not entitled to claim housing benefit which in turn pays the ‘rent’ in the refuge.

Research shows that a person is likely to have experienced incidences of domestic abuse 50 times before they seek support. This means that many who do seek support after sustained abuse are refused safe accommodation and face a stark choice of remaining with the perpetrator or certain homelessness.

Often the only solution that can be offered to an EU national in this position is to find employment. After Covid-19, the availability of such employment may be scarce.

Public funds, such as UC, can be a lifeline, and for many it will get them through a tough time so they can apply for a new ID and seek employment or so they can access safety and refuge and move away from a violent perpetrator.

NRPF, which applies to non-EU nationals in law and to EU nationals in fact, has proved an effective deterrent to those getting the help they need. This is something for the PM to learn.

By Professor Catherine Barnard, senior fellow at The UK in a Changing Europe and Fiona Costello, research associate, University of Cambridge.