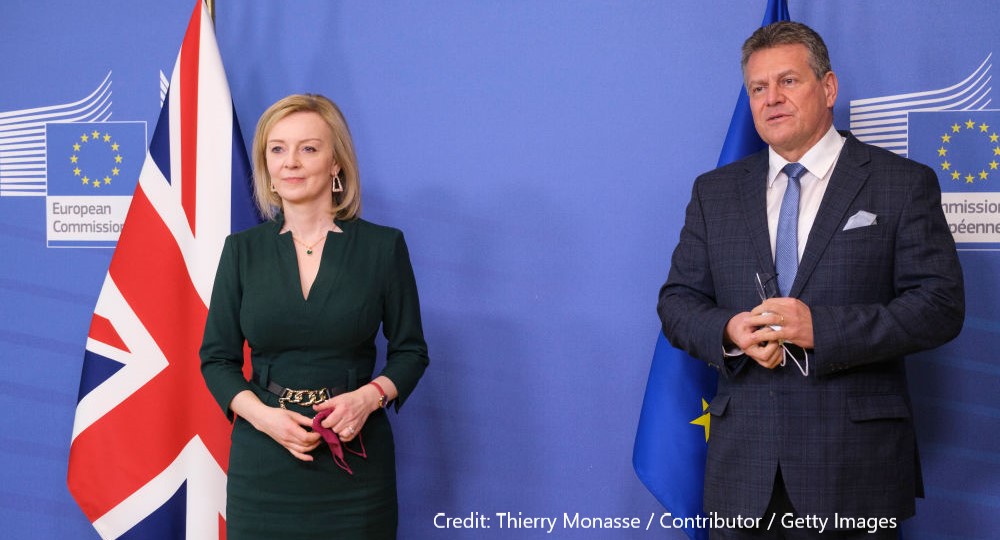 The Protocol on Ireland and Northern Ireland – an integral part of the Withdrawal Agreement – was agreed by the UK and the EU in October 2019. The Protocol keeps the border open following the UK’s departure from the EU in compliance with the Belfast/Good Friday Agreement.

However, it provides for checks on goods moving between Great Britain and Northern Ireland, since the latter remains in the EU single market for goods and EU member states need to prevent the entry of goods that do not meet EU standards or present unfair competition to EU producers. The principle that checks are carried out before they reach the island of Ireland was agreed between PM Boris Johnson and Taoiseach Leo Varadkar in October 2019, as the solution to the ‘Irish trilemma’.

When Boris Johnson spoke to the UK Parliament in October 2019, he called the Protocol ‘a good arrangement’ that reconciled ‘the special circumstances in Northern Ireland with the minimum possible bureaucratic consequences at a few points of arrival into Northern Ireland’ whilst ‘ensuring an open border on the island of Ireland’. The UK’s impact assessment published with the Withdrawal Agreement on 21 October lists the checks that will take place between Great Britain and Northern Ireland.

Days before the application of the Protocol came into force on 1 January 2021, the UK and the EU adopted decisions to facilitate the implementation of the Protocol. The UK agreed, for example, to provide EU authorities with continuous, real-time access to their relevant IT systems and databases as a solution to ease customs checks.

Both parties also agreed a series of temporary solutions. For example, medicinal products would enjoy a year-long exception and there were grace periods for trade in chilled meats and export certificates for supermarkets. The EU was clear that these solutions were of a ‘temporary nature’ and came with ‘strict conditions attached’.

Yet barely a month later, in a letter to his European counterpart, Maroš Šefčovič, Michael Gove called for extending temporary measures and grace periods and for finding permanent solutions. In his response, Šefčovič emphasised that solutions ‘agreed six weeks ago… urgently need to be fully and faithfully implemented’ before any ‘other facilitation is necessary and justified’.

However, by early March 2021, the UK government announced unilateral decisions to extend a number of grace periods agreed under the Protocol without informing the EU of its intention. As a result, on 15 March 2021, the European Commission addressed a Letter of Formal Notice to the UK, thereby launching an infringement process.

In the interest of reaching a deal in October 2019, the EU had agreed that UK authorities would carry out the checks on goods entering the single market between Great Britain and Northern Ireland under the oversight of the EU. The EU regarded the UK’s actions early 2021 as not only a failure to implement the Protocol, but illustrations of bad faith.

Lord Frost has since explained that, although the UK had signed the deal in good faith, ‘we knew that some aspects of the Protocol … were problematic. We did not particularly support them ourselves. We agreed with them because that was the right thing to do for our country overall looking at the wider political debate and the need to deliver on Brexit.’

By June 2021, tensions had escalated. PM Boris Johnson declared he was ready to invoke Article 16 of the Protocol whilst the President of the European Commission Ursula von der Leyen stated that ‘both sides must implement what we agreed on’. Article 16 is a last resort safeguarding mechanism that allows either party to undertake unilateral measures.

In July 2021, the UK published a new approach, in which it calls for the renegotiation of the Protocol. The EU promptly rejected renegotiation and insisted on developing solutions within the framework of the agreement. Nevertheless, the EU paused legal action against the UK over the Protocol breaches ‘in order to provide the necessary space to reflect on these issues’ and solutions for implementation. In October 2021, it put forward a set of proposals for ‘bespoke arrangements’ to limit any disturbance for Northern Ireland’s economy. The four ‘non-papers’ cover customs, sanitary and phytosanitary, the circulation of medicines and give Northern Ireland stakeholders a greater role in implementing the Protocol.

In December 2021, the two parties reached an agreement on the circulation of medicines. The grace periods for chilled meat products have also been extended indefinitely while talks on implementation continue. But, throughout the autumn of 2021, discussions between the UK and the EU were fraught, with the UK repeatedly emphasising its readiness to invoke Article 16 of the Protocol. Member states reportedly considered the possibility of suspending entire parts of the TCA in case the UK decided to unilaterally suspend parts of the Protocol.

Though relations did improve from January 2022, patience was running thin. For instance, Šefčovič recently expressed the EU’s frustration that the UK had still not provided the EU with access to their ­­relevant IT systems and databases nearly 16 months after it agreed to do so.

Furthermore, Boris Johnson’s confirmation in April 2022 that his government was considering legislation that would allow ministers to override parts of the Protocol exacerbated EU concerns. When reports emerged that officials in the Foreign Office had drawn up legislation and the UK Foreign Secretary Liz Truss indicated she will act unilaterally, Maroš Šefčovič issued a measured statement.

The Dutch Prime Minister adopted a similar tone, stating ‘It is not unreasonable for us to expect the UK to comply with that agreement’ and to ‘find the resolution within the framework of the protocol’. But a number of European leaders, including the German Chancellor, the Belgium Prime Minister and the Irish Taoiseach, have publicly warned London against unilateral action.

The UK’s standing was already damaged when it tabled legislation twice in autumn 2020 that put the UK in breach of international law. The latest flare up in tensions has further eroded trust with many doubtful the UK government really intends to facilitate implementation.