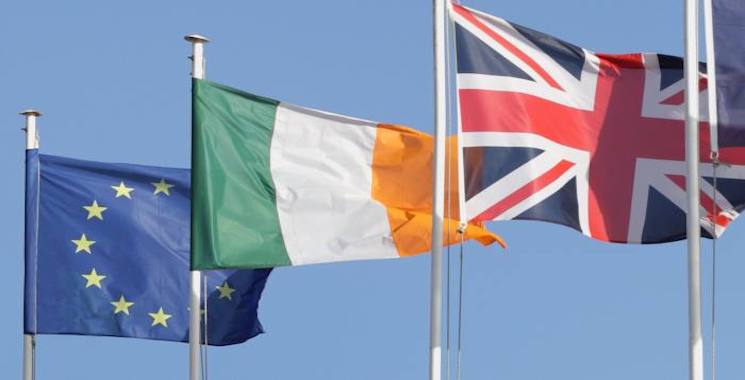 The UK Government is to publish a White Paper on the UK Internal Market. Although it is something of a new and fluid concept, the UK’s internal market could be said to legally exist because it is referred to in Article 6 of the Protocol on Ireland/Northern Ireland in the Withdrawal Agreement.

This is ironic because the revised NI/IRL Protocol puts considerable pressure on the very existence of a UK internal market.

Thus, as things currently stand, come the end of the transition period, NI will legally be applying EU laws in relation to goods and customs (and be de facto in the EU’s internal market for goods), but there is no equivalent clarity about the legal foundation for its place in the UK internal market.

Looking ahead: MLAs in Northern Ireland will also have a vote on the application of the areas of the Protocol which have the most direct impact on the UK’s internal market (Articles 5-10). The future of the UK internal market is a political as well as economic concern, and one that will have increasing impact as the consequences of UK-EU divergence take effect

The EU single market was in effect the basket that kept the four parts of the UK together across a wide range of policy areas (from agriculture to waste), even if they were implementing slightly different legislation under EU directives.

The EU single market had provided the glue for the UK’s internal market even as devolution became more established and led to increasing intra-UK distinctions. The question now is how much divergence can the UK manage? This is an economic/markets question, but also a political one.

The context is much wider than the issue of markets and trade. When it came to Brexit, Cabinet Office analysis in 2019 revealed there to be 160 policy areas in which the EU had competence to legislate; these rules were then enacted by the devolved institutions.

Many of these areas were not particularly contentious or heavyweight and could potentially be held together by common frameworks or principles, adhered to across the UK by the agreement of the devolved administrations (e.g. voting rights, water quality, maximum driver hours).

Some 78 policy areas were thought to be in need of common ways of working that could be achieved by a non-legislative common framework agreement (e.g. driver licensing, rail technical standards, biodiversity).

It was presumed that ‘consistent fixes to retained EU law’ in secondary legislation would be a way of creating ‘a unified body of UK law’. This was resisted by the devolved administrations, not least because of the difficulty in scrutinising such secondary legislation.

Regardless of what Westminster does, some of these policy areas are covered by the NI Protocol (e.g. waste management; manufacture, sale and presentation of tobacco; PPE; equal treatment directive), which means that NI will continue to align with EU law in these areas.

However, some other policy areas were seen as vital and in need of legislative frameworks to ensure commonality across the UK. There were 21 such areas that related to Northern Ireland, and 17 of these areas are now covered by the NI Protocol. These include, by way of example: 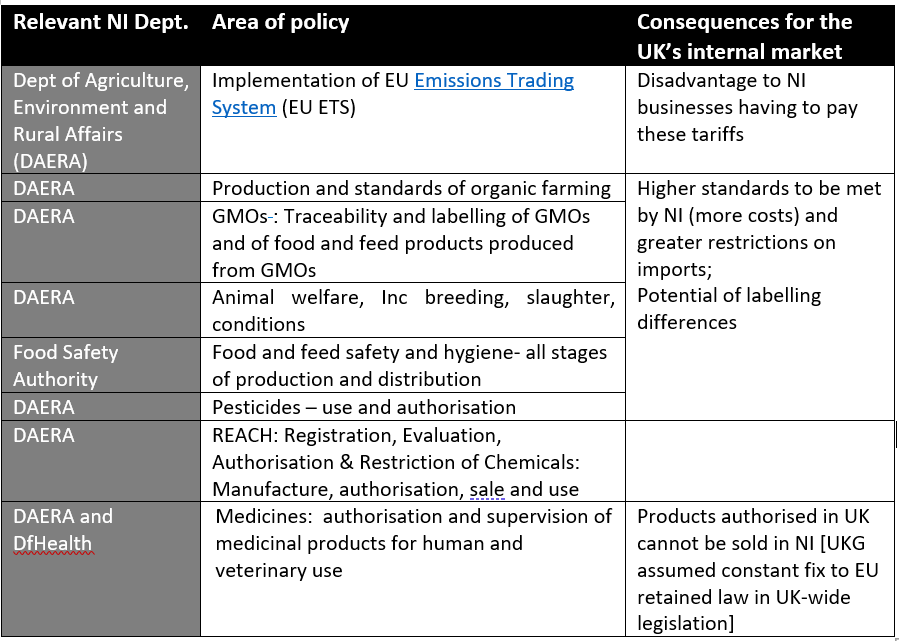 If the UK goes ahead and legislates in these areas it has to make a decision: is it willing to diverge from EU rules even though this will potentially alienate NI from the UK internal market? Boris Johnson’s speech to the DUP party conference in November 2018 described this ‘Hobson’s choice’ as he put it:

“If we wanted to do free trade deals, if we wanted to cut tariffs or vary our regulation then we would have to leave Northern Ireland behind as an economic semi-colony of the EU and we would be damaging the fabric of the Union with regulatory checks and even customs controls between GB and NI.”

Of course, at that point, he was referring to the previous version of the Protocol, known as the ‘backstop’. Ironically, the revised version of the Protocol that he negotiated and ratified increases the risk and likelihood of there being regulatory divergence between GB and NI, and thus barriers to trade east-west.

Worse still, a ‘no deal’ outcome at the end of the transition period will turn a choppy Irish Sea into a very stormy one indeed.

By Dr Katy Hayward, senior fellow of the UK in a Changing Europe and reader in Sociology at Queen’s University Belfast.