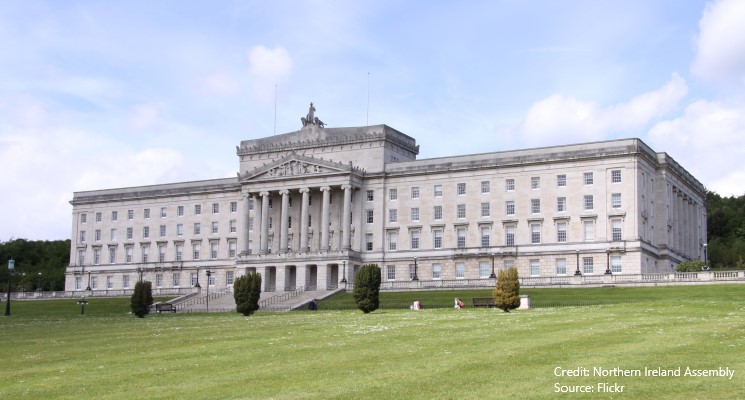 If Northern Ireland has been given hope this weekend, it is due, ultimately, to the courage of five individuals – the leaders of the political parties.

There is a tendency to view the bravery of political leaders in Northern Ireland purely in terms of managing their own parties, but the quality of resolve required of them by the New Decade, New Approach agreement should not be underestimated.

The document is a stark indication of the burning crises, persistent knotty problems and essential strategic initiatives that must be addressed urgently in this region. As such, it is unsurprising that its ambitions are expensive as well as expansive.

Yet it would remain naught but words were it not for the willingness of political parties to sign up to the challenge, which would intimidate the bravest and most experienced of stateswomen and statesmen.

Freshly reinstated First Minister Arlene Foster found the tone to match the mood of the Assembly she addressed on Saturday: “It’s time for Stormont to move forward and to show that together we are stronger for the benefit of everyone”.

The simple step of moving forward together at this particular moment in history is not only a symbolically important act, it is testimony of faith in the value of democratic governance itself.

Many had speculated that Stormont would not be restored until Brexit was resolved. Of course, there is no resolving Brexit, only realising and preparing for its implications.

And the New Decade, New Approach agreement marks the re-establishment of devolved government in time to provide a bare minimum of governance and representation for Northern Ireland when it comes to navigating the ramifications of Brexit.

Brexit means that Northern Ireland is located at the interface of the United Kingdom and European Union and not just in geographical terms.

As the UK receives its divorce decree absolute in the withdrawal agreement from the EU, there is a special provision for Northern Ireland in the protocol that enables it to remain partially in.

What this means in practice all depends on the negotiations to take place – at speed, complexity and secrecy – in the coming year.

Ministers and officials in London, Dublin and Stormont need to be aware that, far from being in a sitting-pretty, best of both worlds, scenario, the North risks being caught between a rock and a hard place when it comes to implementation of the protocol.

First, because it will remain, in effect, part of the EU’s single market for goods and also de facto part of the EU’s customs territory (regardless of being nominally in the UK’s), then movement of goods across the Irish Sea will be affected directly by negotiations that the UK and EU are about to begin.

This means potential friction within the UK internal market.

And, finally, it will suffer the negative effects of Brexit – restricted access to labour, especially unskilled EU workers for example, and friction in the movement of services across the island of Ireland.

Achievement of the open Irish Border for the movement of goods is no mean feat, but it in no way means that concerns for Northern Ireland are resolved.

Any adjustment for the North to make more of opportunities for the all-island economy can come only in a context in which the region is not first felled by friction with its largest market.

This is why – in an historic act of co-operation last week – all five political parties supported amendments to the withdrawal agreement Bill in the House of Commons that came on the back of cross-sectoral business demands from the region.

Having failed to gain government support, attention now moves to the House of Lords, where peers will make efforts to put protections for Northern Ireland into this first-base UK legislation.

The New Decade, New Approach document goes some way towards addressing the most fundamental concerns. The UK government commits legislating for unfettered access for the movement of goods from Northern Ireland into Britain by January 1st, 2021.

That the British government is unable to make any guarantee for the movement of goods crossing in the other direction – due to it being subject to international negotiation – is an indication of the acute insecurity facing businesses and consumers in Northern Ireland this year.

Recognition of the “potential for widespread and significant implications across all aspects of social and economic life” means that ensuring “the best possible outcome” from Brexit for Northern Ireland has been placed as the Executive’s most pressing priority.

What it can do to ensure this is, however, conceived here only in restricted terms. It will have a Brexit sub-committee, and it can have representation at selected UK-EU meetings dealing with the protocol.

For its part, the British government promises to “consult with”, “engage with”, and “examine funding options to support preparedness” in Northern Ireland for the completely transformed situation in which it sits. Again, naught but pleasant words until given form.

Arlene Foster, Michelle O’Neill, Naomi Long, Colum Eastwood, and Steve Aiken have brought their parties into government at a moment of profound uncertainty and historic consequence.

Their courage to govern needs to be matched by the British and Irish governments also sustaining a new approach for the challenges that this new decade brings for Northern Ireland.

By Dr Katy Hayward, senior fellow of The UK in a Changing Europe and reader in Sociology at Queen’s University Belfast. This piece was originally published by the Irish Times.