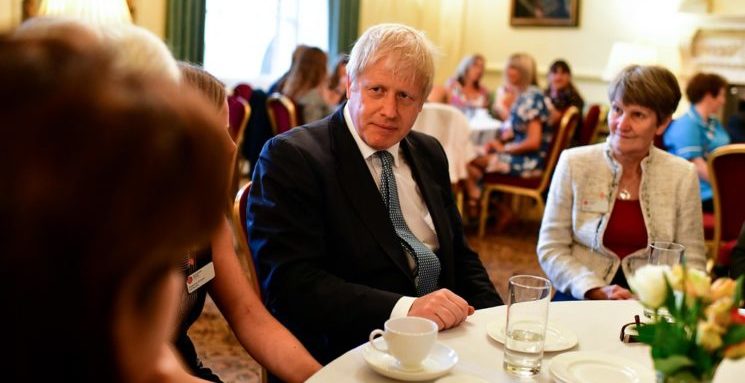 Purges during civil wars are not unknown events to the House of Commons.

On the 6 December 1648, new model army troops under the command of Thomas Pride, a Parliamentarian general, led the expulsion from the House of Commons of 45 members of the Long Parliament, and the exclusion of a further 186, who were thought not to be supporters of the Grandees of the new model army, and their objective of punishing Charles I.

In modern times, such purges may be associated with the left – conjuring up images of Stalinism or North Korea – but they have not been unknown to the Conservative Party: consider the sacking of seven cabinet ministers during the ‘Night of the Long Knives’ in 12-13 July 1962.

Purges are also not unknown to Johnson. On becoming leader, his reshuffle expelled no fewer than 17 ministers, resulting in a new model Cabinet. Of 33 ministers entitled to attend full cabinet, 19 had voted for him in the leadership election, and 15 had voted Leave – compared to only seven out of 29 Leavers in May’s final cabinet.

In a political world turned upside down by the government’s relentless and reckless ‘do or die’ pursuit of a Brexit First strategy, Johnson has shown little patience for internal dissent, be it from ministerial special advisers or backbench MPs.

At the weekend, it was reported that he had met with party whips at Chequers to agree that any Conservative MP who opposed a no deal Brexit would duly have the whip withdrawn and be prevented from standing for the Conservatives at the next general election.

Johnson has left no stone unturned to demonstrate his relentless ‘positive energy’ and his ‘do or die, come what may’ commitment to Brexit  – marking out a contrast to Theresa May’s absence of ‘positive energy’, her inaction ‘wrapped in defeatism’, the ‘morosity and gloom’ of her government, and its ultimate failure ‘to deliver on the will of the British people’.

This has created a One Notion Conservatism, the strategy being to hoover up the 12-14 per cent of voters currently supporting the Brexit Party. When added to the 31-33 per cent now supporting the Conservatives, this would likely deliver a substantial Conservative majority at the forthcoming general election.

From the outset of his tenure as Conservative Party leader and Prime Minister Johnson has been unequivocal in constructing a ‘People vs. Parliament’ populist political narrative, casting himself as the fearless deliverer of Brexit as the will of the British people, and Westminster as the bastion of treacherous Remainer MPs and the impediment to that objective.

This was never better illustrated than in yesterday’s Downing Street statement, where Johnson once more committed himself to delivering ‘the priorities of the British people’ and ‘the people’s agenda – fighting crime, improving the NHS, boosting schools, cutting the cost of living, and unlocking talent and opportunity across the entire United Kingdom’.

But Johnson knows that he cannot pass any legislation or implement his domestic agenda without a working majority at Westminster. Even before he once again sought to game the electorate with his protestations from outside No. 10, the motivation behind the charade had been exposed by the former Justice Secretary and Lord Chancellor David Gauke.

Similarly, Johnson’s mendacious claims that progress had been made on a deal with Brussels, and that ‘in the last few weeks the chance of a deal have been rising’, have been ridiculed by Philip Hammond as ‘nonsense’, because the government has not tabled or published any new proposals and does not even have a negotiating team.

For the new model Party, it is for this criticism – nay, treachery – that the Gaukeward Squad must be purged.

These are the naysayer MPs who have purportedly undermined Johnson’s negotiating position with the EU through their refusal to support or countenance a no deal Brexit, and their intention this week to vote ‘for yet another pointless delay’ .

An alternative political narrative might focus upon Johnson’s spectacular failure this far to outline concrete details of any of the ‘abundant solutions’ to the Irish backstop.

This alternative narrative has been given fresh impetus by the revelation in a leaked official document, dated the 28 August, which has stated in relation to the post-Brexit Irish border and potential British alternative solutions to the backstop:

‘It is evident that every facilitation has concerns and issues related to them. The complexity of combining them into something more systemic and as part of one package is a key missing factor at present’.

Lest it be forgotten, among the ‘Gaukeward Squad’ of dissenting MPs are David Gauke, Philip Hammond, Rory Stewart, David Lidington, Margot James, Sam Gyimah, Richard Harrington, Guto Bebb and Anne Milton, who until recently were Johnson’s ministerial colleagues in government. These treacherous parliamentarians are all fellow Conservatives, who have individually and collectively loyally supported and served their party for decades.

And in case we need reminding, Johnson leads a cabinet containing no fewer nine Conservative MPs, including himself, who have defied the whip during 2019.None of them have been purged for their respective dissension from the Conservative whip.

The one insuperable problem with ‘do or die’ strategies is that if you ‘do’, and pursue them, not only you may ‘die’, but there may much wider collateral damage to third parties. Johnson’s great political hero of the twentieth century is Winston Churchill, another politician familiar with high-risk strategizing.

In waging his own Battle of Brexit, Johnson may reassure himself that, in years ahead, historians will look back on this period as his own Churchillian finest hour.

But Johnson might do well to remember that Churchill, when First Lord of the Admiralty, launched the Dardanelles campaign in February 1915. This was based on a fundamental misreading and miscalculation of the strength and resolve of the opposing forces, and ended in a calamitous failure costing 205,000 Allied casualties, and more than 250,000 casualties among the troops of the Ottoman Empire.

Johnson’s fundamental misreading of the strength and resolve of the opposition within his own parliamentary party at home and the 27 EU member states abroad may yet result in his own political Dardanelles.

The casualties of that strategic failure will spread well beyond the ruins of Johnson’s new model party and its toxic One Notion Conservatism.

By Dr Simon Lee, senior lecturer in UK politics and government at the University of Hull.