One, two…and three? a closer look at the latest government defeats in the Commons 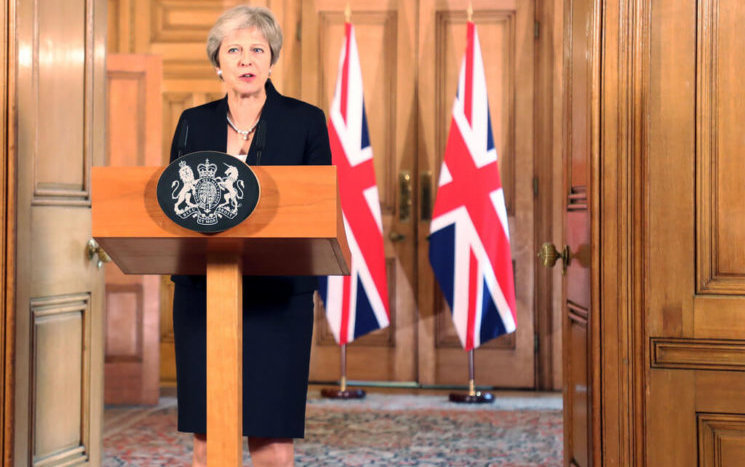 As the deadline of 29 March looms and the deal negotiated by the Prime Minister appears unlikely to be backed by a parliamentary majority in the impending ‘meaningful vote’, the prospect of a no-deal Brexit ‘by default’ has increased. Confronted with such a scenario, the Commons has seemingly become ready to embrace higher assertiveness over the endpoint of the process.

In early December, the potential for an inter-institutional tug-of-war was expressed by a motion to hold the government ‘in contempt’ over failure to disclose fully the cabinet’s legal advice on Brexit. The motion was passed by a majority of 19, as the DUP joined the opposition (in fact, on two separate divisions).

Last Tuesday, MPs supported by a majority of seven a cross-party amendment to the government’s Finance Bill, meant to limit its powers to modify indirect taxation after Brexit unless a) a deal is approved by the Commons, b) a no-deal Brexit is approved by the Commons, or c) the Article 50 process is extended (which arguably also covers the possibility of a second referendum).

One proponent, Yvette Cooper (Labour), described the amendment as a “parliamentary safeguard”. Another one, former cabinet minister Oliver Letwin (Conservative) went further, remarking that “[t]he majority tonight that is expressed in this House will sustain itself. We will not allow a no-deal exit to occur at the end of March.” He depicted the initiative as a template for further power-curtailing amendments to oncoming government-initiated legislation.

On Wednesday, the Commons passed by a majority of 11 a more impactful amendment devised by Dominic Grieve (Conservative), which technically amended the business motion put forth by the government to update the Brexit debate.

The EU (Withdrawal) Act had compelled the Prime Minister, in case of parliamentary rejection of the negotiated deal, to make a statement within 21 calendar days, and then to allow a vote within seven sitting days. The Grieve amendment now compels the government, in that event, to table a motion outlining a “Plan B” within three sitting days instead, i.e. by 21 January.

In a recent contribution for The Political Quarterly, Baldini et al. argue that the Brexit process in the two years after the referendum consolidated the Westminster traits of the British political system. Both the complexity of exiting the EU and the urgency of implementing Brexit placed the government in the driving seat and gave it an advantage over both Parliament and the devolved administrations.

For instance, it is telling that – notwithstanding the heated discussion on the role of Parliament in triggering Art. 50 – the dispute ended with a 133-word bill fast-tracked through Parliament, giving the Prime Minister the power to notify the EU of the intention of the UK to withdraw.

Another bitter battle centred on the ‘Henry VIII’ powers – enabling ministers to amend or repeal primary legislation – contained in the EU Withdrawal Bill. The amount of delegation is huge and, as shown by the Statutory Instrument Tracker, the time to scrutinise Brexit statutory instruments is now falling short. The scope for proper parliamentary scrutiny is, therefore, called into question.

Yet, in the run-up to the ‘meaningful vote’ tomorrow, some clear signs indicate that parliament may be willing to ‘take back control’. In this respect, the two consecutive defeats suffered last week by the government in the Commons prove especially revealing.

A first, crucial aspect is their timing. From the beginning of Theresa May’s premiership to December 2018, her government had suffered only two defeats on Brexit in the Commons (see Table 1).

Twelve Tory rebels were decisive in establishing the ‘meaningful vote’ in December 2017, while ten of the twelve (with two other MPs) secured an amendment on the Trade Bill in July 2018. In the last few weeks, three other government defeats were caused by Conservative rebellion (not counting the two defeats prompted by the DUP siding with the opposition). 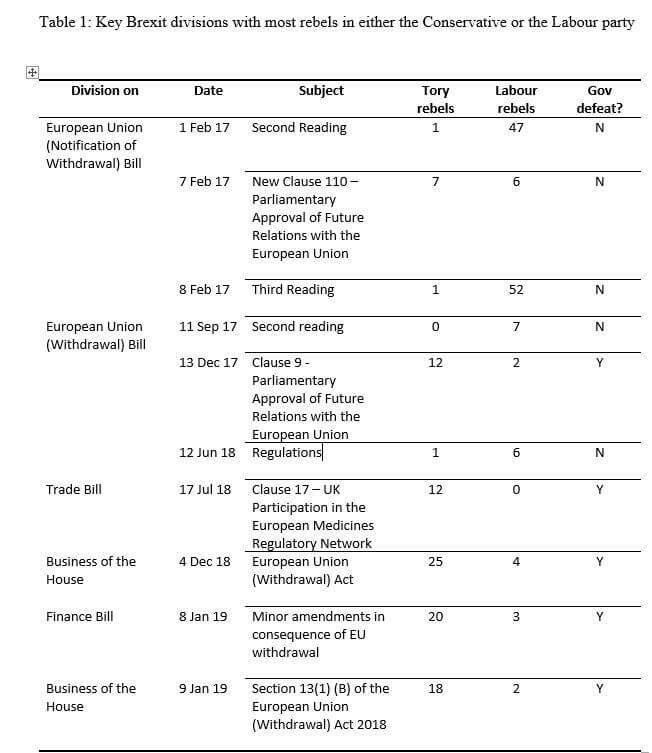 Opposition to no-deal has also made the contingent of Tory rebels wider and more cohesive. The Tory majority government suffered at most seven defections, whereas no more than twelve rebels challenged May’s minority government until December.

In the last three defeats, instead, the rebel ranks counted between 18 and 25 MPs. Nine of them have been a thorn in the Prime Minister’s side since the first rebellion; five others have defied the whip in all votes; nine MPs opposed the government twice.

Government defeats require a united opposition. Labour’s Brexit strategy may still be ambiguous, but the opposition has faced very limited rebellion when voting against no-deal. The comparison with the Notification of Withdrawal Bill is striking.

There, an extraordinary rebellion of more than 50 MPs at third reading – on the Remain side – called into question the leadership of Jeremy Corbyn. In the latest divisions on Brexit, the small contingent of pro-Brexit Labour MPs only gave marginal support to the government.

Finally, the latest amendments defeating the government were tabled by a cross-party alliance of MPs. Such cross-party cooperation could ensure that parliament plays a stronger role in the design of Brexit.

Following another ‘Grieve amendment’ passed by the Commons in December, if the negotiated deal is voted down, the subsequent motion put forward by the government will be amendable. The Commons would then have a chance to signal their preferred outcomes.

Certainly, Parliament has been brought back in the game, at the most critical moment for Brexit, by the lack of a Conservative majority and the deep differences of opinion within the Tory party.

In such a situation, the Speaker’s role in giving rulings and selecting amendments shall remain central and spark controversy no less than it did on Wednesday, when his procedural decision to accept the Grieve amendment caused his judgment and impartiality to be questioned.

Anyway, whatever happens with the meaningful vote, the relationship between government and parliament is likely to remain conflictual and fluid, and any assessment on the constitutional nature of their relationship frustratingly provisional.