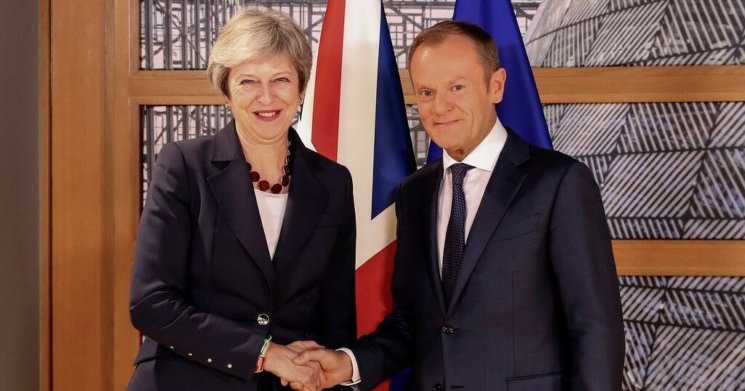 In the strange world of Brexit, Theresa May might have taken some comfort from the European Council last week, despite no progress being made. Unlike the Salzburg meeting last month, there were no harsh words and bitter briefings; possible options for addressing the remaining problems in the negotiations weren’t shot down by the EU.

And yet, May returns to the UK with ever more criticism from her own side ringing in her ears.

This is one of the paradoxes of May’s situation: the more she keeps one group happy (or at least not too unhappy), the less she keeps the others so. In the simplest of terms, if she’s trying to give “them” something, she must be taking it from “us.”

We might note here that there is a basic flaw in this analysis, namely that “we” – especially on the UK side – largely don’t know what “we” want.

And this is the problem facing the Conservative party right now.

On the one hand, many MPs know that they don’t like what is going on with Brexit. They see an EU that appears to be inflexible and domineering, and a prime minister who looks short on leadership and determination and who seems to be giving ever more ground to European demands.

The potential extension of the transition period – in which the UK would follow all EU rules and continue paying into the EU budget, but without having a vote any more – discussed in Brussels is a case in point: we’d be leaving the EU in name only, postponing the day we can be finally rid of the constraints that we’ve suffered under, these MPs argue.

But on the other hand, these same MPs appear to be unwilling to pursue their views to the logical conclusion of trying to remove May for someone more amenable to their worldview.

This has been the most striking aspect of the Conservative tensions to date: a lot of angry words, but very limited action to give them practical effect. Indeed, apart from blocking some amendments to related pieces of legislation and some resignations from Cabinet, it is hard to pin down any other example of where MPs have gone beyond what they say.

The weakening explanation has been that words would be enough. Certainly, the range and depth of criticism of May’s policy, especially since the settling on the Chequers plan during this summer, has been very substantial: not only do critics appear from every quarter (including from the EU too), but even those who support May appear to be unwilling to go out to defend it actively. At times, it appears that only May herself thinks what she is doing is the best course of action.

Seen in that light, it’s not been unreasonable to think that eventually, May must accept that she has to change her mind, since she cannot rely on a majority in Parliament to carry things through.

And yet, that is precisely what May has failed to do, defending Chequers at every turn and resisting every attempt to change her mind. The strength of this resistance, coupled with the passing of time, has meant that less and less do her internal opponents speak in the hope of success.

What has replaced that is a second dynamic, namely that of the scapegoat.

This is perhaps best explained by considering what happens if critics were able to try and get rid of Theresa May from Number 10.

Firstly, there is the question of whether enough MPs would vote against her to succeed in kicking her out, something that is very uncertain. To fail at this stage would definitively remove any power to influence policy, on Brexit or anything else.

Secondly, it’s not clear who would replace May if she stood down. Just about the only certainty is that MPs would fail to select a single replacement, meaning that the party membership would get to choose from the final two candidates, and those members wouldn’t necessarily choose someone that MPs clearly wanted.

Thirdly, even if a “better” replacement was put in the post, they would then face the same situation that May does now: trying to find a deal and under huge pressure to make concessions to reach that deal. In short, the critics would now own the problem.

With all this in mind, it looks as if May’s opponents have decided that it’s best to let her continue, to reach a deal with the EU so the UK does leave next March, and only then to move to replace her, just at the point that the next set of negotiations on the future relationship begin. All the while they can pile on the blame for whatever the current deal is, setting down markers for their future challenges.

If this appears as a cynical take, then consider that if critics genuinely did want to replace May, then they could have done so much easier in the immediate wake of last year’s general election. Given the timeline of Article 50 negotiations, the longer May stays in post, the lower the chance that she will be removed by her own party, if only because there will be less time to turn those negotiations on to a new course.

So expect many more unhappy words about May’s choices, but not much action.

By Dr Simon Usherwood, Deputy Director of The UK in a Changing Europe. This piece was originally on Chinese Global Television Network.