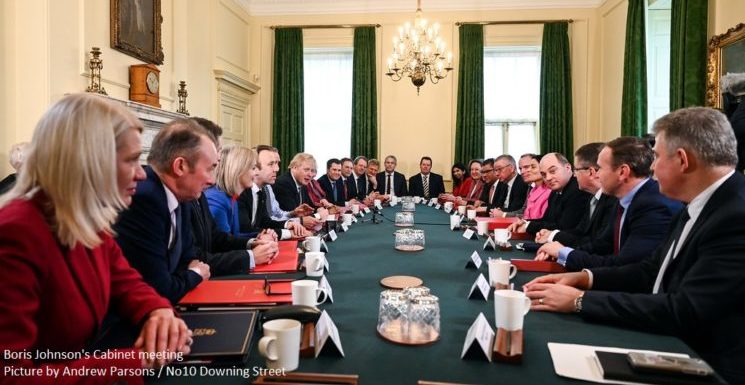 Boris Johnson’s reshuffle supposedly moves his cabinet out of Brexit mode and into preparing the UK for its role in the world after EU membership. One obvious difficulty with this is that not only must his administration work out the UK’s future relationship with the EU, it must simultaneously implement important sections of the Withdrawal Agreement. Far from being oven ready, the key ingredients of his Brexit deal are yet to be prepped.

Johnson has revelled in his image as a deal maker – the person who could get a Brexit deal over the line. His challenge, however, was not to do a deal with the EU, it was to improve upon Theresa May’s deal. Her attempt at reaching a Withdrawal Agreement rested on an insurance policy – the Northern Ireland Backstop – whereas Johnson’s deal rests on a sleight of hand.

Northern Ireland’s economy therefore finds itself in the middle of an uncomfortable Venn Diagram, a space in which the rules of the UK’s internal market and the EU’s single market will overlap once the transition period ends. And the relationship between these two markets in Northern Ireland is only sketched in the broadest terms in the Withdrawal Agreement.

The key institution becomes the Withdrawal Agreement’s Joint Committee, a body which has yet to be established, but which will be made up of representatives of the UK and the EU.

It was envisaged that it would become the primary means by which the Withdrawal Agreement was kept under review, troubleshooting disputes between the UK and the EU. Under Johnson’s reworking of the Agreement, however, it has been given the much more urgent task of fleshing out the terms of the Protocol on Ireland/Northern Ireland.

Under Johnson’s deal, the UK as a whole is not held in a customs union with the EU. It is free to diverge in terms of tariffs and regulatory standards from the EU, and to conclude trade deals with other countries. As a result, there is a risk of some goods which do not comply with the EU’s requirements entering the EU’s single market through Northern Ireland after the transition.

Under Article 5 of the Protocol, the task of laying down the rules for determining whether goods coming from Great Britain into Northern Ireland are ‘at risk’ of entering the EU’s single market falls to the Joint Committee.

This is not a task which the UK’s representatives on the Committee can prevaricate over; if no rules are put in place this provision operates on the basis that goods are generally classified as being ‘at risk’ and thus subject to checks and tariffs.

The UK must also develop the rules by which it will reimburse or waive duties when a business is able to demonstrate that the ultimate destination of goods from Great Britain is Northern Ireland (and not the EU, including Ireland).

Potentially this will mean a high reliance on rebates rather than waivers. And the more the system relies on rebates, the higher the upfront costs which small and medium sized enterprises might find hard to bear.

At first glance, that commitment might appear comprehensive. It might even appear to override the application of the EU’s Customs Code requirement of exit declarations (which under Article 5 would appear to be necessary when goods leave Northern Ireland).

The issue is whether the imposition of that formal check raises up to the level of a fetter to market access, especially when the movement of goods into and out of the single market needs to be checked to preserve its integrity.

For now, there is no certainty on how the UK and EU will resolve this tension between the Protocol’s terms, and it is easy to see where paperwork could creep into the process of moving goods from Northern Ireland to Great Britain.

Some of these issues will be negated if the UK and the EU conclude a comprehensive Future Relationship Agreement based around zero tariffs and zero quotas (preventing the need to manage these at Northern Ireland’s entry ports).

But unless the UK intends to align with the EU in terms of product standards after Brexit then checks on trade flows from Great Britain into Northern Ireland will be necessary.

The potential for a trade deal which magics away the problems of the Protocol must nonetheless seem tantalising for the UK government. The major difficulty is the time frame. The UK has committed itself to implementing the Protocol as the trade negotiations are ongoing. Both must be concluded in a matter of months, or Brexit’s transition period extended.

In other words, the UK has fallen into another Brexit sequencing trap. It cannot sit on its hands and hope that these problems are resolved by the Future Relationship Agreement, because Article 12 of the Protocol gives the EU Commission full enforcement powers and recourse to the Court of Justice if the UK does not fulfil its obligations regarding rules governing Northern Ireland’s market by the end of the transition.

The logic of the Protocol simultaneously restricts the UK’s room for manoeuvre in trade talks; the UK will be confronted by the choice between close alignment with the EU or disruption in trade flows between Great Britain and Northern Ireland.

The centre point of the Protocol’s Venn diagram could thus end up feeling much more like an assault from all sides rather than the best of both worlds. Fundamental aspects of Northern Ireland’s relationship with the UK’s internal market remain unresolved.

There is precious little time for rules to be developed and implemented under the Protocol and for the UK-EU Future Relationship Agreement to be negotiated.

And this is to say nothing of the Protocol’s complex provisions on non-diminution of rights, state aid and the Stormont consent mechanism. Brexit is far from done, and Northern Ireland could well continue to frustrate Boris Johnson’s plans.

By Colin Murray, Reader in Public Law at Newcastle University. He is the Principal Investigator for the ESRC Governance after Brexit Performing Identities project.