Parliament, spin and the accurate reporting of Brexit 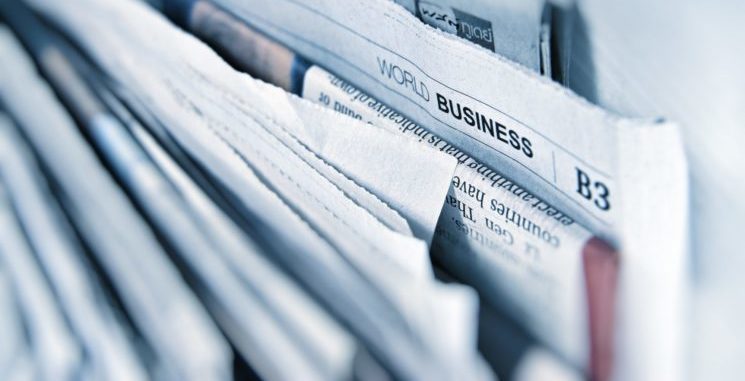 Parliamentary reporting has rarely been more exciting or important. From the ‘meaningful votes’ on Theresa May’s Brexit deal to the first Saturday sitting since 1982, parliament has been the site of ever-more suspenseful Brexit episodes.

These have been narrated and analysed by reporters in real time – and followed by record audiences.

Recent weeks have seen a growing chorus of concern about the relationship between the Johnson government and the media, with the perceived misuse of anonymous briefing and spin coming under pointed criticism from senior journalists and former Conservative MPs.

In this environment, parliamentary battles and controversies pose particular challenges for journalists.

The more politics is played out in parliament, rather than around the cabinet table or in TV studios, the more important an understanding of parliamentary procedure becomes.

Raw politics of course is important in driving parliamentary outcomes. But parliamentary procedure sets the framework within which political questions are negotiated and resolved.

It can determine which actors will have most influence and when.

Hence if journalists misunderstand procedure, or are deliberately misled, they risk misrepresenting which political outcomes are likely to happen, and indeed which are even possible.

This risk has been realised in three key Brexit events over recent days: Oliver Letwin’s amendment to Saturday’s motion; the government’s response to that amendment; and Monday’s attempted repeat of the meaningful vote.

In all three cases, understanding of parliament and its workings is key to understanding what really happened, its significance, and its consequences.

The passage of Oliver Letwin’s amendment to the government’s first motion was the decisive moment on Saturday.

By withholding parliamentary approval for the Withdrawal Agreement and Political Declaration until the implementing legislation had been passed, it denied Boris Johnson a ‘meaningful vote’ on his newly-negotiated deal, ensuring that the terms of the Benn Act still applied, and hence forcing him to seek an extension to Article 50.

But the Letwin amendment drew little attention when it was published on Thursday night.

Parliamentary experts, including at the Constitution Unit and the Institute for Government (IfG), pointed out its potential importance from early on Friday morning, but this view did not immediately gain traction.

Instead, throughout most of Friday the media flurry of vote-counting and speculation about the outcome of a yes/no vote on the deal that began on Thursday continued.

But in fact the more important question, once Letwin’s amendment had been published, was whether the meaningful vote would actually take place – and how many MPs would vote for delay.

Journalists turned to this only late in the day – with the BBC’s Mark D’Arcy and Sky’s Sam Coates among the first to discuss its significance – and more widespread stories spread by the evening.

This rendered the earlier speculation largely a waste of time. 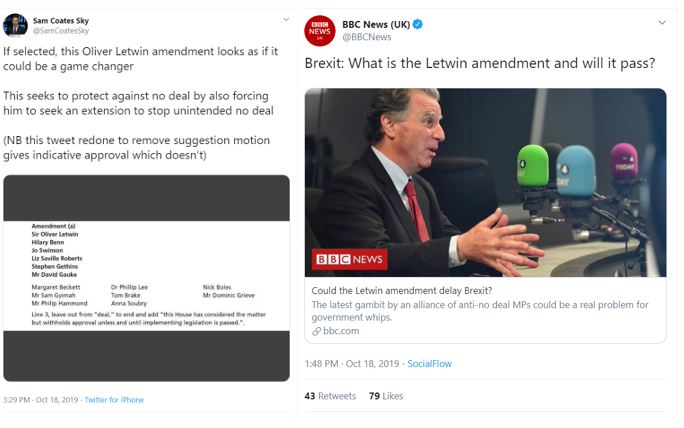 Stories on the potential significance of the Letwin amendment quickly gave way to reports that the government would pull Saturday’s vote on the deal if the amendment were to pass.

As before, experts – including from the House of Commons Library, the Hansard Society and the Bingham Centre for the Rule of Law – were quick to point this out, but the story nonetheless kept running through much of the day.

The first procedural misunderstanding was that the amendment could not be voted upon unless the motion had been moved, and once moved a motion belongs to the House.

Put more simply, once a motion has been moved in parliament (by the government or anyone else) it cannot be withdrawn, no matter how parliament decides to amend it.

Second, it requires only very basic procedural knowledge to understand that the passage of the Letwin amendment meant a vote on the deal was no longer possible.

The amendment signalled that MPs would only accept the government’s motion if it was reworded (to require the implementing legislation to be passed before approval of the deal).

This having happened, there was hence no vote on the deal left for ministers to ‘pull’.

Again, despite expert sources having sought to correct these errors first thing in the morning, the misleading Downing Street briefing was widely reported, for example continuously appearing on the BBC news ticker throughout the debate.

Almost immediately after the amended motion was passed, Leader of the House Jacob Rees-Mogg announced to the Commons that the government would seek to hold a new meaningful vote on Monday (controversially doing so on a ‘point of order’, meaning that he could not be questioned by MPs).

This left Speaker Bercow fending off a flurry of questions about the government’s plans.

From these exchanges it was already fairly obvious that attempting to repeat the vote would engage the same procedural convention of which Theresa May fell foul in March: that parliament cannot be asked to vote a second time for the same motion.

MPs had just made a clear decision to withhold approval of Johnson’s deal until the accompanying implementation legislation had been passed, so an additional vote would be explicitly asking them to overturn that decision.

Journalists watching the proceedings would have known this, and it was quickly pointed out by experts, again for example from the Hansard Society.

There were subsequently firm predictions from both the IfG and the Constitution Unit that the Speaker would rule the government’s attempts out of order.

In procedural terms it stretches credulity to believe that the government was unaware of the risks of tabling the deal again.

The fact that it did so suggested instead that Downing Street sought a clash with the Speaker which could be framed as a collision between the ‘will of the people’ and an obstructive parliament.

Sure enough, Bercow ruled on Monday that the motion could not be brought, and precisely this framing was adopted by the Prime Minister’s official spokesman and subsequently adopted in many places.

The truth, as those familiar with parliamentary procedure immediately recognised, was that the Speaker was essentially compelled by the rules to act as he did.

Government, parliament and the media

These three examples demonstrate the importance of a proper understanding of parliamentary procedure in order to accurately predict and report what is happening in parliament, and in order to establish how credible executive sabre-rattling might be.

Instead, journalists’ lack of procedural knowledge allowed misleading reports or framing of the situation to spread – fed by statements from ministers or ‘Downing Street sources’.

Problematically, such briefings have been increasingly used to promote a ‘parliament versus people’ narrative (which began under Theresa May) that deliberately seeks to ramp up public dissatisfaction with parliament and MPs.

Spin is, of course, nothing new.

Governments have always framed their messages carefully, emphasising the most attractive points of a policy or giving optimistic projections.

But the examples above go beyond this, to present factually incorrect and misleading accounts.

It has become commonplace to reflect that our political and constitutional norms have broken down over the past three years.

This has been especially evident in the relationship between government and parliament.

The examples above suggest a similar breakdown in the normal rules of engagement between the government and the media.

Put simply, reporters can no longer trust in government briefing of future parliamentary events to be fair or accurate.

This cannot be a completely new problem, but its scale and significance does appear to be novel.

There are many possible explanations, including the particular personalities at the heart of Downing Street and the broader pressures of minority government – where ministers cannot so readily rely on parliamentary assent to their policies.

A combination of unreliable briefings and limited procedural knowledge hence risks drawing journalists unwittingly into spreading misleading information – and feeding a damagingly populist narrative which pits parliament against the people.

Clearly some journalists, including notable cases cited above, are well versed in parliamentary procedure.

There are clear examples of reliable and high-quality reporting on key parliamentary events.

It would be unreasonable to expect all journalists to become procedural experts given the complexity of parliamentary rules, but those who are less familiar with the detail have sources to which they can turn.

As should be clear from the accounts above, there are a range of experts who provide reliable non-political briefings about parliamentary practice on social media in real-time, and who are willing to engage with journalists directly.

Most obviously, specialists in the House of Commons Library produce detailed procedural and policy guides – while the Commons Press Office actively solicits inquiries for any journalists seeking advice on procedure, including during key parliamentary events such as Saturday’s sitting:

High-quality journalism is fundamental to a thriving democracy, and with parliament the key battleground between competing visions and versions of Brexit, political and parliamentary reporting has rarely been more important.

Journalists are not themselves to blame for misleading briefings about parliamentary procedure, and much of the fault lies elsewhere.

But checking the facts can be critical to the substantive accuracy of a story or a tweet.

The neutral, specialist resources available, not least from parliament itself, could be crucial to the media properly fulfilling its vital democratic role.