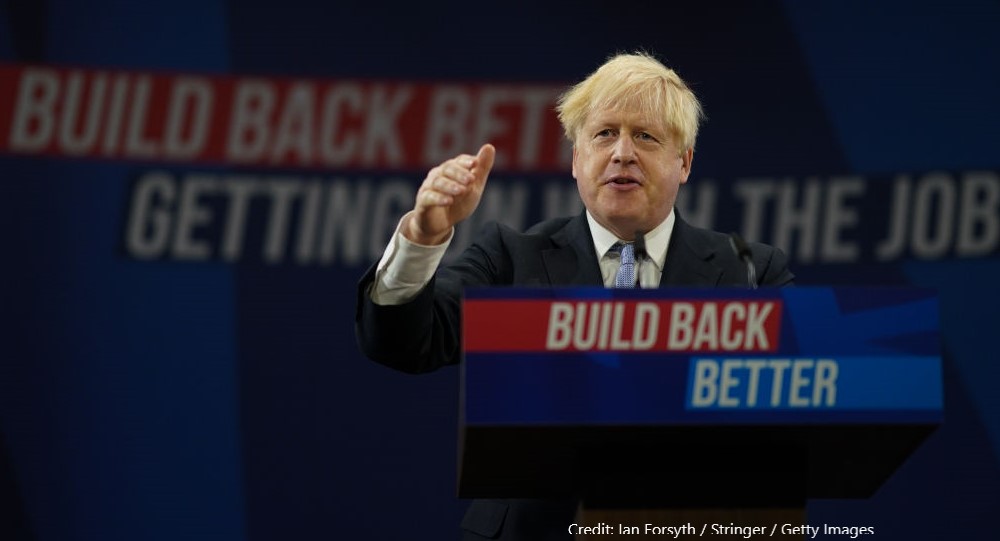 After whipping his troops to support Johnson’s better than nothing Brexit deal, and then taking a vow of silence as a repenting second referendum supporter, the supply chain crisis finally provoked Starmer into a new Brexit promise.

Labour would not reverse Brexit – but it would ‘Make Brexit Work’.

What Starmer did not do was put any flesh on how a Labour government would make Brexit work. His only memorable Brexit pledge was to urge the government to offer 100,000 visas to lorry drivers.

Nor did his Shadow Chancellor, Rachel Reeves: she cited a litany of current economic woes and laid them at the door of the government’s Brexit deal and its handling of the pandemic.

But she said nothing about what a future Labour government might do to fix the deal, and one of her policies – a commitment to buying British – would be more protectionist than even the current Trade and Cooperation Agreement, where the government effectively signed up to EU procurement rules.

That said, there are clear areas where Labour might look to improve the Johnson deal. They would start with a mobility agreement, which the EU offered but which the government would not accept.

The Conservatives would doubtless paint that as reintroducing freedom of movement, but attitudes to immigration seem to be shifting and by the time of the next election the services sector will have experienced the full impact of restrictions as business travel resumes.

Next on the list will be some sort of agreement on sanitary and phytosanitary rules, which the EU will probably insist means the UK coming back into line with EU rules (and an oversight role for the European Court of Justice as well).

That is currently the EU’s preferred route to make the Northern Ireland protocol less burdensome, and would ease export problems for GB farmers and seafood producers.

Then Labour could move on to the softer stuff, on foreign policy cooperation and reapplying to the Erasmus student exchange scheme for example.

Meanwhile in Manchester at the Tory Party conference, one of the later party conferences, there was more Brexit about too. The new Foreign Secretary may not want the EU or Europe on the list of potential allies that Global Britain would seek to partner with, but the Chancellor finally broke his Brexit silence too.

In his March 2021 Budget speech, he only referred to Brexit once – as an enabler of his flagship policy idea of freeports. (Of course it was not true that the UK could not have freeports while an EU member – a previous Conservative government had dismantled those the UK did have).

Over his 18 month tenure, and despite being a prominent Brexit supporter, he had never made a major speech about Brexit in party conferences or elsewhere.

In his conference speech this year we heard a bit more.

He had been an early supporter despite being warned of the potential damage to his political prospects. He admitted his debt to his California experience (something his officials confirm).

His dream is not of ‘Singapore on Thames’ but ‘San Francisco on Tees’ or ‘Silicon Valley on Tyne’ and it was that future that Brexit offered: ‘.. in the long term, I believed the agility, flexibility and freedom provided by Brexit would be more valuable in a 21st century global economy than just proximity to a market. That in the long term a renewed culture of enterprise willingness to take risks and be imaginative would inspire changes in the way we do things at home. Brexit was never just about the things we couldn’t do. It was also about the things we didn’t do.’

In the next section he went on to talk about his corporation tax superdeduction – without being clear which bucket he put it in.

But it was left to Brexit negotiator turned Cabinet minister Lord Frost to fill in more detail – albeit to a rather smaller audience.

While the big news (of sorts) was his sabre-rattling over the Northern Ireland protocol and his threat to use Article 16 if the EU failed to respond adequately to the government’s demands for a rewrite, he also laid out his early list of Brexit opportunities.

The areas singled out for regulatory divergence sounded very similar to those identified in the review conducted for the government by Iain Duncan Smith, Theresa Villiers and George Freeman (and then repeated by the Prime Minister – with the addition of allowing the government to see off the threat of the European football super league).

To that he added the new agriculture support scheme for England (which will be genuinely ground-breaking, when it gets off the ground), the new migration regime (already making its impact on the labour market clear as the safety valve of free movement remains firmly closed).

And it was the labour market debate at the conference which showed how the Brexit debate was beginning to play out. The Conservatives were determined not to be cowed by business cries of anguish at labour shortages – and were equally determined to draw a contrast with Keir Starmer’s proposal to issue 100,000 visas for lorry drivers.

So they unveiled a new economic model, where labour shortages were simply the necessary and probably even desirable growing pains en route to a new economic model of high wages and high productivity, rather than a short cut to inflation and stock outs.

The Prime Minister presented controlling immigration as the way to stop business using ‘immigration as an excuse for failure to invest in people, in skills and in the equipment the facilities the machinery they need to do their jobs’.

So over the coming months, we may see an opposition party a bit more willing to call out the flaws in the government’s Brexit deal, and start to suggest ways of reducing disruption; and a government intent on doubling down on the benefits of its Brexit deal – labelling everything a Brexit dividend and a desirable (and planned) step on the path to a better future.

We’ll watch and wait to see what next year’s party conferences bring to the table.