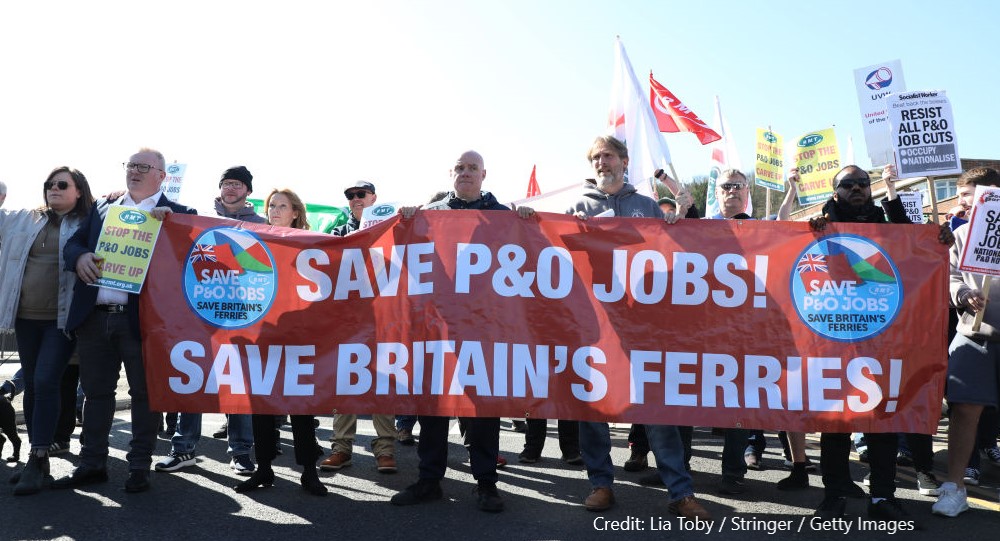 When P&O Ferries decided to sack 800 (786 to be precise) workers, in the case of some by Zoom, there was a justifiable outcry and questions about breaches of employment law. This is no way to treat staff, especially not those who worked through the pandemic, and in this febrile post-Brexit world, some on the Remain side saw this behaviour as a consequence of Brexit.

In fact, the UK has not taken advantage of its post Brexit-freedom to depart from EU-derived employment law. That law was carried over into UK law as retained EU law and has not been amended.

The reality is that UK employment law on dismissal was and still is flexible: it is easier in the UK to fire employees than elsewhere in Europe, and that’s what P&O Ferries seems to have done. To use a contract lawyer’s term, they’ve made an ‘efficient breach’.

We’ll begin with the two exam questions. First, does UK law apply to the dismissals? When it comes to P&O Ferries, UK employment law will apply, irrespective of what law governs the contracts, as ‘mandatory rules’ (and P&O does not appear to deny this). UK law will apply to the P&O staff provided that those sacked come within the territorial scope of UK law (that is they ordinarily work in Great Britain).

Second, has P&O Ferries breached employment law? There’s a fog of uncertainty around the precise facts but the following is likely to apply.

For those employees with two years plus service:

All employees – with or without two years’ service – will have a claim for wrongful dismissal too (that is, dismissal without notice). Their compensation will be the pay for their notice period, often a month’s notice (so around £2,400 for Ben).

It is theoretically possible to seek an injunction restraining P&O from breaching UK employment law but injunctions are rarely granted.

All of this is long standing UK domestic law, and has nothing to do with the EU. All member states of the EU have laws regulating dismissal; they are not harmonised at EU level.

The one bit of law which does come from the EU – and is now ‘retained EU law’ in the UK – concerns collective redundancies (20 or more redundancies, within a period of 90 days or less, at one establishment).

When an employer is proposing to make collective redundancies the employer must consult with trade unions or elected worker representatives in ‘good time’ and ‘in any event at least 45 days … before the first of the dismissals takes effect’ where more than 100 employees at one establishment are dismissed (or 30 days if fewer).

So employees are entitled to a protective award of up to 90 days’ pay (so around £7,700 for Ben). Trade unions can apply for the award on their behalf. Unlike in other EU countries, it is not possible to get an injunction to restrain a breach of the collective redundancies legislation.

P&O denies it has committed any criminal offence because it notified ‘the competent authority of the state where the vessel is registered’ (Bermuda, Bahamas, Cyprus); it didn’t need to notify the UK government. This is due to an amendment to UK legislation introduced as a result of an amendment to a 2015 EU law concerning seafarers.

P&O Ferries has admitted that ‘We know that for our people this redundancy came without warning or prior consultation’. They also appear to be willing to pay up: ‘We have offered enhanced severance terms to those affected to properly and promptly compensate them’.

So, on a rough calculation Ben might be able to receive about £23,600 from P&O Ferries. If multiplied by 800 workers that will cost the company about £19 million; P&O says its compensation scheme will cost £36.5m, with no one receiving less than £15,000. If P&O’s losses are £100 million, paying the employees off in this way may represent an ‘efficient breach’. It’s a cost saving way of addressing an ongoing financial loss, albeit one which has ruined the livelihoods of many staff and ‘caused distress for them and their families’.

And the purported employment of Indian workers on $2.38 an hour in place of the sacked crew? If they are deemed to be ordinarily working in the United Kingdom they will be subject to UK minimum wage laws. This hourly rate clearly does not meet that level, so there may well be trouble looming for P&O on this front.

So is UK law on dismissal more flexible than those laws across Europe? In a word, yes. The OECD ranks all countries in order of ‘strictness of employment protection – individual and collective dismissals (regular contracts)’. The OECD average is 2.06. The US is the most flexible at 0.09, with Canada next at 0.59. Ireland is fifth at 1.23; the UK sixth at 1.35. France and Germany come in at 35th and 36th with figures of 2.56 and 2.60 respectively.

So it is easier to dismiss workers in the UK, as the staff at P&O have found out – but this has nothing to do with Brexit.

By Catherine Barnard, Deputy Director at UK in a Changing Europe and Professor of European Union Law and Employment Law at the University of Cambridge.