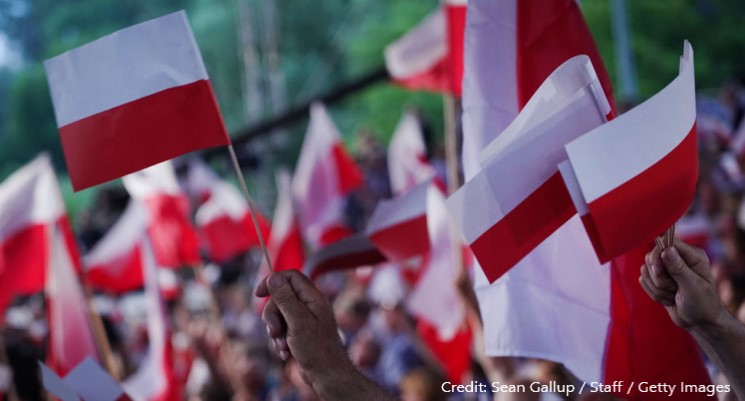 Poland’s 12 July presidential election run-off is of crucial importance and will determine the shape of the political scene until the next parliamentary poll, scheduled for autumn 2023.

A victory for incumbent Andrzej Duda – who is supported by the right-wing Law and Justice (PiS) grouping, the ruling party since autumn 2015 – would give the government a three-year run without any national elections to continue implementing its radical state reconstruction programme.

However, the ruling party lacks the three-fifths legislative majority required to overturn a presidential veto.

A victory for Mr Duda’s challenger – Warsaw mayor Rafał Trzaskowski who is backed by the liberal-centrist Civic Platform (PO), Poland’s governing party between 2007-15 and currently the main opposition grouping – would thus be a disaster for Law and Justice, seriously hampering its ability to govern effectively and possibly precipitating an early parliamentary election.

Last autumn’s parliamentary election – when Law and Justice retained its overall majority but lost control of the Senate, Poland’s less powerful second chamber – showed how evenly balanced support for the government and opposition was, with many voters determined to use any opportunity to block the ruling party.

Although polls suggested that Mr Duda would easily win the first round of voting with around 40-45% of the vote, the second round run-off was always expected to be extremely closely fought and unpredictable.

The opposition’s strategy was to turn the presidential election into a plebiscite on the government by tying Mr Duda as closely as they could to the ruling party.

The danger for Mr Duda was that a key group of voters who were positively inclined towards him personally but did not necessarily support Law and Justice would use the election to express their hostility towards the government.

However, in March the coronavirus pandemic crisis changed the dynamics of the presidential campaign and initially Law and Justice benefited from a ‘rally effect’: the inevitable psychological tendency for worried citizens to unite around their political leaders and state institutions as embodiments of national unity at times of a sudden and dramatic external threat.

This strengthened Mr Duda and polls started to show that he could win a clear victory in the first round. In the event, the May election never took place because legislation proposed by Law and Justice that would have introduced universal postal voting to allay public safety concerns was not approved in time, due to a split within the governing camp.

Subsequently, the Polish parliament agreed a new electoral law that allowed Poles to either vote traditionally in polling stations (which would have to adhere to sanitary standards) or cast postal ballots (which very few chose to), and the first round was re-scheduled for 28 June.

The fact that Mr Duda’s electoral strategy was premised on there being a May poll meant that when the election was postponed he needed to re-invigorate his campaign.

Moreover, as the ‘rally effect’ waned the election dynamics once again changed with the economic slowdown arising from the pandemic putting pressure on the state budget and making it difficult for Mr Duda to offer any substantial new social spending and welfare pledges.

This forced him to recalibrate his campaign message to claim that Law and Justice was the party best placed to oversee recovery while protecting families and low income households.

Mr Duda also argued that only his re-election offered governing stability at a time of ongoing epidemiological and economic crisis, saying that the opposition would simply use the presidency to undermine the government and sabotage its policies.

Mr Trzaskowski is a much more formidable campaigner and made an energetic start, quickly regaining the mantle of main opposition challenger and putting Mr Duda on the back foot.

Although much of his initial polling surge came from core Civic Platform voters who were planning to abstain or vote for another opposition candidate returning to the fold, it gave his campaign a sense of momentum.

However, Mr Trzaskowski’s credibility among well-educated metropolitan voters, which helped him to quickly re-build Civic Platform’s support, also gave Law and Justice an opportunity to portray him as embodying the urban liberal elites that looked down upon culturally conservative small-town provincial Poland.

For example, as part of an effort to both consolidate and mobilise Law and Justice’s core traditionalist electorate and highlight the fact that Mr Trzaskowski was distinctly more liberal on moral-cultural issues than the average Pole, Mr Duda introduced a ‘family charter’ that included pledges to not allow same-sex couples to marry or adopt children and ban propagation of what Law and Justice termed ‘LGBT ideology’ in schools and public institutions.

Last year, in one of his first high profile policy initiatives as mayor, Mr Trzaskowski signed a declaration which included a proposal to introduce a comprehensive, LGBT-approved sex and anti-discrimination education programme intended to teach children about all aspects of sexuality and sexual behaviour in the city’s schools starting at an early age.

Nonetheless, Mr Trzaskowski worked hard to shake off claims that he was an economic and cultural liberal extremist. He bent over backwards to reassure Poles that he would not reverse Law and Justice’s popular social spending and welfare policies, while sidestepping moral-cultural issues, speaking instead in general terms about equality and tolerance.

Mr Trzaskowski also tried to counter Law and Justice’s accusations that he would sabotage the government by arguing that the President needed to be more independent of the governing party and provide it with constructive opposition.

Poland’s presidential election is now too close to call with polls showing the two main candidates running neck-and-neck. A larger-than-expected first round victory makes Mr Duda the narrow favourite, but he will need to continue to mobilise and energise his voters in smaller towns and rural areas where turnout is traditionally lower.

Although no presidential challenger has ever come from so far behind to win a second round run-off, the government’s opponents in the opposition’s urban heartlands are highly motivated and Mr Trzaskowski appears to have much greater potential to pick up new voters among supporters of the defeated candidates.

The key to the election could well be moderate conservatives in provincial towns who are wary about concentrating too much power in the hands of Law and Justice but like Mr Duda personally and need to be convinced that Mr Trzaskowski can offer a vision of the presidency that goes beyond simply opposing the government.

By Aleks Szczerbiak, professor of politics, University of Sussex. A longer version of this piece was originally published on Aleks’ Polish Politics blog.