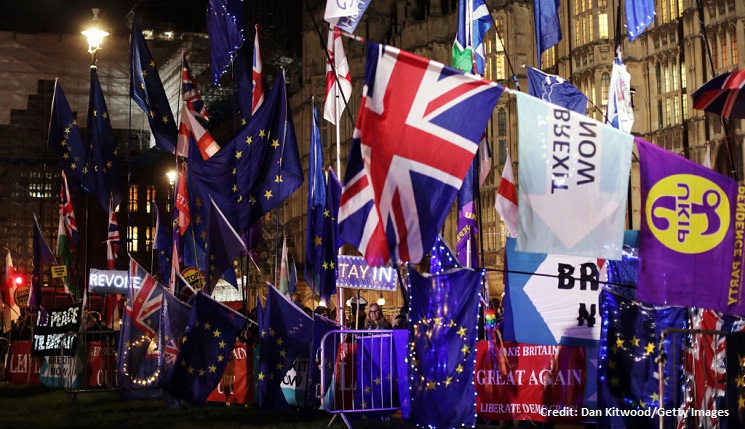 The question of political trust has been at the heart of the road to Brexit and remains integral to the future of British politics.

In the referendum, political distrust and democratic dissatisfaction were correlated with voting to leave the EU.

During the campaign, almost a third (29%) of people who subsequently voted Leave said they had ‘no trust’ in MPs in general (on a seven-point scale ranging from ‘no trust’ to ‘a great deal of trust’), compared to just 12% for people who went on to vote Remain.

A similar divide was observed for satisfaction with UK democracy, where 52% of Leave voters indicated they were ‘very’ or ‘a little’ dissatisfied, compared to 43% for Remainers.

Though there were many forces at work in the Brexit vote, political distrust and democratic discontent played their part in the public’s rejection of the elite consensus on the UK’s membership of the EU.

In the aftermath of the referendum, political trust rallied slightly as the May government enjoyed an initial honeymoon with voters – but collapsed over the period following the botched election, as Brexit hit an impasse with successive deals rejected by Parliament. 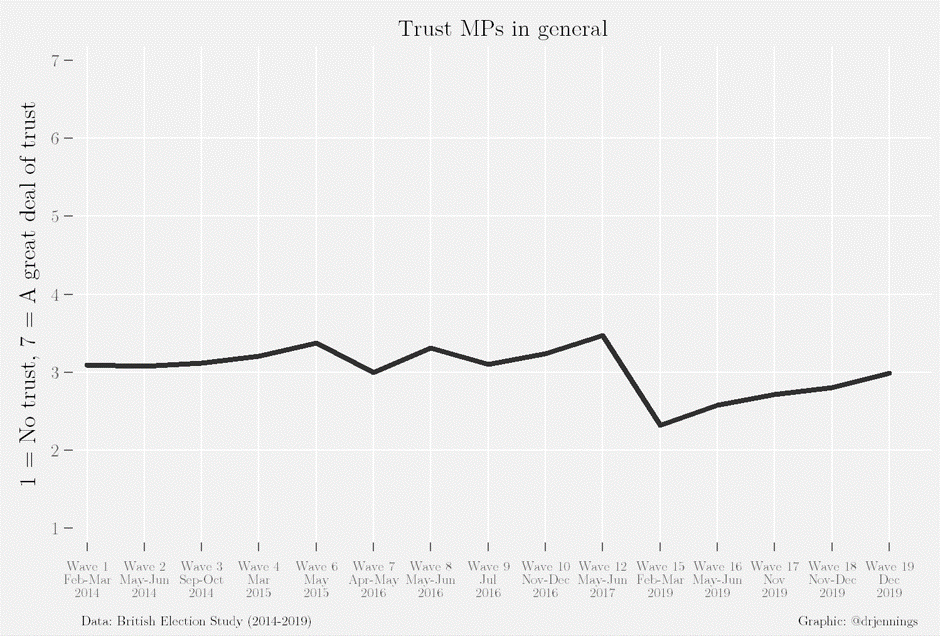 Satisfaction with UK democracy remained rather more stable after the referendum, though similarly fell after the election of July 2017. 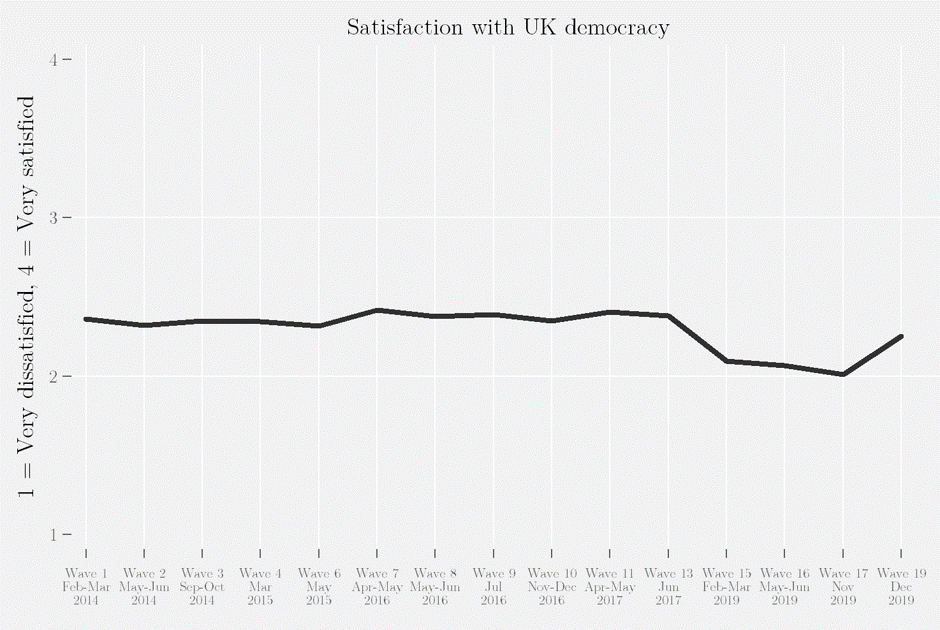 In the latest data from the British Election Study Internet Panel – covering the period in the run-up to the general election, the campaign and the post-election study between November and December 2019 – political trust continued its recovery dating to the start of the year.

Satisfaction with UK democracy also saw a pronounced uptick in the survey wave conducted after the general election.

While the Prime Minister has promised to ‘repay the trust’ of voters who supported the Conservatives for the first time, it seems that trust has already rebounded (somewhat) as a result of the election.

This dynamic – of the revival of trust – has been observed at previous general elections.

These general tides of public opinion conceal a deeper transformation of feelings of political distrust and democratic dissatisfaction among Leavers and Remainers.

In the period between June 2017 and March 2019, distrust and dissatisfaction increased among both Leavers and Remainers, though more among supporters of Brexit as the government’s progress floundered. 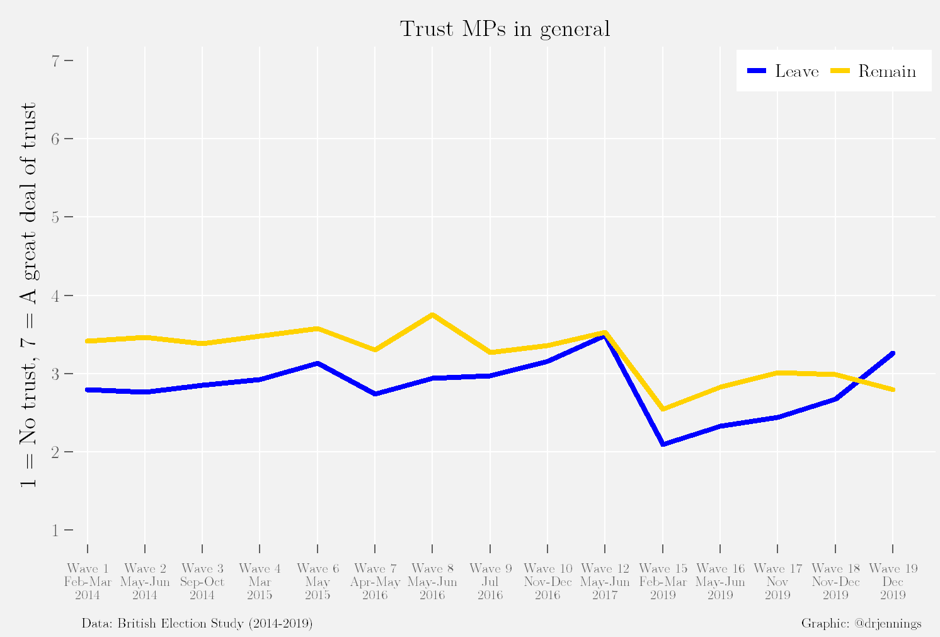 In the survey waves from March 2019 onwards, trust and democratic satisfaction increased among both groups – surprisingly, especially for Leave supporters, given the prevalence of populist rhetoric in politics and news media about the ‘zombie parliament’ defying the will of the people. 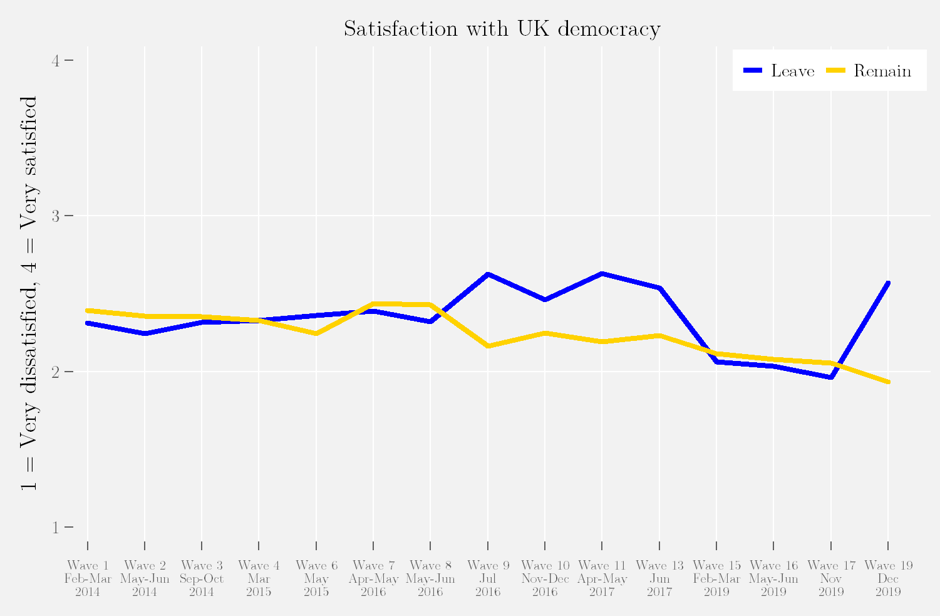 The general election of December 2019 saw what might be called a realignment of political trust – with trust becoming polarised.

In the post-election survey conducted online by the British Election Study, Leave supporters are now significantly more trusting of MPs in general and more satisfied with UK democracy than Remainers.

This is despite the fact that levels of political trust have typically tended to be higher among the educated, professional demographics that were more likely to vote Remain.

Brexit identity seems to now condition trust in the UK’s politicians and democracy.

Confirming this, when asked how often the government in Westminster can be trusted to do the right thing, 23% of Leavers said ‘most of the time’, more than double the number for Remainers (10%).

Remainers were most cynical, with 44% saying government can ‘hardly ever’ be trusted to do the right thing.

This pattern reflects the hardening of Brexit identities, and how they are shaping the orientation of citizens towards democratic politics, in the wake of the general election. 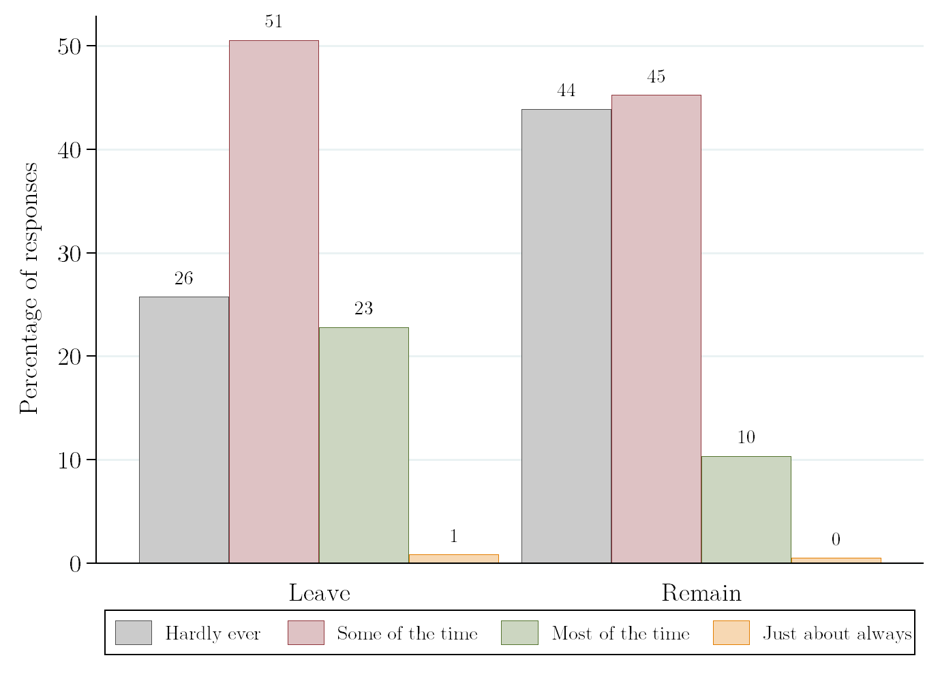 As the future shape of Brexit emerges, we may yet see a further sharpening of these political divides, a reversal of the Brexit lines of distrust.

It is argued by Hetherington and Rudolph that in the US trust judgements have become more partisan as voters use motivated reasoning to evaluate political actors and social and economic conditions, increasing the tendency to support the leaders of your in-group.

Could Leave and Remain be heading in the same direction?

It might it be that the more established politics of competence will return to the fore, in which case maybe we will see a return of collective disillusionment among Leavers and Remainers.

Much remains uncertain, equally we can be sure that it is far too soon to say whether trust will be repaid to voters by political elites in the way they might expect.