Brexit and the European crisis 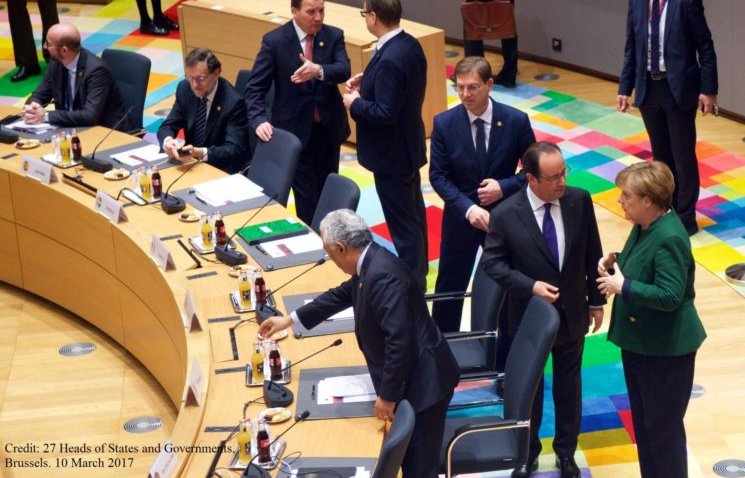 On 29 March, Prime Minister Theresa May pulled the long anticipated Article 50 trigger with her letter to the president of the European Council outlining Britain’s negotiating position. Unsurprisingly, the UK wants parallel negotiations on British exit from the EU and a free trade deal that maximises trade access without the UK being subject to the freedom of movement of labour principle, and to the ECJ’s supranational authority.

The near unanimous reply of EU leaders was a robust and unceremonious rebuke. Angela Merkel called it an illusion that the UK can retain most of its rights and privileges in the single market once it leaves the EU. Negotiations on a trade deal can only commence once all the terms of UK exit can be clarified to ‘a satisfactory degree’. Ms Merkel mentioned in particular the need to resolve the current commitments of the UK to the EU budget, and the status of EU citizens currently living in the UK.

EU leaders throwing proverbial cold water on the content of May’s letter has been invoked by a broad range of experts on the EU as further evidence of a much-needed reality check on British hubris. Britain has a weak hand and is in no position to dictate terms or negotiate core European principles such as freedom of movement and non-tariff barrier access without membership in the single market.

A central issue here is the much vaunted ‘European passport’ of financial institutions domiciled in the City, which gives access to the single market in financial services. In this context, Foreign Secretary Boris Johnson’s contention – that the EU will be accommodating because it needs to export BMWs and prosecco to the UK – is ridiculed.

This interpretation is on the whole sound. The editorial of the Financial Times welcomed Ms. May’s call for a general election exactly because, in its view, a larger Conservative majority would give the government the discretion needed to ratify a deal, which inevitably will include many concessions that will be too much to stomach for hard core Brexiteers in the Conservative Party.

But is the British negotiating position really that weak, and is the EU really that united? On 27 April, the very same paper published a very interesting op. ed. by Professor Hans-Werner Sinn, a prominent economist on the Advisory Council of the German Economics Ministry and former director of the prestigious IFO-Institute.

Sinn is arguably the current arch-ideologue of so-called German ‘ordoliberal’ orthodoxy. The title of his piece must have been music in the ears of Mr. Johnson and Ms. May: ‘A two-speed post-Brexit Europe is best avoided: EU member states should focus on striking a free trade deal with Britain’. The following passage must have been particularly gratifying:

The advantage of free trade is particularly strong when labour cannot move. The EU insists that free trade can only be granted in conjunction with free movement of people, but this is economic nonsense. When labour cannot move, the gains from trade are particularly high. Without free movement of people, the differences in wages between countries remain greater, and the higher these differences, the larger those in the relative prices of goods. This is the basic source of gains from trade.

But Sinn’s article is not interesting primarily because of his usual dry (and highly contestable) economic sanctimony, but rather because of his uncharacteristic politico-economic, indeed geopolitical, frankness: Britain leaving the EU disrupts the ‘equilibrium’ in the Council, between the free trade champions (the UK and what he calls the ‘Deutschemark bloc’ of Germany, Austria, Netherlands and Finland) and the protectionist state-interventionist ‘Latin bloc’.

When the UK leaves, the Deutschemark bloc will lose its pooled veto in the Council. Sinn worries about French presidential front-runner Macron’s call for two-speed European integration (‘a central tenet in French policy since Richelieu’), whereby the mainly western eurozone progresses with a European budget, Eurobonds, common deposit insurance, and common unemployment insurance. Such separation of the north-west from the east ‘would draw a dividing line through Mitteleuropa, while making the northern Eurozone states paymasters of a new Latin currency union’.

Sinn is not an official spokesperson of the German government. Had his hardline version of ordoliberalism prevailed in the run-up to Maastricht, there would have been no monetary union. His ilk is just as agitated over Eurozone governance reforms as Keynesians are, albeit for different reasons. For the likes of Sinn, Draghi’s more moderate ordoliberalism that prevented the euro from collapsing, such as ECB interventions in the bond marking (the so-called Outright Monetary Transactions, or OMTs), are an abomination.

As the peerless account by Kenneth Dyson and Kevin Featherstone of the Maastricht negotiations shows, though hardline ordoliberals are among the key players when Germany generates its policy preferences and negotiating positions, their views never win out in pure form. Still, they are influential and notwithstanding Merkel’s very different kind of official statements, we can be sure that the views of Sinn are heard and listened to in the corridors of German power.

If nothing else, reading Sinn carefully and between the lines reminds us that Brexit is, in a sense, not sui generis but a particular manifestation of European crisis. Decades of anaemic and uneven economic growth has made centrifugal rather than centripetal tendencies prevail in the single market.  Above all, Sinn’s piece reflects deep divisions in the Franco-German axis, which always has been the ‘engine’ of European integration.

The usage of the term ‘Mitteleuropa’ – one would have been forgiven for seeing this concept as a relic from the inter-war period – reveals the extent to which German interests have shifted towards eastern Europe, where German companies have (re-)established an increasingly dense web of so-called regional ‘value chains’.

Conversely, the constraints the German-led Eurozone poses for France become cumulatively ever more acute. Macron’s call is the latest of many failed French attempts to reform the Eurozone, always blocked by Germany. On this, Sinn’s view is very much the German mainstream and it is unlikely to be more successful this time around. If Le Pen wins, all bets are off about the future of the European Union.

Whether or not Sinn’s piece validates Johnson’s prosecco doctrine, the unity of the EU that the UK meets at the negotiating table is at best skin deep.

By Magnus Ryner, Professor of International Political Economy and Head of the Department of European and International Studies at King’s College London. He is the co-author of The European Union and Global Capitalism: Origins, Development, Crisis.