Anti-immigration, pro-sovereignty and proudly British – this is the common perception of the typical Leave voter. But also thought of as economically left behind, and just about managing on a low income in a rundown post-industrial Northern or coastal town.

While the first half of this is broadly an accurate depiction of Leave voters, the second part is much more misleading. Though there are certainly Leave voters who fit this ‘left-behind’ profile, it is only a partial picture of all those who voted Leave. Almost half of Leave voters are in households where earnings are above the median – not ‘affluent’, but certainly ‘comfortable’. These are the subject of a new report by UK in a Changing Europe.

Brexit has, of course, now been delivered. So why should anyone care about differences and nuance within the groups that voted for it? Their will has been done.

But the Leave voting coalition share priorities beyond Brexit, and these may be the basis for a longer-term alliance of voters that crosses the income divide. This may turn out to be part of the wider ‘tilting’ of the political axis, from the old politics of left and right to the new politics of Leave and Remain.

Three sub-groups of the Leave vote are approximated using data from the British Election Study.

They are identified using a combination of their age and household income: those with gross household incomes of more than £30,000 are the ‘Comfortable leavers’, while those earning less than £30,000 are further divided by age (under 55 and 56 or over) to approximate the ‘Economically deprived’ and ‘Older working class’ groups identified by Swales in 2016. This split allows us to study how expectations of Brexit have evolved over the period since the referendum. 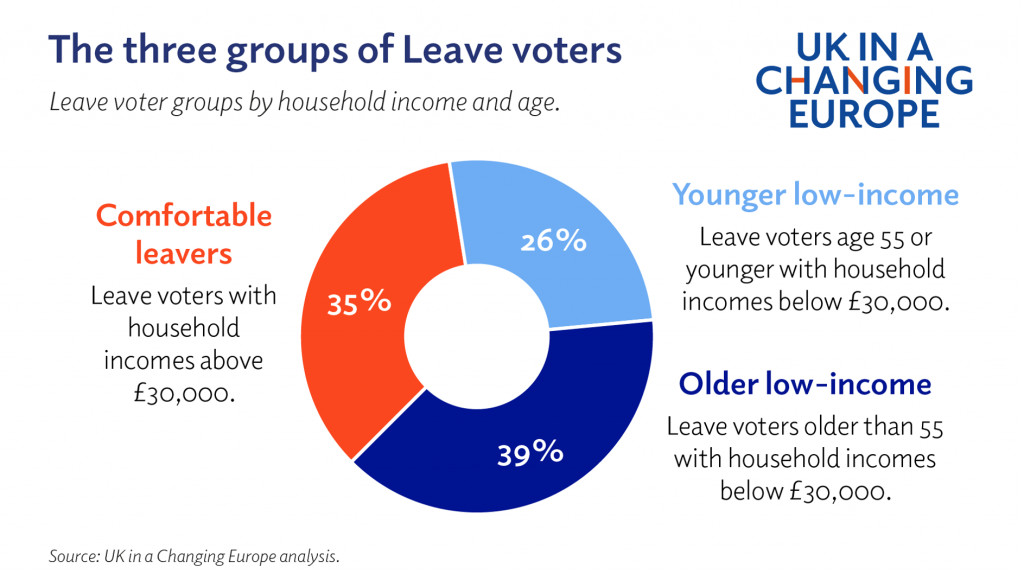 Comparing the ‘Comfy leavers’ to low-income groups in their priorities for and expectations of Brexit reveals a broad commonality between them. An immediate conclusion is that this is a coalition of voters on whom considerable weight can continue to be placed – even after Brexit – as there are a range of issues where they share beliefs, expectations and desires. 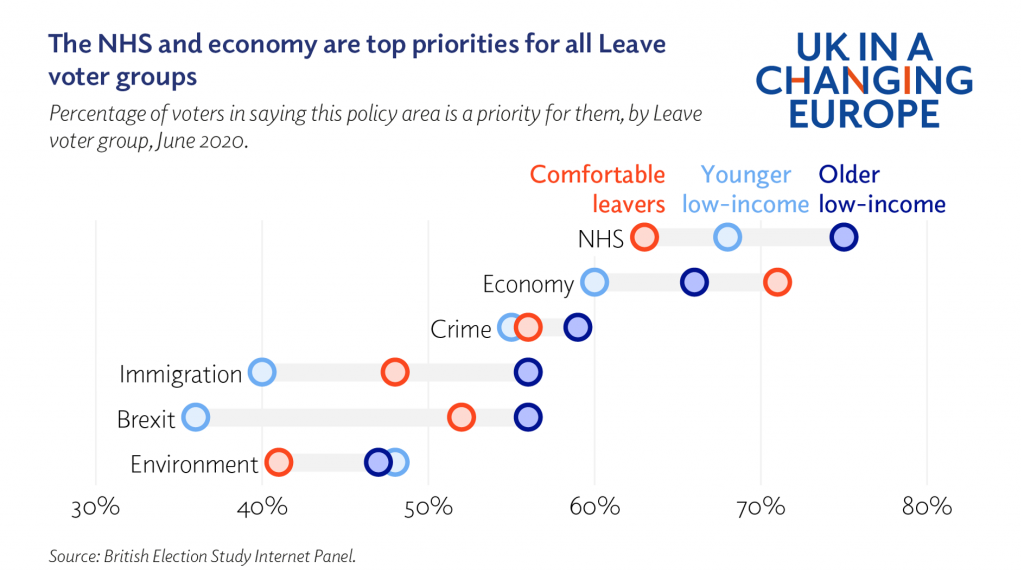 In the summer of 2020, the economy and the NHS were the two key priorities for Leave voters, unsurprising in the context of the global pandemic and economic crisis. More than six in ten voters in all three sub-groups said these were one of the most important priorities for them.

But tackling crime was also an issue for all the sub-groups – with more than half in each saying it was an important priority for them.

But while there were shared priorities among the sub-groups on the economy, the NHS and crime, the priorities of the young low-income voters differed from the other two sub-groups, with just over one in three saying Brexit was a priority for them, compared with more than half of older low-income voters and comfortable leavers.

The young low-income voters were also less likely to list immigration among their priorities.

Though the workshops with the Comfy Leavers showed that many of their hopes and expectations were around improvements to the social fabric that would require additional government spending, the survey data suggests this enthusiasm is more muted than among the low-income Leave voters.

This is also borne out in the core values of these groups of voters. The comfortable Leavers were the most economically right-leaning group, some distance from the young low-income leavers with the older low-income voters between the two.

This highlights the elements which these groups have in common, and on which the coalition of Leave voters is likely to prove strongest. These are the issues that bind this coalition together, while issues of economics and welfare are more likely to reveal differences within it.

At the time of the 2019 general election, the British Election Study asked voters about their expectations of the UK leaving the EU, these were modest. Just two areas stand out where a majority of Leave voters (in any group) had positive expectations: (reducing) immigration and increased power for the UK Parliament. 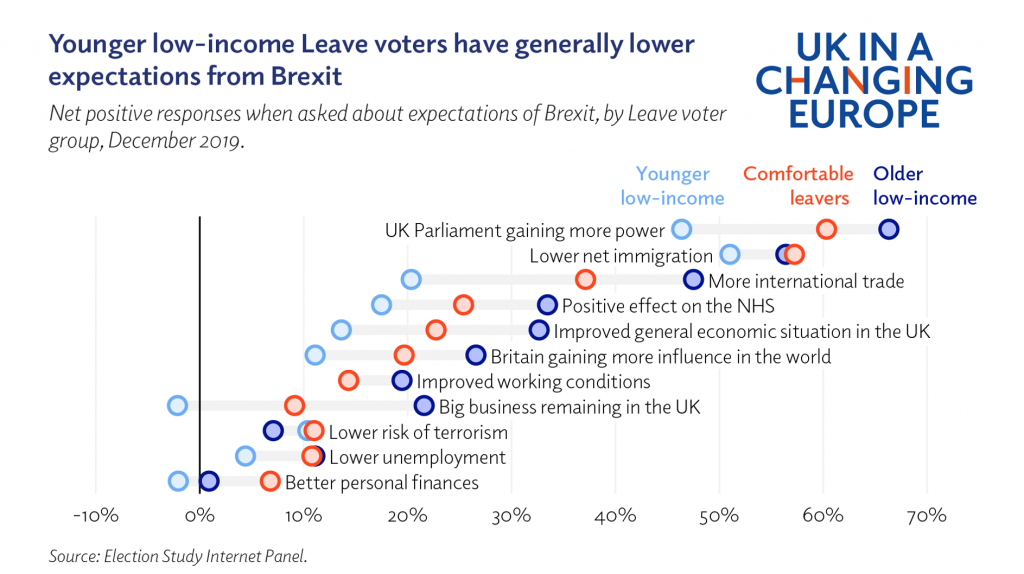 Younger low-income Leave voters generally had the lowest expectations, though they shared the relative optimism of the other groups in relation to immigration and the UK Parliament having more power.

No sub-group was predominately positive about the impact of Brexit on the general economic situation in the UK, though older low-income voters did have higher expectations. Nor were there high expectations concerning the wider domestic impact of Brexit.

Personal financial situations, unemployment and working conditions were not expected to see positive impacts by large numbers of voters in any of the sub-groups. Indeed, in all the areas relating to domestic impact, the most common expectation that there would be no change as a result of Brexit.

Expectations of Brexit itself were modest, but their expectations and desire for a wider renewal of the national and local social fabric, as seen in the workshop discussions, were much higher.

While this makes it easy for Brexit itself to live up to expectations it may make it much harder for the Government that delivered it to do so.

The post-Brexit expectations and aspirations of these different groups of Leave voters are important, and they will shape British politics over the rest of this Parliament as Johnson’s Government seek to make good on promises to ‘level up’ – and, for that matter, as the Opposition seek to find a path back to power through the electoral battlegrounds of post-industrial England.

By Paula Surridge, deputy director, UK in a Changing Europe.