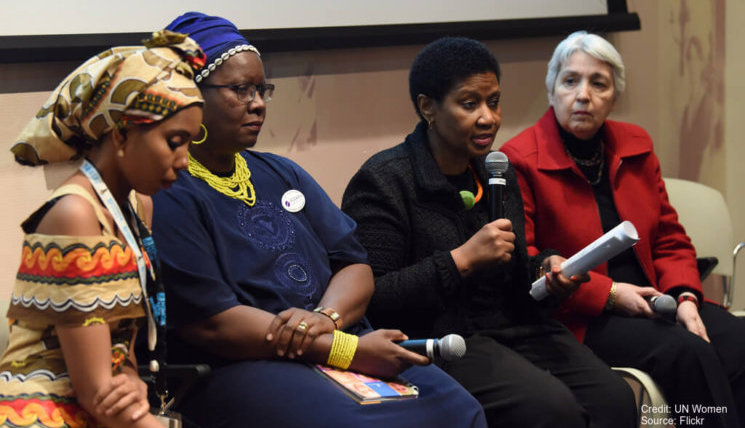 Some people tell it as it is. Amongst those who speak straightforwardly is Helena Kennedy QC, who says of the minority of her legal colleagues who in the EU referendum supported Leave, “The mad Brexiters … almost invariably … don’t like homosexuals, they don’t like foreigners and they hate human rights.”

Others’ concerns about the UK’s failure in the Brexit negotiations to address issues like gender and the needs of vulnerable people, both in Britain and across Europe remain put aside. Yet research shows significant gender (and age) differences in voting on Brexit: 61% of males aged 18 to 24 years voted Remain, whilst an equal 61% of males in the 50 to 64 age brackets supported Leave. Conversely, women between the ages of 18 and 24 voted 80% for Remain.

Several subsequent studies have likewise shown the gendered differences in perceptions and potential impact of Brexit. These range across the engagement (or otherwise) of women and men in the politics of Leave, the likely direct economic consequences for women and men, and concerns about gender equality and human rights.

More recent analysis of Brexit has become framed for some as a ‘crisis’ of masculinity. But ‘women and children’s’ issues – in reality wider matters of fundamental human rights – have, with a few honourable exceptions (like the work of MEPs Richard Corbett, Mary Honeyball and Julie Ward) been largely ignored in the corridors of power.

The noise is from men, about ‘male’ concerns, whether the (mostly older, mostly white) men in question are northern working class or, equally importantly, comfortable chaps ensconced in the shires.

Few such people worry about protecting the most vulnerable in our communities: those subject to human trafficking, those experiencing domestic violence, those made to undergo child, early or forced ‘marriage’ (CEFM) and those under threat of harmful traditional practices (HTPs) such as female genital mutilation (FGM).

Most of these cruelties arise from economic patriarchy, inflicted to increase the power of men over girls and women. This violence against women and girls (VAWG) and gendered disadvantage knows no national boundaries – yet even EU studies courses rarely adopt a gendered framework.

Brexit would take the UK out of various international legal frameworks and protective networks across Europe intended to reduce the risk of damage to vulnerable, often female, people: those mentioned above as well as refugees, migrants and others at risk of economic exploitation and violence of many sorts.

Concerns about side-lining issues such as FGM are not however only around formal EU frameworks. Amongst other matters which have not been properly acknowledged is the reduced support in the UK after Brexit for social care and protection, education, the NHS, vulnerable and young people’s services, voluntary organisations – especially the smaller ones which attend to local community issues like FGM – and policing.

If austerity continues (as it surely would) there will simply be fewer resources to address the needs of vulnerable women and girls.

The hardening of economic structures which especially harm the interests of marginalised people from the poorest countries is not considered – and in these places women have the least power to lead positive, autonomous lives, and harmful traditional practices such as FGM are most often found.

The increased British xenophobia and hostility to ‘foreigners’, migrants and refugees is overlooked: already in the UK we see intolerance of ‘the other’, with a disregard for human rights and a lack of compassion or understanding of the intolerable circumstances in which some find themselves.

Migrant mothers who plead not to be sent back ‘home’ to places where their daughters may be forced to undergo FGM are deemed to be lying when they find the courage to explain their fears to the authorities.

And the risks in refugee camps of FGM and CEFM as people flee across borders are ignored. Who is tasked to look out for such criminal acts in communities of vulnerable, migrant people? The EU Victims’ Rights Directive has offered some level of protection, but what now?

Brexit will bring about an erosion of cross-border collaboration between EU enforcement agencies and the UK. How could European Arrest Warrants work if the UK is no longer in the EU?

Who will co-ordinate the sharing of intelligence? Will the UK become, in terms of prevalence, the European ‘capital’ of FGM? Finally, important European research collaborations on FGM and wider gendered violence – as in other academic fields – are endangered by Brexit.

Already, EU27 researchers face difficulties engaging with UK academics at a time when together progress is being made across the continent on the prevention of FGM and on attending to the needs of those at risk and survivors.

The UK is about to lose expertise and impact, but (although precision is difficult) it is estimated that around half a million women and girls in Europe, including many in Britain, have had, or are at risk of, FGM.

These vital matters have been cast aside whilst the ‘blokes Brexit’ staggers on; but they will not go away. Such problems will re-emerge and cost the UK dearly if they are ignored now.

And the omens are not good: as yet the UK government has not even ratified the 2011 Council of Europe (NB not European Union) Istanbul Convention on preventing and combating violence against women and domestic violence.

Progress in the UK and beyond towards FGM and wider VAWG eradication is severely compromised by Brexit. Large numbers of Leave supporters favour capital punishment, are hostile to feminism as they understand it and, as Helena Kennedy reminds us, oppose human rights. They are unlikely to be vexed about gendered violence.

The first UK conviction for FGM has just been secured, but the fall-out from ignoring that crime in future would be enormous, both for those most vulnerable to crimes such as FGM, and to British society as a whole.

By Hilary Burrage, adjunct professor at the Buehler Center for Health Policy and Economics, Feinberg School of Medicine Northwestern University, Chicago, and a Trustee of the Global Media Campaign to End FGM.