Project comeback: will the Liberal Democrats really give May a bloody nose? 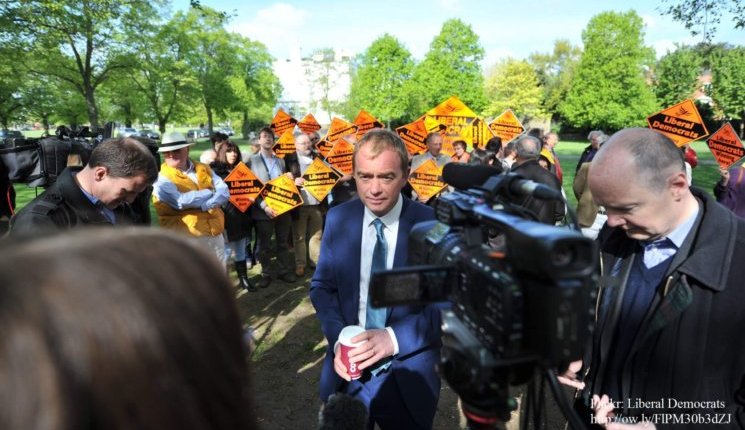 ‘Comeback is a good word, man’, said actor Mickey Rourke when he was catapulted back into Hollywood stardom after a long stint in the wilderness. Tim Farron is no Mickey Rourke but at the rapidly approaching general election he too is betting on a comeback.

Liberal Democrats have a score to settle. Two years ago, the traditional third party in British Politics were a mere 25,000 votes away from losing all of their seats in Westminster. But the vote for Brexit has given Tim Farron and his party a lifeline. With Labour divided the party has taken an opportunity to pitch to disillusioned Remainers.

And they have made some inroads. Local by-election victories for Liberal Democrats are now commonplace while the parliamentary by-election in Richmond Park provided further evidence of a comeback.

Now, Farron eyes a snap ‘Brexit election’ as an opportunity for a full-scale comeback, claiming that Prime Minister May is ‘playing on the Liberal Democrats ground’. But could his party really give the Conservatives a ‘bloody nose’ by winning back some of the seats that were lost in 2015, and possibly more?

Let’s start with the current state of play. In 2015, the Liberal Democrats were reduced to a rump of only eight MPs, with the Richmond Park victory increasing this to nine. Today, Liberal Democrats are the main opposition in 62 seats, in third place in a further 36 seats, and fourth place in 338. The good news for Farron is that in 16 seats Liberal Democrats are within 10% of the incumbent. Ten of these seats are held by Conservatives and all are in the south or south west England.

A further 3 are held by Labour and 3 by the SNP. There is also an ‘outer ring’, where Liberal Democrats are between 10 and 20% behind the incumbent. Of these more distant prospects, 15 are held by Conservatives, 4 by Labour and 5 by the SNP. Of the 9 Liberal Democrat MPs, 5 have a majority of less than 5 percentage points, with the incumbent in the most marginal seat (Southport) not seeking re-election.

What happens from here? One longstanding problem for Liberal Democrats has been to translate votes into seats. In the past, targeted campaigns helped but did not resolve the disparity between the party’s share of the vote and its number of MPs. One

reason was the so-called ‘credibility gap’ – where voters are reluctant to vote for a party they believe has little chance of winning. Historically, Liberal Democrats tried to offset this through strong, local campaigns.

This campaigning, which two years ago saved Liberal Democrats from complete annihilation, could be more important in 2017 given the shorter election period. In 2015, the Conservatives ‘decapitation strategy’ across southern England relied on a ruthlessly efficient ‘joined-up’ campaign, driven by Conservative headquarters in cooperation with local parties.

Huge sums were thrown at key south and south-west battlegrounds for nine months or more. The thinly-resourced Liberals were out-gunned. But this time, with less than 50 days until polling day, the Conservatives are unable to replicate this sustained ferocity. You could argue that this will give Liberal Democrats more of a fighting chance.

The shorter campaign could help them in other ways. Since the vote for Brexit they have prepared for a snap election and selected candidates in seats that were lost in 2015, as well as others on a long range target list. This could be a double-edged sword. Familiar faces like Vince Cable, Ed Davey, Simon Hughes and Jo Swinson will remove credibility problems but such faces might remind voters of the party’s role in the post-2010 coalition.

Nonetheless, all remain within striking distance. Vince Cable and Ed Davey require a direct swing from the Conservatives to Liberal Democrat of less than 2.4% while Jo Swinson requires a direct swing from the SNP of 2%. If their local popularity remains, the changed climate since 2015 may mean that such seats are more attainable than they would be with new candidates.

But the bigger and more popular argument is that Liberal Democrats will be boosted by the ‘Brexit election’ whereby Remainers will flock to the orange banner. But our evidence suggests that while there is potential, the party faces an uphill task.

This reveals a cluster of 9 seats where Liberal Democrats are within striking distance of victory, within 10 percentage points of the winner, if indeed the Remain vote switches over en masse.

Four of these seats are held by Conservatives (Bath, Twickenham, Kingston and Surbiton, Lewes) and two by Labour (Cambridge, and Bermondsey and Old Southwark). Worryingly for Farron, the remaining three are held by the similarly anti-Brexit SNP.

There is also second cluster of eleven seats where the Remain vote surpassed the 50% mark and in some cases was much higher, but where Liberal Democrats are up to 20 points behind the winning party. Once again, the task facing Farron is hard – six are held by the SNP (This includes Berwickshire, Roxburgh and Selkirk where the Liberal Democrats came third in the seat but are less than 20% behind the winner).

Of the remaining five, three are Conservative (Cheadle, Cheltenham and Oxford West and Abingdon) and two Labour (Cardiff Central, and Hornsey and Wood Green). 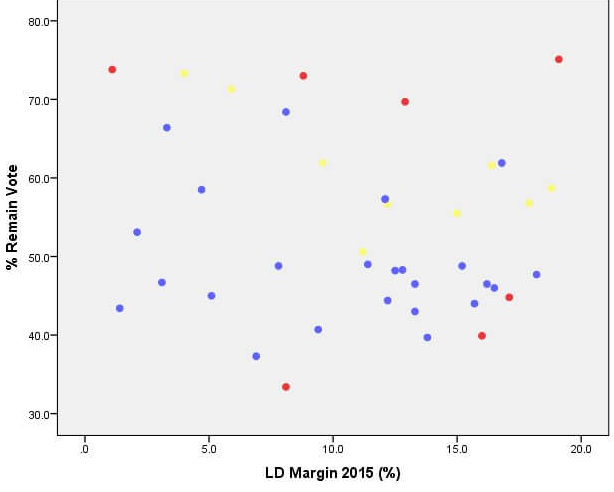 A third cluster is more interesting. There is a distinct grouping of seats that were around or just below the average Remain vote and where Liberal Democrats are between 3-18% behind the incumbent. In most cases the swing required for them to win is not excessive.

Worryingly for Prime Minister May, these are predominantly Conservative-held seats that turned blue in 2015 –seats like like Thornbury and Yate, Colchester, and Sutton and Cheam. Here, as elsewhere, turnout will be key. If – and it is a big if– the Liberals can sweep up Remainers and get them to turnout they could easily break the 20 seat mark and put a dent in May’s majority (see Table 1). Of course, it is not all one way. At the same time, of the 9 Liberal Democrat MPs Norman Lamb in Norfolk North (where 58% voted for Brexit) looks vulnerable to a Conservative challenge if this post-Brexit realignment plays out. 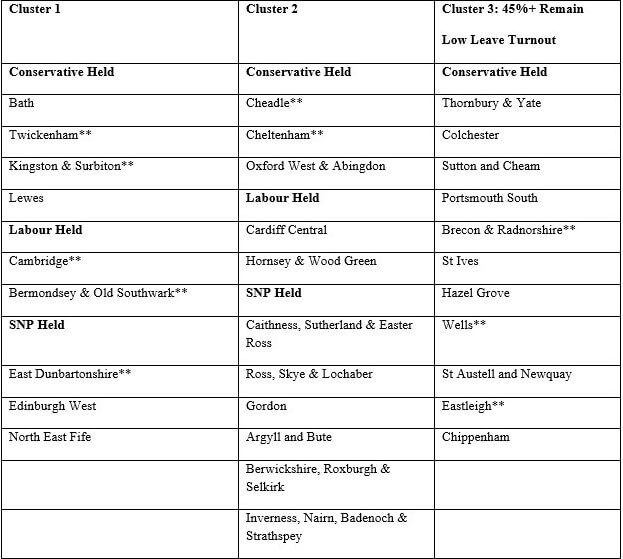 *Note: other possibilities include Berwick upon Tweed, and Eastbourne. The latter is extremely marginal but the leave vote was substantial. Other marginal seats such as Torbay and Yeovil would be unlikely to go back to the Liberal Democrats under a Brexit election scenario (although they come in play if not). It should be noted there may be anomalies like St Albans, which voted Remain, where the party has and continues to poll well. But in previous elections the strong local platform has not translated into voting Liberal Democrat in the general election. Maidstone & the Weald is a long term target but a strong Brexit vote there rules it out under this scenario. **Previous Liberal Democrat incumbent confirmed as standing again.

Turning to the Conservative-Liberal Democrat battlegrounds, Farron and his party will do better where they have past success and an activist base. The party is positioning itself against the Conservatives and will target seats that are marginal and have a healthy Remain vote. But, as we have seen, the gains are limited given the scale of the party’s collapse in 2015. So are there long term targets where we could see a swing to the Liberal Democrats?

If the Liberal Democrats get a poll bounce during the campaign and hit the heights of 16-17% then there are seats that could come into play in the shadow of the election. The next figure shows the Remain vote by 2015 Liberal Democrat margin in seats currently held by the Conservatives but which used to be held by Liberal Democrats in the recent past. 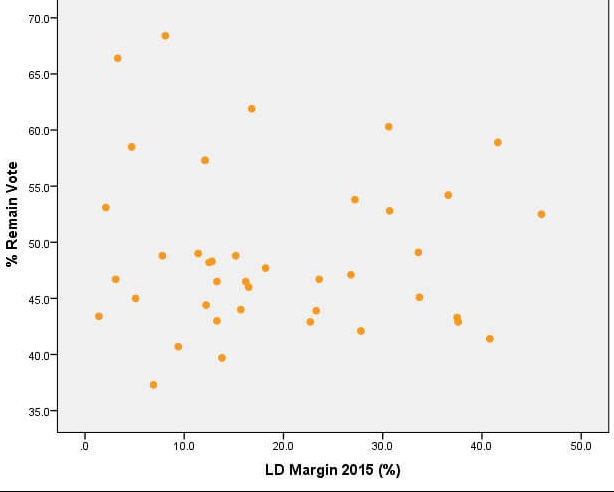 There is a cluster of pro-Remain seats with a Liberal Democrat heritage where Farron will find a receptive audience – Winchester, Guildford, Harrogate and Knaresborough, and Romsey and Southampton North. But these would require goliath swings –Liberal Democrat candidates are 30-40 points behind. This also reveals how the Conservatives have a buffer, even in areas where historically the Liberal Democrats have been strong, as in Cornwall and Devon.

There are 16 seats in the south-west that used to be held by the Liberal Democrats but which recorded below average Remain votes at the referendum. So if this does become a Brexit election then to win these seats back Farron will need to do a lot more than simply bang on about the perils of hard Brexit. In these seats Liberal Democrat gains in 2017 seem unlikely.

Another factor that could easily work against the Liberal Democrats is the UKIP vote. UKIP is already finding it difficult to retain its 2015 vote and how this vote splits could be crucial. May and her team are doing everything in their power to tempt back UKIP voters. If this happens on a broad basis it could have worrying implications for Liberal Democrats.

UKIP also achieved this feat in 15 of the 16 seats in the south west which had a higher than average Leave vote. What does this mean? The Brexit election could backfire on Farron. If Lynton Crosby, who knows these seats well, guns after Leave voters they may vote tactically to keep out the Liberal Democrats in order to get what they really want –Brexit.

Turning back to the most enticing prospects for Liberal Democrats in Cluster 1, only the Conservative-held Lewes had a UKIP vote of more than 10%, reaffirming how these seats represent the best hope for Farron. In sharp contrast, all of the seats in Cluster 3 have substantial UKIP votes which the Conservatives will look to mobilize as a firewall against Liberal Democrat gains. In conclusion, therefore, Theresa May’s gamble of ‘playing on the Liberal Democrats ground’ is not without risk but seems a safe bet.

She has a good chance of holding onto many ‘traditional liberal’ heartland seats that her party captured in 2015. The Liberal Democrats may stage a comeback of sorts, but this may be less impressive than many currently expect.