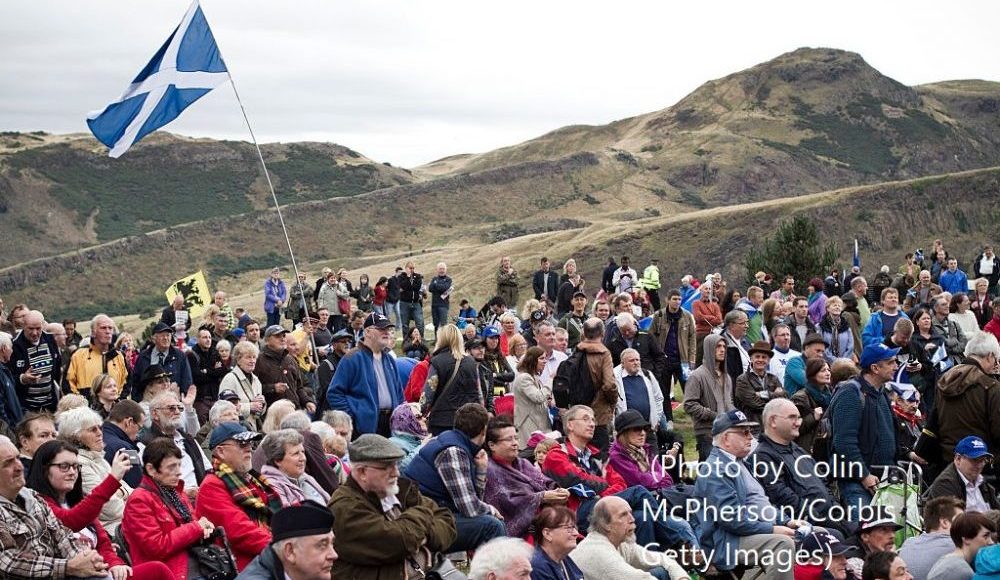 The Scottish Remain vote in the 2016 referendum was always likely to create shock waves as exit approached. Voters in Scotland have been more likely to believe it was wrong to the leave the EU, more hostile to a harder or no deal Brexit, and less positive about the Government’s handling of Brexit.

Nearly 60% believe Brexit has made independence more likely. Disquiet about the UK Government and its policy is unsurprising since the majority of Scots did not vote for it, the SNP having improved in the 2019 UK General Election on its fortunes in 2017.

But perceptions of the current Government’s handling of the coronavirus crisis have made things worse.

This is not to say that Scots believe the Scottish Government is doing brilliantly. However, support for Nicola Sturgeon remains high and outright antipathy low: indeed, only two per cent of Scots gave her 0/10 for her performance.

The PM himself — who was awarded a zero by 40% of Scots — is one source of poor Government polling. We knew as far back as the summer of 2019 that a Boris Johnson premiership would not be popular with Scots.

Half of Scottish Conservative voters claimed they would not vote for the party in 2019 if he became leader, while one in five No voters claimed a Johnson premiership would prompt them to vote Yes in any independence referendum. Various polls showed that the prospective Prime Minister was thought to put party before country and would be unlikely to unite the country. Opinion has not improved with familiarity.

These three factors — Brexit, assessments of the handling of coronavirus, and Boris Johnson — help explain why support for independence is currently high.

Since the 2019 General Election, there have been 21 opinion polls, of which only two have shown opposition to independence in the lead. This is unprecedented in Scotland in terms of both the sustained lead, and its size.

Notwithstanding a handful of polls showing Yes ahead after the 2014 and 2016 referendums what we are seeing now is unlike this in scope and scale.

This is not to say that the fundamental arguments have changed significantly: economic risk remains the most forceful argument for the status quo, resonating with No and Yes voters, while a sense of Scottish difference and a lack of trust for Westminster is seen as a powerful argument for independence.

The anticipated economic chaos from Brexit and lockdown cuts both ways: individual exposure to economic risk might be heightened, but the portrayal of a clear dividing line between, on the one hand, the existing union as an economic safe-haven and, on the other, an independent Scotland plagued by economic uncertainty is more blurry than in 2014.

Looking ahead to the Scottish election of May 2021, the SNP has a clear lead, having polled at over 50% since December 2019. Currently at 55% it could drop 10 percentage points and still be on course to form a majority Government.

That level of movement is not impossible – the SNP’s support dropped by six points before the 2016 election — but it seems unlikely as any fall in the SNP’s popularity requires another a corresponding rise for another party. There appear rather few contenders for this.

With the exception of three polls in late 2019, the Liberal Democrats have not polled in double digits for Holyrood vote intention since the 2016 election. Labour remains in a difficult position.

While its supporters are now more in line with its constitutional position (with only 25% saying they’d vote Yes), this is in part because they have lost independence-supporting or ‘indy-curious’ voters since 2014.

It is the Conservatives who are in the most interesting position. In past elections, the perception that the SNP was the best party to ‘stand up for Scotland’ won it votes.

As leader of the Scottish Conservatives, Douglas Ross has clearly attempted to portray the Tories as a unionist party able to defend Scotland’s interests.

His efforts have not been helped, however, by various interventions by Boris Johnson suggesting that devolution has been a mistake, even ‘a disaster’.

Given what is occurring in the opinion polls at the moment, we can anticipate various themes in the 2021 election campaign.

First, a debate over whether to hold a referendum. While there might be limited enthusiasm in the Scottish electorate for holding a referendum very soon, the settled view is that it should be a matter for the Scottish rather than the UK Parliament.

Second, we can reasonably anticipate debates about how to steer Scotland through the economic recovery from successive lockdowns and, possibly, Brexit.

The arrival of new competences in 2015/2016 now means that devolved election campaigns offer more than competing promises to spend money, and we can anticipate discussions about how to generate sufficient wealth to pay for public services in a post-Brexit, post-Covid-19 Scotland.

Third and lastly — and they are nearly always last these days — we can anticipate robust debates about devolved policy competence around the state of the Scottish NHS, the state of education (including the exams fiasco of 2020) as well as individual flash points (the Salmond trial) and legislation halted due to coronavirus (bills on gender recognition reform, foxhunting, and the circular economy among them).

Support for independence is now routinely polling above 50%, and the SNP is streets ahead in election polling.

But Nicola Sturgeon and her party are not invulnerable to claims that after 14 years in office, they might have made more striking gains for Scots.

By Ailsa Henderson, Senior Lecturer in Politics at University of Edinburgh. This piece was taken from our Brexit and Beyond: the union report.