The years following the financial crisis saw net tax rises and substantial spending cuts. Borrowing fell from the post-war high reached in 2009–10 to a level slightly below that seen prior to the Great Recession.

Even before the pandemic, the Government had loosened fiscal policy. Austerity was declared to be ‘over’ and spending increases, such as a multi-year settlement for the NHS, and a commitment to increase investment spending to levels not maintained in the UK for 40 years, were not matched by tax rises or cuts to spending elsewhere.

At the same time, successive official forecasts had downgraded assumptions about underlying growth, reducing the outlook for revenues.

The era of falling borrowing was coming to an end, with a Government wanting to spend more without being willing to tax more. 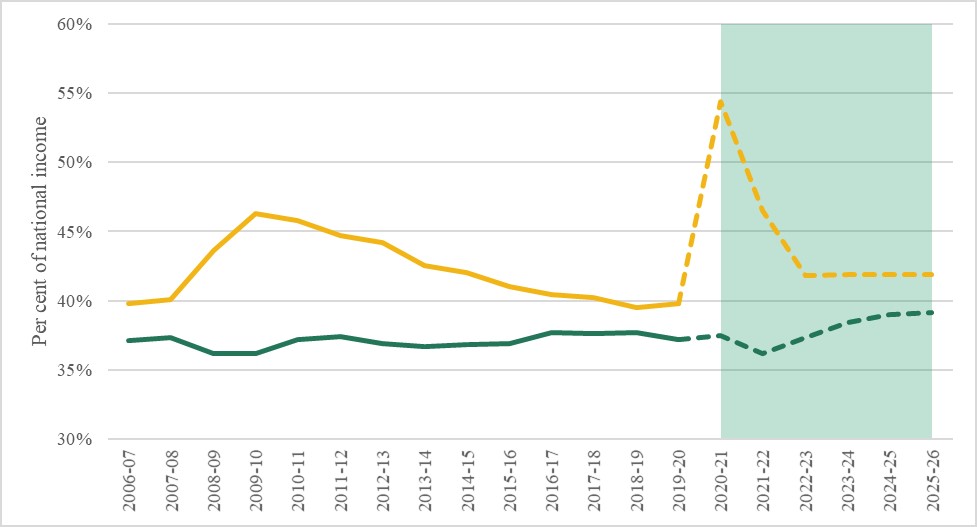 The size of fiscal support provided is unprecedented in the UK in modern times: far exceeding that seen in the financial crisis.

In addition, the sharp reduction in economic activity during the lockdown depressed tax revenues and increased spending on universal credit.

As a result, borrowing is forecast to climb to 17% of national income in 2020–21 – its highest level in over 300 years outside of the two World Wars.

For the public finances, what matter more than the size of this spike is the speed and – in particular – the completeness of the recovery.

If the economy bounces back, and revenues recover, then the additional debt accumulated this year could be managed back down over a long period. As long as the cost of debt interest remains cheap, as it has done in recent years, this wouldn’t be much of a problem.

Unfortunately, rising unemployment and business failures will leave permanent scars, the size of which will depend on a number of factors such as the speed and effectiveness of the roll-out of vaccines and on how successful policy is in averting high levels of long-term unemployment.

Where are we headed?

The pandemic has been an extreme shock: comparing the increase in forecast borrowing in 2020–21 since March 2020 with the distribution of errors in official borrowing forecasts 12 months out suggests that the public finance shock is of a magnitude we should expect only once every two hundred years.

As, hopefully, the coronavirus pandemic is brought under swift control by the successful rolling out of vaccines, we will begin to find out more about its legacy for the economy and the public finances.

The aftereffects are likely to put pressure on public spending. For example, extra resources are needed for the NHS to tackle the large backlog of non-Covid-19 care that has been postponed, and schools will need to support pupils who have fallen behind during the lockdowns.

In both these cases, existing inequalities will be exacerbated unless the legacy of the pandemic is addressed. Older adults in the most deprived areas were 40% more likely to have hospital treatment cancelled than those in the least deprived areas.

Among primary school pupils, learning time for the poorest children fell by much more than in richer households during the first lockdown; pupils in better-off families were doing on average 75 minutes more learning each day than their more disadvantaged peers.

While adjustment pressures will be felt – to varying degrees – by economies around the world, the UK economy is also facing a substantial restructuring due to Brexit. Sectors that trade a lot and are therefore most affected by Brexit are generally distinct from the customer-facing sectors that have borne the brunt of the pandemic.

As with coronavirus, Brexit will create additional spending pressures. But it is also likely to have a substantial long-run effect on tax revenues. The agreement reached by the EU and the UK in December ensures tariff- and quota-free trade.

Whilst this avoids the even more severe disruption of an exit on WTO terms, the UK is nevertheless leaving the Single Market, which goes much further than a free trade agreement in harmonising standards and regulations.

Leaving the Single Market thus erects non-tariff barriers to the tax-rich export of services, which will be particularly costly from the point of view of the public finances.

The Office for Budget Responsibility estimates that in the long run, the UK economy will be four per cent smaller than it would have been, had the referendum never happened, a larger effect that the three per cent of permanent damage that it estimates the pandemic will leave behind in a central scenario (though far smaller than the damage resulting from the global financial crisis and associated recession).

Both Brexit and Covid-19 are expected to lead to a smaller economy, lower tax revenues and additional spending pressures.

Recognising this, the Chancellor set out plans for large net tax rises in his 2021 Spring Budget, which, when combined with pared-down spending plans, might be enough to stabilise debt within five years if the economic recovery proceeds as planned.

But sticking to spending plans that are less generous than what was envisioned pre-pandemic, and implementing the biggest tax rises from any Budget since spring 1993, is likely to prove extremely difficult.

Add to this those long-standing spending pressures related to growing demand for health, social care and state pensions, and the task of returning the public finaces to a sustainable path, with inflationary pressures in check, may yet require even greater tax rises.