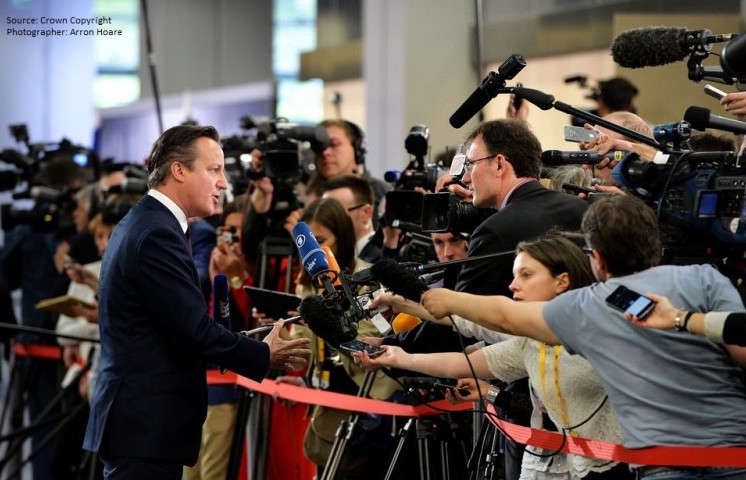 On 23 June 2016 a referendum will be held on whether Britain should remain part of the European Union. The vote represents arguably the most important political decision for a generation, and with so much at stake it is imperative that citizens have sufficient information to make an informed decision.

However, research suggests that public knowledge and understanding of the issues at stake is very limited. Recent research carried out by the Electoral Commission found that the ‘majority’ of people they spoke to ‘stated that their personal understanding of how the EU worked was low’ and that they felt ‘under-informed about the EU as an institution, as well as about the arguments for and against the UK remaining a member’.

Some of this can be attributed to a lack of public interest: Britain has consistently had one of the lowest turnout levels in European elections since their introduction in 1979. However, it is also likely be related to the nature of press and broadcast news reporting, which according to research are the key information sources for the public. Most studies in this area have focused on how the British press has reported on the EU and its findings have been consistent and unequivocal.

The majority of the British press are sceptical, if not openly hostile, to the European institutions and further integration. In the tabloid press, there has been evidence of false and misleading reporting, as well as negative stereotyping which has, at times, bordered on the xenophobic. In a review of press coverage of David Cameron’s recent EU negotiations, City University professor and former Daily Mirror editor, Roy Greenslade, noted that the anti-EU message was being “hammered home relentlessly with news stories, leading articles, commentaries and cartoons”. This, he suggested, “in a drip-drip-drip process over months, if not years” meant that “newspapers have an impact on readers who never think about, let alone question, the propaganda they consume.”

The existence of such a partisan press means that the public is especially reliant on broadcasting to provide a more balanced and comprehensive picture of Britain’s relationship with the EU. Cross cultural studies that have examined broadcast coverage across the EU, have found that there is little reporting outside of major events (e.g. referendums and summits), that public service broadcasting tends to feature more coverage than its commercial counterpart, and that the presence of Eurosceptic parties tends to lead to an increase in reporting.

Research which has focused specifically on British television reporting, has found that when it comes to reporting on the economic implications of EU membership, coverage tends to give more space to the negative consequences for both British citizens and businesses than it does to trade benefits or social entitlements.

However much of this research is more than a decade old. More recently, in 2013, myself and colleagues at Cardiff University’s School of Journalism, Media and Cultural studies conducted research which analysed the BBC’s online and broadcast coverage of the UK’s relationship to the EU, as part of a BBC funded impartiality review. Our broadcast sample looked at a month’s coverage of key mass audience bulletins in both 2007 and 2012. On television these were the News at Ten, Newsnight and BBC1 Breakfast News (7-8am), whilst on radio we examined the Today Programme (7-8:30am), Radio 5 Live’s Breakfast and Your Call (9-10am), plus Radio 1 Newsbeat (12:45pm).

The most striking finding to emerge from our analysis is the dominance of political (primarily Labour and Conservative) sources who accounted for 65.0% of all source appearances in 2007 and 79.2% in 2012. The next most accessed source category was other media outlets (8.6% in 2007, 7.4% in 2012), mainly the Eurosceptic press, often in the context of a review of headlines on the Today programme. Civil society voices such as NGOs/charities/pressure groups (2.4% in 2007, 1.3% in 2012) or trade unions (0.5% in 2007, 0% in 2012) struggled to achieve any substantial access. Another key findings was the dominance of a single story over each sample period. In 2007, this was the Lisbon Treaty which accounted for 70% of reporting, whilst in 2012, 72.4% of coverage focused on the parliamentary debates over the EU budget.

Four clear interlinked conclusions arise from our research. First, BBC coverage of the European Union is driven by major events and or disputes among key political elites, which means that it only covers a restricted range of stories. Secondly, reporting is very heavily focused on the perspectives of Labour and Conservative politicians, so that audiences are presented with a relatively narrow spectrum of debate. Thirdly, reporting of the EU tends to take place through the prism of Westminster infighting, either between Labour and the Conservatives, or within the Conservative party.

A key consequence of this is that much of the reporting is narrow and procedural with relatively little focus on detailed analysis of policy. Whilst viewers and listeners were exposed to substantial information about ructions at Westminster (‘The “bastards” are back. David Cameron proves unable to command even his own party over the issue of Europe’ Newsnight October 31 2012), they received far less information about the substance of the Lisbon treaty or where the EU budget was spent.

This obviously has major implications for the gaps in public knowledge highlighted by the Electoral Commission report. Fourthly, BBC coverage tends to have a distinct Eurosceptic tinge. This is not because there is any bias on the part of any journalist or the corporation, but because stories tend to be focused on disputes between the UK and Brussels, whilst sourcing is primarily drawn from the major two parties at Westminster, where Conservative Eurosceptics (along with UKIP) have been much more vocal in criticising the EU than pro-EU Labour or Conservative politicians have been at defending it.

It is clear that the patterns in BBC coverage are determined largely by operation of straightforward news values. These are amplified by two further factors. First, the widespread perception amongst journalists that EU news is dry, complicated and of little interest to audiences. Second, an essentially passive and reactive EU public relations strategy that fails to explain how the European institutions operate. This means that unless a story is highly negative, involves a major ‘event’, fits established themes (e.g. cost, sovereignty, immigration) or involves conflict between elite political actors, it is unlikely to be reported. However this makes it difficult to present a full account of the multiplicity of ways in which the EU impacts, for good or ill, on British life. It also means that the audience is denied a rounded debate that isn’t dominated by the two main Westminster parties and the press.

One option to overcome these shortcomings would be for the BBC to take a proactive approach by running a series of stories in mass audience bulletins which examine in detail the various ways in which the UK is affected by its membership of the EU. These could go beyond economic cost-benefit analyses for British businesses and open up debate on a variety of issues such as the challenges of globalisation, data regulation, climate change, national security, employment protection, privatisation, trade and investment policy, tax avoidance and financial regulation.

Such stories could feature a wide variety of civil society actors beyond Westminster, in line with the BBC’s own editorial guidelines that pledge to ‘reflect all significant strands of opinion.’ This would require a firm timetable and a commitment not be sidelined by the daily news agenda. However the BBC is the only public institution with the resources and reach to achieve this. If it doesn’t fulfil this crucial educational role, it is difficult to see who will.

Dr Mike Berry is a Lecturer at Cardiff University School of Journalism, Media and Cultural Studies.