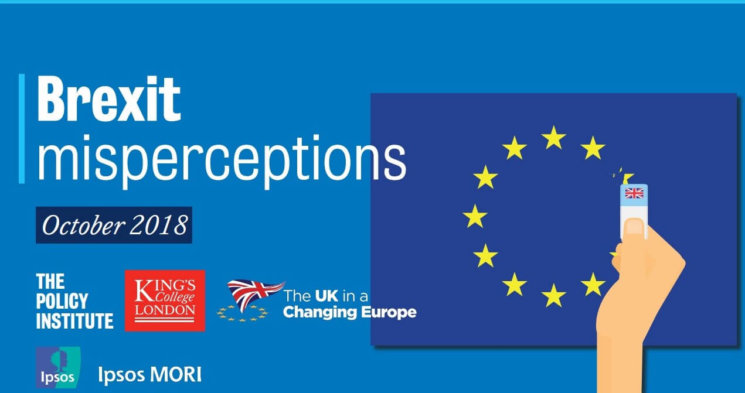 The British public are wrong on key facts around Brexit and the UK’s relationship with the EU, a new study by the Policy Institute at King’s College London, in partnership with Ipsos MORI and the UK in a Changing Europe, finds.

The study takes findings from the recent government-commissioned Migration Advisory Committee (MAC) report and tests these against public perceptions, alongside other facts:

But there are three facts the public are much more accurate on:

“We have had over two years and seemingly endless discussion of our relationship with Europe since the EU referendum – but still the public get a huge amount wrong.

“The best available evidence from a government-commissioned report is that the impact of immigration on our public finances, crime rates and health services is positive or neutral. But the perception among large proportions of the population is that the EU immigration has increased crime, taken money out of the system and decreased the quality of health services.

“These misperceptions are not all about us being misled or our own ignorance of the facts – they are more emotional than that. We exaggerate what we worry about, so what we get wrong is as much a reflection of our concerns. Attempting to change people’s views of Brexit just with a more evidence-based description won’t be enough, and misses a large part of the point. The hugely varied views of these realities lay bare how differently different groups of the population see our relationship with the EU, and how ingrained and difficult it will be to find common ground.”

“The evidence here underlines the scale of the challenge facing those interested in improving public knowledge about, and understanding of, key policy issues. Overcoming misperceptions is a necessary and urgent task, and one that is far more challenging than many assume.”

The original release of the study included the following finding:

It is our practice in all misperception studies to draw on the most up to date available data, as we are interested in perceptions of as current as possible realities. However, net foreign direct investment figures vary significantly year-on-year, and 2016 was particularly unusual.

The ONS notes that “Net flows of FDI into the UK (inward flows) increased from £25.3 billion in 2015 to £145.6 billion in 2016, the largest value recorded since the comparable time series began in 2006. The large value of inward FDI flows recorded were dominated by a handful of high-value M&A deals in 2016; large publicly reported transactions in 2016 included the acquisitions of SAB Miller, ARM Holdings and BG Group.”

It should be noted in this context that in a 2016 study we asked people to estimate the country/region sources of the total stock of c£1,034 billion international investment into the UK, and the average guess for EU countries was 30%, compared with a reality (based on the most up to date data at the time, from 2014) of 48%. So people underestimated that figure too.

However, while again factually correct, more recent level of investment from EU countries, which are likely to be in people’s minds when answering the question, are significantly lower.

We therefore conclude that the most useful and transparent approach is to still report these findings, but with clear qualifications and to suggest caution in their interpretation.