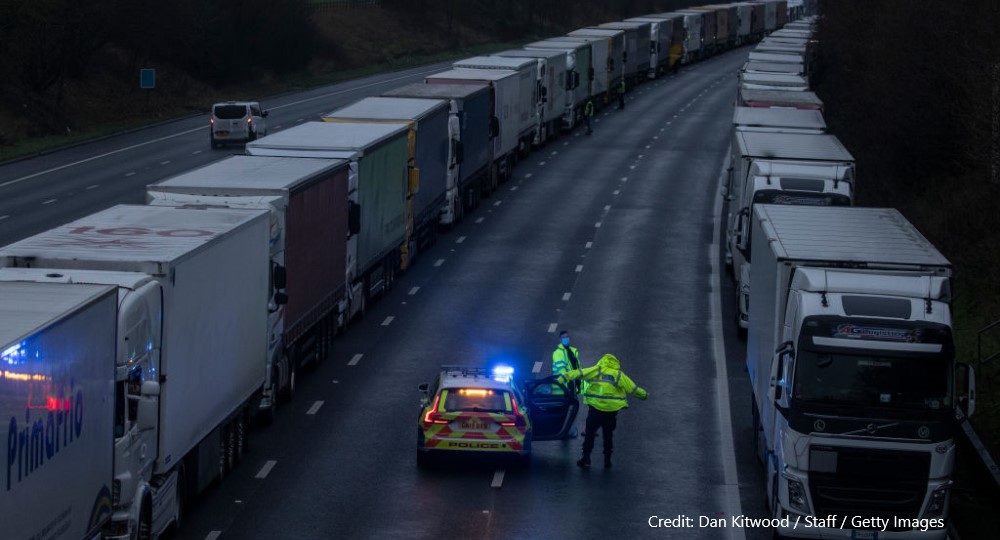 Governments plan for things to go wrong. They hope that by doing that planning they can prevent the worst happening. Back in September, Michael Gove unveiled the government’s reasonable worst-case scenario for Brexit, deal or no deal.

It set out in stark terms the logistical problems that the UK could face if businesses were not sufficiently prepared for new border formalities. It introduced us to the new “Kent Access Permit,” to create an inland border and ensure the functionality of the channel ports. It also, notably, thought a winter Covid spike might actually be helpful, suppressing freight demand.

Last week, with the possibility of tariffs looming on trade between the UK and the EU and the near certainty of border delays, ports around the country started to seize up with pre-deadline stockpiles.

And then a virus mutation forced the government into a handbrake turn on its intention to allow a “merry little Christmas” for the nation. Far from being helpful, the rapid acceleration has thrown planning into disarray.

On Saturday, millions of people were told that it was their plans, not the turkey, that were stuffed, and that they should steel themselves for a grim, lonely day. Not surprisingly, the first reaction of many was to use the eight-hour window to escape from Tier 4, almost certainly guaranteeing the virus’ northward and westward spread.

The EU’s reaction to the news has been to put the UK into a rapid quarantine—with some countries including France banning entry for people and trucks.

The government’s worst-case scenario now looks like a ray of optimism. This is worst case squared. So does the government have any options?

It may be looking immediately to the introduction of focussed testing to persuade the French to reopen the border. That may solve this week’s problem.

Looking further—10 days—ahead, a Brexit trade deal with the EU would improve things.

It would prevent December shortages, if trucks remain shut out, turning into January price rises as tariffs are applied to imports and exports. It would reduce the risk of border disruption if the EU were prepared to show the “pragmatism” on new processes Gove repeatedly calls for—more likely with a deal than without.

A transition extension would improve things even more. That would mean no change on 1st January—and more time for businesses struggling mid-pandemic to get ready for new processes.

There have already been calls for that this morning from Scottish First Minister Nicola Sturgeon, to avoid the government having to fight on two fronts at once.

But there are two problems with that. The easy extension provision in the Withdrawal Agreement expired on 30th June. It is a dead option.

So EU lawyers would have to find some clever way to allow a further extension—Lamberts suggested that might be through a new standstill agreement which could itself be provisionally applied just by agreement of the European Council.

The second problem is the UK government. If it had thought ahead in June and considered the potential, and highly foreseeable, coincidence of the Brexit deadline with a rampant second wave of Covid-19, it might have decided that the prudent course was to extend rather than plough ahead.

But prudence is not the hallmark of the Johnson government. And it knows that any hint of Brexit delay would stir even more disquiet on its backbenches, which are already highly suspicious of the Prime Minister’s moves to manage the virus.

So the government confronts the chaotic potential of a no-deal Brexit compounded by new Covid restrictions, all at a time when the absolute priority should be neither of these: it should be ensuring the rapid and seamless rollout of whatever vaccines the UK regulator has approved to all the most vulnerable groups.

Could it get worse? Well, severe rainfall is forecast for early in the New Year.

By Jill Rutter, senior research fellow, UK in a Changing Europe. This blog was originally published by Prospect.