Referendum day is a long day 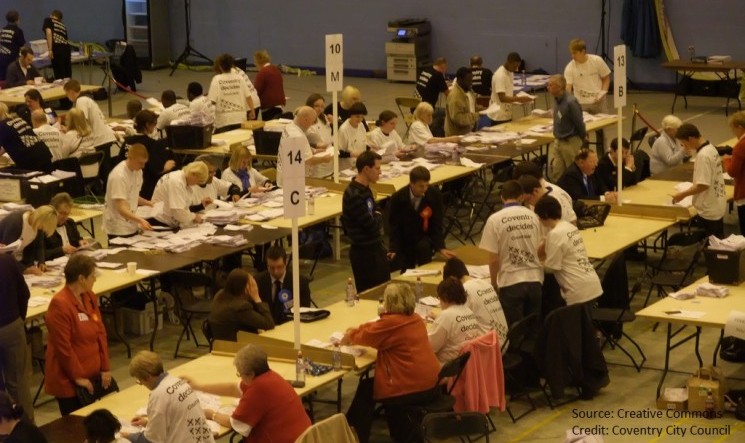 For people who can’t wait for the referendum campaign to be over, postal voting offers quick relief. At last year’s general election, one in six cast a postal ballot. Postal ballots should arrive shortly to those who have requested them. More than a fortnight before polling day millions can endorse Remain, Leave or spoil their ballot by writing ‘Confused’.

While voters can cast a ballot in person at their convenience between 7am and 10pm on 23 June, for officials in the 380 local authorities responsible for issuing ballots, the Referendum began months ago with the annual compilation of the electoral register with almost 45 million names. An accuracy rate of 99.99 per cent leaves room for thousands of publicized complaints from people whose name may be left off in error. On the day, polling station staff must come in early to ensure that they have received the correct ballots and boxes for voters to use.. The bungling of the supply of ballots for local elections in London last month is a reminder of the need to verify and not just trust that everything is in order.

As soon as possible after the polls close, ballot boxes must be taken to the council’s central counting office. The first task is to unfold ballots and set aside the small proportion that can be challenged as invalid by watchful scrutineers of the Remain and Leave sides. Valid ballots must then be counted by hand, because Britain has not yet become so committed to referendums that it would be cost-effective to buy machines to do this infrequently required task.

The one result that counts–the total number of UK votes cast for remaining and leaving the European Union– will require adding up the result of counts declared in hundreds of local authorities in hundreds of places. With votes being tallied in more populous districts than a parliamentary constituency, the first result is not expected until after midnight. It will represent about three-tenths of one per cent of the total United Kingdom vote. With opinion polls predicting a close contest, any early result that shows a big margin for In or Out will appear atypical while a close vote will be inconclusive.

Unlike a parliamentary election, there is no base line for calculating a swing in EU sentiment. Too much has changed since the previous EU referendum in 1975. Hence, the television networks are not sponsoring an exit poll that would provide a forecast of the final result before any ballot is officially counted. Given striking geographical differences in support for the two sides within the South of England, between the North and South of England, and between the four nations of the UK, it will require a large number of local authorities to declare before a pattern can be established that is representative of the United Kingdom as a whole.

Some hedge funds with hundreds of millions to gamble on the financial effects of the referendum are planning to spend £500,000 or more on exclusive private exit polls. Since the result of such a poll cannot be published while voting is under way, a hedge fund can wager eight or nine figure sums during the day in hopes of making millions if their exit poll provides a correct forecast. If it doesn’t, whoever takes the opposite side of the hedge will be that much richer.

Unlike television viewers, who can go to bed in ignorance and learn at breakfast which side won, the Electoral Commission has ordered that the result be declared over night. Its head, Jenny Watson, can only make the official announcement of which side won after the last tally comes in from a remote local authority in Wales or Northern Ireland. Since sun rises at 4.41 am, there is a good chance it will be a Friday morning declaration.

Electoral legislation gives the losing side the right to challenge the count in the courts. In a close fought House of Commons seat, a disputed margin of one-tenth of one per cent could be enough to change the constituency outcome. However, a referendum result that showed 50.5 per cent voting to remain or leave the EU would represent a gap of the order of a quarter-million votes. This would be to big a gap to justify a recount.

If there is a narrow vote to stay in, Brexiteers can continue to challenge the Prime Minister politically. They will demand he bring back from Brussels the major powers that he said he won–or to pass this task to a successor as Prime Minister. If the vote is for Brexit, the shadow of Referendum Day will extend into the autumn of 2018, when a UK application to leave the European Union would probably come into effect.