Referendum or plebiscite: what’s the difference? 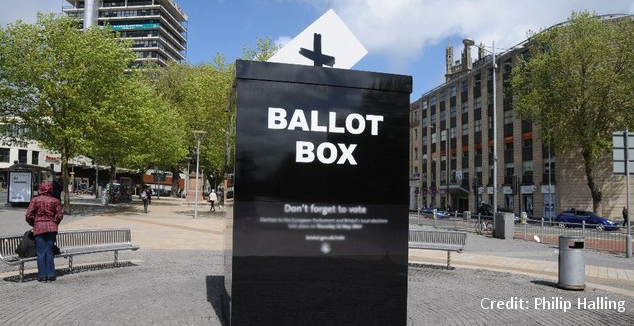 The words referendum and plebiscite refer to electoral institutions in which the mass of the population votes on an issue. However, they have very different political connotations.

Plebiscite is a negative term referring to an unfair and unfree vote in an undemocratic political system. It was a favourite device of French Emperors Napoleon Bonaparte and Louis Napoleon to endorse their charismatic leadership. Hitler and Mussolini held plebiscites in which rejection of the dictator’s proposal was unthinkable.

As a prime minister who holds office with less than 37 percent of the popular vote, David Cameron could hardly be considered charismatic, let alone a dictator.

A referendum, by contrast, is a free, fair and competitive vote. It is democratic if the wording of the question, and the rules governing the campaign, give both proponents and opponents of the issue the ability to compete on fair terms and votes are cast and counted without fraud.

As long as both Yes and No sides have a chance of winning, their chances do not have to be equal.

A referendum campaign, especially one as lengthy regarding Britain’s European Union membership, gives the side that appears behind at the beginning of the campaign a chance to emerge victorious. This point is well understood by those who want Britain to leave the EU.

Since the word plebiscite has undemocratic connotations, it is often used by critics to reject popular consultation, whether fair or unfair. Traditionally, proposals for British referendums were considered inconsistent with the idea of representative parliamentary democracy.

The increase in proposals for referendums has introduced confusion in place of principle. It would be an abuse of rhetoric for critics of the EU referendum to allege that it will be a plebiscite.

However, a Google search shows that the two terms are sometimes used interchangeably in the same story by such media as the BBC, the Financial Times, the Guardian and the Independent.

The many volumes written about the mechanics of conducting referendums show that there is no one best way to conduct a free and fair referendum.

The debate on the EU referendum bill shows differences of opinion among MPs about whether the government’s proposals are equally fair to both sides.

Emotions about EU membership encourage suspicions about what is in and what is left out of the referendum bill. To maximize acceptance by losers as well as winners, the procedures for the vote should be above suspicion.

The amendments offered to the EU referendum bill currently in the House of Commons show that there are differences of opinion among MPs about its conduct.

Backbench Conservative MPs have already protested against regulations allowing Conservative ministers and civil servants to make statements about EU affairs whilst the official campaign is going on.

The SNP has claimed that fairness requires that majorities in all four nations of the United Kingdom should vote No to the EU before the UK government could withdraw from the EU.

This amendment was rejected by the government emphasising that the UK is, for purposes of EU membership, a unitary state. The fairest principle in a referendum is one person, one vote, one value.

The readiness of the government to accept some amendments shows it is prepared to concede that its bill can be improved.

For example, it has accepted that a referendum should not be held on the same date as any other election in any part of the UK.

Since many of the amendments to the bill come from backbench Conservative MPs, the government has less certainty than normal that those it opposes will be rejected.

When the bill moves to the House of Lords, there is more scope for the bill to be amended, since the government is far short of a majority in the Lords.