Reforming ‘free movement’: Does the UK have a point?

Today David Cameron will meet the heads of other EU member states to continue his efforts to renegotiate the UK’s relationship with the EU ahead of Britain’s upcoming referendum on EU membership. The discussion will focus on the UK’s demand to reform the rules for the ‘free movement’ of EU workers, and specifically its proposal to restrict EU workers’ access to in-work benefits and social housing for four years. The recent signs coming out of Brussels are that most or even all other member states are, at present, opposed to this demand. The Government has signalled its potential willingness to compromise as long as other measures can be agreed to help reduce EU labour immigration in the UK.

Why is the British Government so much more concerned about the free movement of workers in the EU than the governments of other EU member states?

There seems to be a popular view, among commentators in both the UK and the rest of the EU, that the UK’s perceived problems with EU immigration and access to welfare benefits for EU workers are simply due to “politics”, “the media” and “ill-informed public opinion on immigration”. While all these factors surely play a role, there are also at least three “structural” factors – the nature of the labour market, the type of welfare state, and social norms on the meaning and boundaries of “citizenship” – that differ across EU countries and can help explain why the UK has taken the lead in demanding reform of free movement. 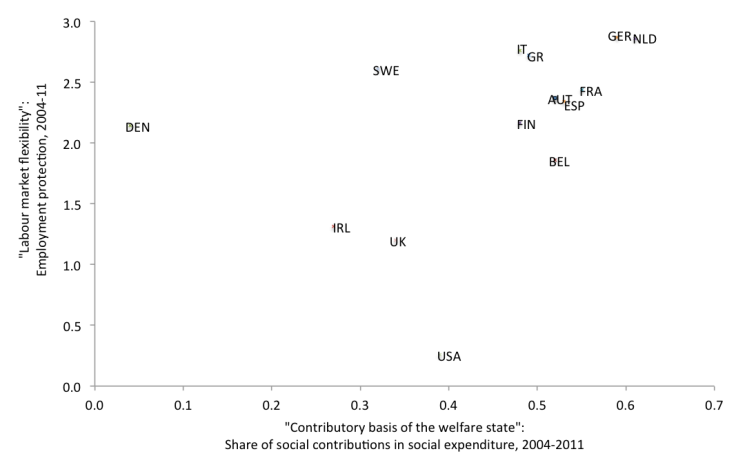 Another reason why immigration can create greater challenges for systems which are less contributory relates to public opinion and perceptions of fairness. One narrow but popular idea of fairness toward migrant workers involves the idea that newcomers should not receive benefits without prior contributions or qualifying period. While all migrants who are working “contribute” through their employment and income taxes, the idea that no benefits should be received without a prior financial contribution or waiting period may be more easily implemented (and communicated to the public) in countries whose welfare states are dominated by social insurance programmes that provide benefits to all people primarily based on prior contribution rather than based on “means”.

Assessing the “contributory basis of a welfare state” is a complex exercise. If we use the share of social contributions in total social expenditure as an (admittedly crude and imperfect) proxy, we find that the UK has one of the least contributory welfare states in the EU (see Figure 1 above).

In countries that have both a relatively flexible labour market and a relatively non-contributory welfare state such as the UK and Ireland free movement can generate specific fiscal costs, economic tensions and concerns about fairness that are not present to the same degree in countries characterised by more regulated labour markets and/or more contributory welfare states. In principle, addressing these tensions and concerns does not necessarily require reducing immigration or migrants’ access to the welfare state. It could instead involve “domestic solutions” such as reducing the flexibility of the labour market and/or making the welfare state more contributory for everybody i.e. including citizens.

Whether the combination of flexible labour markets and less contributory welfare states leads to calls for policy reform in a particular country in practice, and the extent to which domestic solutions to perceived tensions arising from free movement are likely to be politically feasible, critically depends on whose best interests free movement is meant to serve. This is where cross-country differences in social norms on the meaning and boundaries of “citizenship” matter.

If the accepted aim of free movement is to maximize the net-benefits for the EU as a whole, the relatively greater costs incurred from immigration by selected member states, especially those with flexible labour markets and less contributory welfare states, will be less important as these costs will be easily offset by the very large gains that employment abroad generates for EU migrants and their families. I suggest that this may be the policy approach in Ireland where, according to the latest Eurobarometer the majority (57%) of people see themselves as “European” in one way or another (52% say they feel “Irish and European”). Despite its similarity to the UK in terms of labour market flexibility and contributory basis of the welfare state, Ireland has not been an advocate for reforming the current rules for free movement.

If, on the other hand, there are strong domestic political pressures in a country to maximise the net-benefits from free movement for its own citizens the combination of flexible labour markets and less contributory welfare states is more likely to result in domestic political pressures for changing the rules for free movement (and it would probably make it less likely that “domestic solutions” will be acceptable). This is the case in the UK where almost two thirds of people consider themselves as “British only”. The relatively “un-European” identity of British people has been a fairly constant feature for many decades.

These three institutional differences across EU member states – labour markets, welfare states and social norms on the boundaries of “citizenship” – can help explain the UK government’s leading role in calling for reforms to free movement.

By Martin Ruhs, economist at the University of Oxford. This blog is based on Martin’s recent working paper at COMPAS: ‘Is unrestricted immigration compatible with inclusive welfare states? The (un)sustainability of EU exceptionalism’.