Remain or Leave? What the betting markets tell us 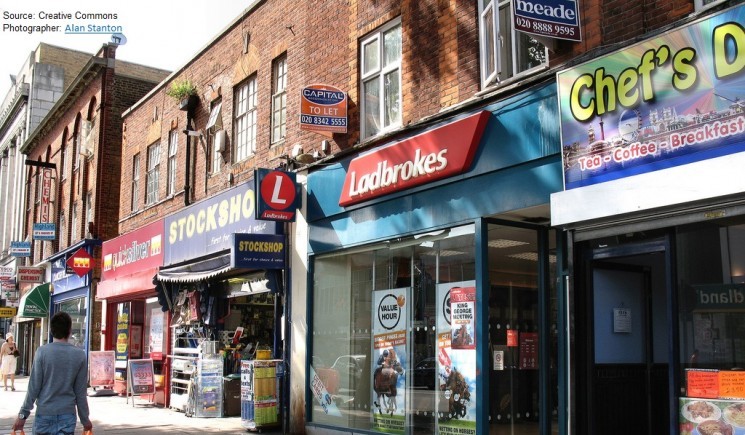 The polls may be close but the latest odds in the betting market point strongly toward a Remain win. Ladbrokes have a current price of 1/3 Remain and 9/4 Leave, implying a 71% probability that Britain will vote to remain in the European Union.

The conclusion of the Prime Minister’s renegotiation in Brussels sparked a frenzy of betting on the outcome (even if there has been no post-renegotiation bounce in the polls). Initially, there was a huge shift towards Remain but this was followed by a shift back to Leave following the news that Boris Johnson had decided to campaign for Leave. Yet as far as the betting markets are concerned -and as shown below it does look like Cameron’s renegotiation has shifted the betting markets in favour of a Remain vote. 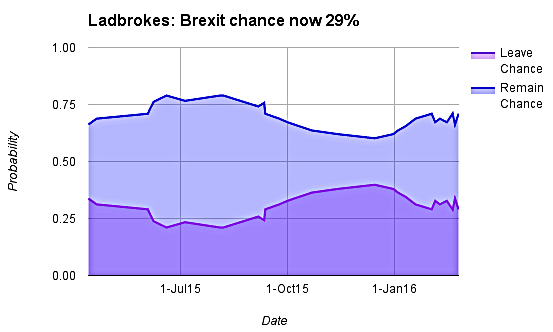 Interestingly, Ladbrokes are witnessing a very similar pattern to the betting ahead of the 2014 referendum in Scotland. Ahead of the EU referendum a majority of bets are for Leave by a margin of 62-38%. But the balance of cash staked is in favour of Remain by a margin of 74-26%. So while there are fewer Remain backers they are willing to stake larger amounts.

We saw the same pattern in Scotland where the ‘No’ vote attracted fewer bets but more money. How can we explain this trend? One possible explanation is that the Remain backers are more savvy ‘investors’ whereas Leave backers are motivated more strongly by a conviction in the justness of their cause.

But do the betting markets have any predictive value in events such as referendums? I’d say that the evidence is mixed. Some financial analysts now see the odds as being a better guide than the polls. The referendum in Scotland seemed a win for the oddsmakers – ‘No’ was always a reasonably clear favourite while the media spun a ‘too close to call’ line.

Ladbrokes’ prices never suggested more than a 27% chance that Scotland would vote to leave the UK, even following the infamous YouGov poll that put Yes ahead before the vote.

The markets probably slightly over estimated UKIP’s performance at the 2015 general election. Thanet South was the biggest betting heat of all 650 constituencies. Nigel Farage was a reasonably strong favourite throughout the campaign before he narrowly lost out to the Conservative Party’s Craig Mackinlay. There were very high volumes of money being staked on some extremely unlikely looking UKIP wins across the country. Wishful thinking and confirmation bias seemed to be especially prevalent among some UKIP backers. If that transfers to the EU referendum then you might expect Remain to become the value bet.

Either way, the indication so far is that Britain’s EU referendum will be a multi-million pound betting event. If you want the latest from the betting markets you can explore Ladbrokes’ live EU Referendum Betting Barometer that will be continually updated between now and the vote. Good luck!

This piece was written by Matthew Shaddick, head of Political Betting at Ladbrokes.