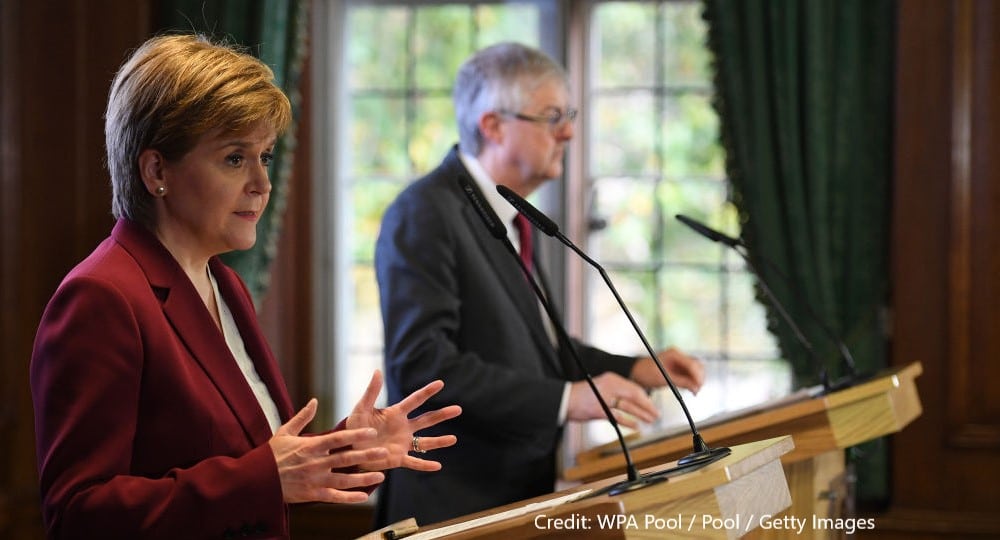 Thomas Horsley explores the impact of the United Kingdom Internal Market Act 2020 on the UK’s devolution arrangements, drawing attention to that Act’s transplantation of EU internal market principles into the UK constitution and its implications for devolved policymaking.

The UK’s exit from the European Union generated a series of new domestic regulatory challenges. One such challenge was how to manage internal trade across the four nations of the UK post-Brexit. During the UK’s membership of the EU, this was largely a non-issue: the EU Treaty framework on the free movement of goods, services, persons and capital provided a set of common rules that bound the UK and devolved administrations.

The United Kingdom Internal Market Act 2020 (UKIMA) addresses the regulatory gap. That Act is heavily modelled on existing EU internal market structures. Indeed, as I argue in a recent open access journal article, the UKIMA effectively ‘transplants’ the basic structures and principles that make up the EU’s internal market into the UK constitution to regulate trade in goods and services within the UK post-Brexit. The parallels between the new UK internal market and its EU counterpart are not exact, but unmistakable nonetheless.

The UKIMA has important implications for devolution. In particular, it disrupts the basic approach to managing the co-existence of different sites of legislative power within the UK. Historically, devolution has followed a ‘devolve and forget’ model, according to which the UK Parliament transferred legislative powers to the devolved administrations to exercise as they see fit and subject only to compliance with specific, predetermined limits (e.g. the requirement to comply with the European Convention on Human Rights under s29(2)(d), Scotland Act 1998).

In a change of approach, the UKIMA establishes the UK internal market as a new shared regulatory space that cuts across the respective competences of the UK and devolved legislatures. Under that Act, the four nations of the UK are brought together in a common regulatory project: the management of a domestic UK internal market. This mirrors the design of the EU internal market, the aim of which is to establish a single European market for goods and services (as well as persons and capital) between the markets of the 27 member states.

What does this mean for the devolved administrations?

The UKIMA imposes significant new practical restraints on the regulatory competences of the devolved legislatures. As before, the Scottish, Welsh and Northern Irish administrations remain free to legislate in areas of devolved competence in accordance with their respective policy preferences. What changes, however, is their ability (prospectively) to impose those preferences on goods and services entering their respective markets from elsewhere in the UK.

This follows from the UKIMA’s introduction of a new set of ‘market access’ principles, which, again, that Act transplants from the EU internal market. In essence, these principles (specifically: mutual recognition and non-discrimination) preclude the devolved administrations from applying regulations that they have enacted within areas of devolved competence to goods and services that are in lawful circulation and/or provided in other parts of the UK. Thus, should the Welsh Senedd legislate (as anticipated) to ban single-use plastics, the UKIMA’s market access principles will, in principle, preclude the application of that ban to products entering the Welsh market from other parts of the UK.

The UKIMA therefore casts a shadow over regulatory autonomy under the existing devolution settlement. The Scottish, Welsh and Northern Irish administrations must now essentially weigh up the advantages of policy innovation against the competitive disadvantages that may result from their inability to apply new legislation to goods and services entering their respective markets from other parts of the UK. As the largest of the four markets economically and geographically, English regulatory choices will inevitably influence decision-making in Cardiff, Edinburgh and Belfast when making such assessments.

The devolved administrations opposed the adoption of the UKIMA. Indeed, the UK government (under Boris Johnson’s premiership) steered that Act through the UK Parliament notwithstanding the Scottish and Welsh parliaments’ refusals to grant legislative consent to the draft Bill. To do so was constitutionally permissible, but exceptional (at least pre-Brexit) and politically contentious.

The Welsh government has subsequently sought judicial review of the UKIMA, arguing that the Act undermines the Senedd’s legislative competences under the Government of Wales Act 2006. Thus far, the High Court, Court of Appeal and, most recently, UK Supreme Court have refused permission to apply for judicial review on the grounds that it would be ‘premature’ to rule on the substance of the application in the absence of specific Senedd legislation. We may expect further legal challenges to the UKIMA, not least if the Welsh government proceeds with its ambition to legislate to ban single-use plastics.

A separate mechanism exists outside the UKIMA to manage future policy divergence within the UK post-Brexit: the Common Frameworks.

The Common Frameworks mechanism predates the UKIMA and, in contrast to the latter Act, was established with the consent of the devolved administrations. Indeed, at the time of its enactment, the Scottish and Welsh governments argued that the UKIMA was unnecessary: regulatory divergence within the UK post-Brexit could be managed consensually through the existing Common Frameworks mechanism (see e.g. Scottish government initial assessment).

How does the UKIMA interact with the Common Frameworks?

The UKIMA recognises the scope for the UK and devolved administrations to reach agreement on Common Frameworks to ensure the free movement of goods and services within the UK internal market. At the same time, however, it also grants the UK government the power to determine whether or not to exempt agreed Common Frameworks from the application of the UKIMA’s market access principles (s10(3) UKIMA). That is an important concession to the UK government, which it may invoke to override intergovernmental agreement on specific policy issues achieved through the Common Frameworks.

In the absence of major policy reversal at Westminster (or transformative intervention by the UK Supreme Court), the contours of the UK’s new domestic internal market are likely to be shaped in large part by the approach of successive UK governments to balancing the application of the market access principles with the (still emerging) Common Frameworks (for more, see Horsley and Hunt).

Under the UKIMA, it is UK government ministers who will principally determine the balance between, on the one hand, the market access principles as deregulatory instruments and, on the other hand, the application of UK-wide common standards agreed with the devolved administrations in Cardiff, Edinburgh and Belfast through the Common Frameworks mechanism.

Wherever the balance is struck, one thing is clear: the UKIMA makes it more difficult for the devolved administrations to pursue regulatory policies that interfere with considerations of economic efficiency. Devolution – and the UK’s territorial constitution – is being reshaped.