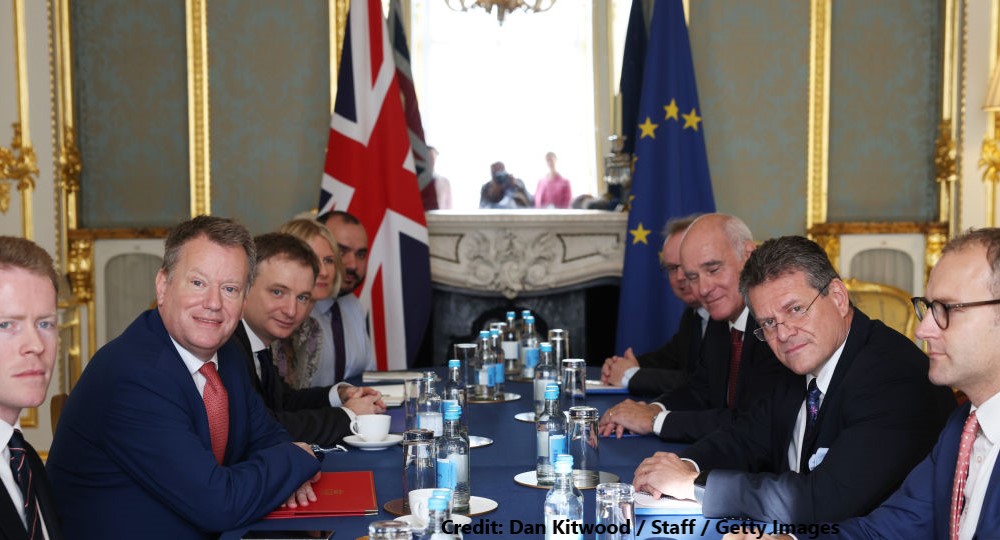 Deep breath, everyone. Lord Frost has returned to the subject of Retained EU law (REUL). Most readers might switch off with just the mention of these three words. But bear with me.  This issue is important for our constitution.

The EU (Withdrawal) Act 2018 (EUWA) provided the framework for ensuring that the UK had a functioning statute book on Brexit day. When the Act was being drafted it was not clear whether the UK would leave the EU with or without a deal and, if the former, how closely the UK would stay in the EU’s orbit.

Three years on, matters are clearer: the UK left with a deal, the Trade and Cooperation Agreement (TCA), which keeps the UK as distant as possible from the EU while still having a trade deal. Frost now wants to revisit the EUWA.

The EUWA is no beauty but the basic idea is simple. To ensure continuity of the legal system before and after Brexit, a ‘snapshot’ was taken of all EU law on Brexit day and converted into UK law. All EU law (except the Charter of Fundamental Rights), together with principles of interpretation (known as ‘general principles of law’) and the pre-Brexit case law of the ECJ, was ‘onshored’ into UK law as ‘retained EU Law’ (REUL) on 31 December 2020.

The EUWA also provided for the supremacy of EU law over pre-Brexit UK law. So an EU Treaty provision, such as Article 157 TFEU on equal pay, trumps conflicting provisions of, for example, the Equality Act 2010. However, after Brexit, Parliament can repeal any court decisions giving precedence to EU law.

Nine months after the EUWA came into effect, Frost announced on 16 September 2021 that ‘we intend to remove the special status of retained EU law’. Last week, Frost returned to the theme. His statement was somewhat lost amid partygate and Omicron. Some of his points are for the techy lawyers; some have broader constitutional implications.

Frost’s first point concerns the direct effect (that is, the enforceability) of unimplemented or incorrectly implemented Directives. The Explanatory Notes to EUWA 2018 suggest a broad reading of the continued direct effect of Directives (para. 98); but Frost says the government may now legislate to ensure a narrow reading so that direct effect applies only in those relatively rare cases when courts, pre-Brexit, had identified a specific provision to be directly effective. Given the UK had a good record for implementing Directives, this change will probably not make a significant difference in practice.

Second, there is consideration as to whether to continue applying EU general principles of law to interpret REUL. Logic, and the snapshot approach, would suggest yes. Frost suggests UK principles of interpretation should apply instead. He’s perhaps trying to reduce the influence of the proportionality principle – fundamental in EU law, but not in UK law – which has favoured the less strict test of reasonableness.

Third, Frost wants to revisit the earlier careful discussion about which UK courts can disapply ECJ case law (currently only the Supreme Court and the Court of Appeal (and their equivalents) can do so), a power used sparingly used so far. Opening the door to other courts doing so will probably mean more ECJ decisions will be rejected, and this may precipitate more (and perhaps opportunistic?) litigation by companies.

Fourth, Frost notes that there are times when the ECJ declares an EU act invalid, and in such cases the UK wants its retained equivalent to be speedily removed from the UK statute book. Yet EUWA removes the right for UK claimants to challenge any REUL on the basis that an EU instrument was invalid.

Frost notes that for some purposes REUL is treated as UK primary legislation and some secondary. He wants to give REUL a ‘more appropriate status within the UK legal system for the purposes of amendment and repeal’. If this means all REUL is downgraded to secondary legislation, making it much easier to repeal, this raises issues about the quality of parliamentary scrutiny of any changes, especially if, as proposed, an ‘accelerated process’ is involved.

Frost then says that new status should reflect the fact that ‘Parliament had no ability to block or amend such legislation once agreed in Brussels – indeed it often had no meaningful democratic scrutiny in the UK at all’. Yet the UK was rarely outvoted in the Council of Ministers, and the lack of UK Parliament scrutiny was a failure by Westminster. Frost now wants the same Westminster to give powers to the executive to amend or repeal REUL quickly. So does under-scrutinised EU law risk being replaced by under-scrutinised UK law?

Frost also says he might propose turning off the principle of supremacy of EU law as found in the 2018 Act. UK legislation, it seems, will trump EU law that pre-dates it. So, would conflicting provisions of the Equality Act 2010 trump the earlier Article 157 TFEU, which was adopted in 1957, amended in 1997, brought into UK law in 1973 but made REUL in 2020? This would ‘take back control’ and remove the last possibility for UK courts to use EU law to strike down conflicting UK law.

Finally, Frost refers to ‘any consequential actions, such as updated guidance relating to the courts … and the place of EU law in legal education’. The last point is provocative. EU law is a compulsory subject to study for ‘professional exemption’ for the Bar. It is surely for the professions, not government, to decide what law students need to know, and for universities to decide what to teach.

Frost’s proposals would make the snapshot less complete. More uncertainty would result for courts already struggling with the complexities of the EUWA while creating incentives for litigation to test the limits of the new regime. In the name of parliamentary sovereignty and taking back control, the executive may gain more power to act without adequate parliamentary scrutiny.

Meanwhile, the government is also reviewing the substance of REUL. No doubt this review will suggest areas for amendment, replacement or repeal but the space for reform is constrained in practice by (1) the level playing field provisions in the TCA; and (2) concerns about regulatory divergence within the UK, particularly given the straitjacket imposed by the Northern Ireland Protocol.

Frost is reshaping the UK constitution, little by little, before our very eyes.

By Catherine Barnard, Deputy Director of UK in a Changing Europe and Professor of European & Employment Law at the University of Cambridge.