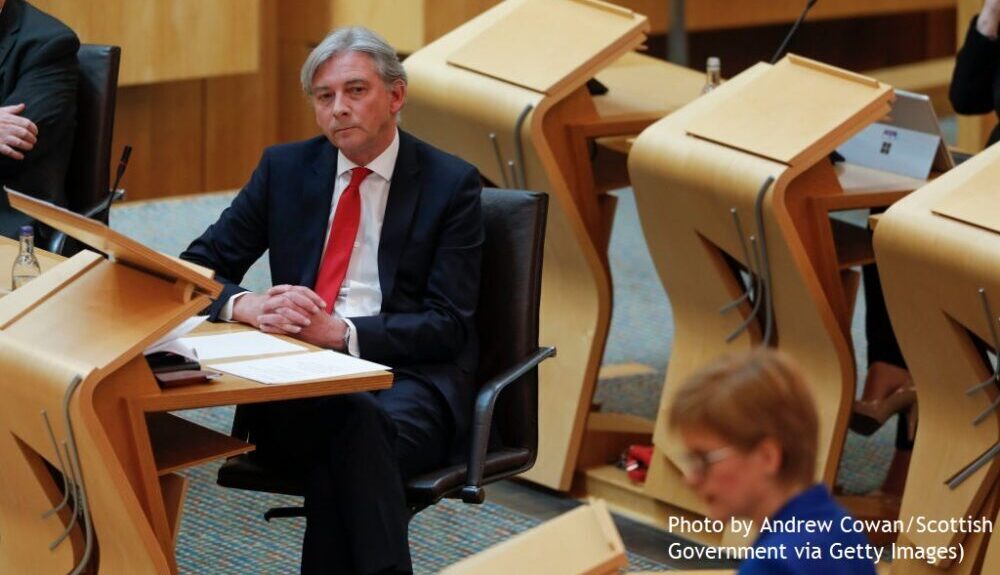 Richard Leonard was elected as Labour’s leader in Scotland in November 2017 with a brief to re-establish his party as a force in Scottish politics.

However, he has been unable to do so. Just as before, Scottish Labour have not threatened the SNP’s monopoly on power.

Instead, it competes, a diminished force, with the Scottish Tories for the scraps from Nicola Sturgeon’s table.

While Leonard’s politics are distinctively socialist, he seemed to represent a useful bridging of Labour’s main factions: the activist left, and the party’s right and centrist wings. Leonard’s socialism emerges from his decades of service to the Scottish trade union movement and his saturation in its culture of labourism.

As a trade unionist and a politician he has gained a reputation as an un-flashy ‘team player’ rather than a charismatic maverick like Corbyn. “Too long in the tooth” to be a Corbynite, in his own expression, but certainly nobody’s Blairite.

As leader, Leonard has sought to orient Labour around an avowedly radical economic agenda, using Scotland’s existing and new devolved powers to facilitate a departure from the UK’s dominant political economic frame.

Under Leonard, Labour has proposed the establishment of a job guarantee scheme, significant tax increases on wealthy citizens and large businesses, and a return to public ownership of Scotland’s railways.

The gambit here was that Scottish voters were tiring of what Leonard has termed the ‘competing nationalisms’ of the Conservatives and SNP, and would be keen to hear about policies which might benefit Scotland’s society, economy, and environment in the here and now. It was further hoped that Leonard’s reputation as an economically literate and detail-oriented figure would lend this push greater credibility.

Perhaps more worryingly, Leonard remains an obscure and ill-defined figure for someone who aspires to national leadership.

Discontent over recent months grew to open displays of disloyalty and a motion of no confidence at the party’s ruling Scottish Executive Committee in September.

Leonard survived, but is undoubtedly further damaged. The underpinning dynamics of the relationship between the Scottish and UK parties here are also in evidence.

The right of Labour look enviously at Keir Starmer’s surprisingly rapid and comprehensive ‘de-Corbynisation’ of the UK party and ask why they should be expected to tolerate such uncompromising socialism.

It may be that Leonard himself lacks the requisite leadership skills, and that a new leader with a different approach is what is required. This possibility is worth consideration: evidently, leadership matters.

One only needs to briefly glance at Labour’s two rivals in Scotland to see that. Ruth Davison’s departure as Scottish Conservative Leader has killed stone dead – to borrow a familiar phrase – any nascent notion that her party could displace the SNP. Nicola Sturgeon’s enduring and growing popularity confirms that individual leadership traits are highly significant in shaping political and electoral outcomes.

Rather, Scottish Labour’s decline is in large part the result of structural shifts beyond their control. Eric Shaw and Gerry Hassan have charted what they term the ‘Strange Death of Labour Scotland’, pointing to structural economic and demographic shifts such as the decline of council housing, the Catholic Church, and the trade unions – all of which sustained the Labour Party’s Scottish hegemony between the mid-20th century and 2010. These in turn represented a deep enmeshment in the fabric of Scotland’s predominantly working class society.

Then came the independence referendum in 2014, which represented a coup de grâce and inserted a wedge between the party and the large number of its traditional supporters who backed independence.

In Scotland, increasingly, to be on the left is to support independence, and unionism and conservatism have become interchangeable in the eyes of many of Labour’s once natural (and now target) voters.

The SNP and the Conservatives both now offer absolute clarity on these key constitutional questions, whereas Labour cannot.

Part of Labour’s left, attuned to these trends, seek a softer line on independence. This, combined with a sincerely held belief in self-determination (for example if Holyrood were to vote to pass paving legislation for another referendum) may prove to be a stronger force than a well-established fealty to the continuation and maintenance of the union.

An unmistakable straw in the wind in this regard was the decision of the influential left-wing group the Campaign for Socialism to support Holyrood’s right to call an independence vote.

Curiously, Leonard has remained relatively inflexible on the core constitutional question, resisting calls from his left for a more independence-curious approach.

Labour’s socialists and affiliated trade unions no longer agree within themselves on the union, never mind with the party as a whole.

Inevitably, this renders any attempts to define the party as the authentic voice of unionism doomed. The same goes for any hypothetical attempt to align the party with vocal calls for another independence referendum, or indeed independence itself. Attempts to shift the conversation elsewhere are not bearing fruit.

Labour still aspires to, but can no longer claim to speak for the working classes of Scotland. At a time when many of Leonard’s core presumptions about inequality and social justice have been proven correct, and when mainstream media discourse has again become more accepting of the notion of class injustice, that is damning.

Another change in leadership, though, is unlikely to herald better results. But we also exist in a highly volatile political environment – one where a former First Minister can be tried for rape and an SNP which has demanded to be judged on its record on education outcomes can oversee a humiliating national scandal on school exam results without any commensurate impact on their national standing.

Despite that bad publicity, the UK government’s catastrophic response to the Covid-19 pandemic has further solidified the position of sensible and sober Nicola, who strikes a favourable contrast with the Prime Minister, and nudged support for independence to its highest levels yet recorded.

Labour’s strategic approach under Leonard may be the only one open to it within those defining constitutional and political constraints. It is one that is unlikely to survive under a leader – whatever their relevant skills – drawn from the party’s recidivist and unionist right.

By Dr Sean Kippin, Lecturer in Public Policy at the University of Stirling.