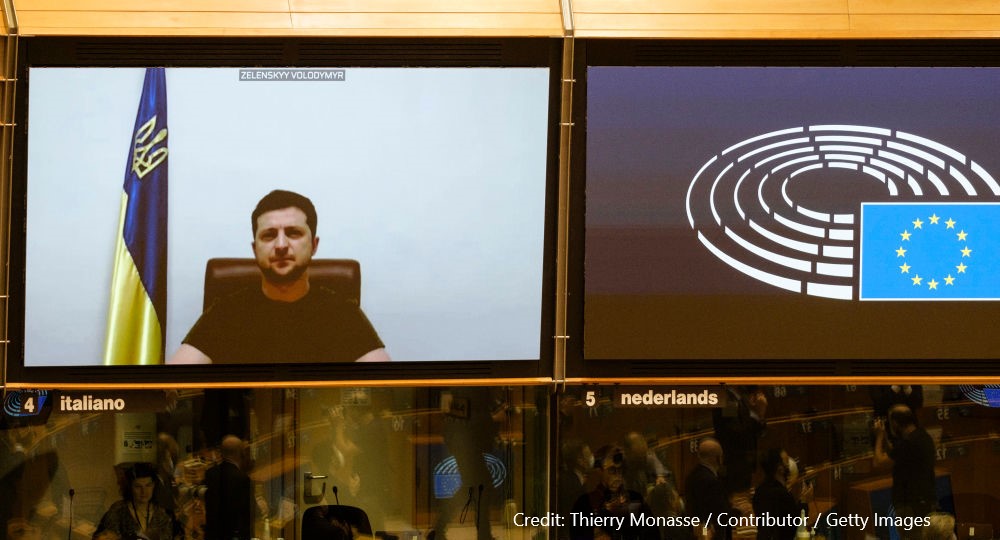 In the weeks leading up to Russia’s invasion of Ukraine, President Zelensky, the inclusive populist president who had been flagging in the polls for some time, espoused mixed messages. In discussing Russia and Ukraine, he warned the foreign media that Russia may occupy Kharkhiv, while domestically urging citizens to be calm and plan barbeques in May.

Some saw this as an attempt to stem the disastrous effect Russian aggression was already having on the Ukrainian economy, which was still struggling with Covid, and others as a sign of his weak leadership and failure to have a coherent strategy for dealing with Russia.

The prosecutor was trying to arrest Zelensky’s main political rival, the previous president Petro Poroshenko, in a case that was widely seen as politically motivated and as rather a poor sign of Zelensky’s democratic commitment – particularly as this took place against the backdrop of continued stalling and sabotage of desperately needed judicial reforms.

Unsurprisingly then, there was limited confidence in Zelensky’s ability to lead the country in such dangerous times, and trust in other state institutions also remained catastrophically low. In private conversations, friends in Kyiv worried that key elites would simply flee abroad.

I tried to reassure them that at least the new Minister of Defence and Commander-in-Chief seemed competent and committed, and that (despite some stalled reforms) the armed forces were in better shape than ever. But privately I worried about Zelensky, his team, and about his parliamentary majority: would they even stick around?

First, we should admit that Ukraine is not a consolidated democracy, it is a hybrid regime where democratic institutions are often subverted by so-called ‘informal practices’ (patronage, clientelism, nepotism etc). And yet, we should be sure to put this in the proper perspective.

Here a brief comparison with Russia is instructive. Although both Russia and Ukraine have pronounced neo-patrimonial features, where informal practices such as clientelism trump formal institutions, there is a significant contrast between the two political regimes and it is important to understand that their trajectories have increasingly diverged over time.

Ukraine has remained a highly competitive hybrid regime where incumbents generally lose elections (and attempts to steal them are successfully resisted), whereas Russia has not experienced a single democratic change of power in its history.

Since 2014, Ukraine has successfully decentralised power to the local level; civil society is diverse, vibrant and has stepped in where the state was struggling; the opposition and media remain diverse, vocally critical; and social tolerance of difference is improving.

In contrast, in Russia authoritarianism was consolidated especially after Putin’s return to the presidency in 2012. Hyper-centralisation was intensified, the political space was progressively closed and state narratives are increasingly nationalist. This tendency has only intensified over time, with examples too numerous to mention.

Ukrainian pluralism, for all its flaws, and the repeated and growing willingness of Ukrainians to stand up for general European values, were perhaps perceived by the Kremlin as the greatest threat of all.

On St. Valentine’s Day this year, Zelensky addressed the nation. In a sombre suit in front of the flag and state emblem, he reassured Ukrainians that the government was preparing for all eventualities and the army was much stronger and more experienced than when Russia invaded the Donbas and occupied Crimea in 2014.

As war drew closer, he consistently reiterated Ukraine’s commitment to peace and negotiations, but also to stand firm in the face of Russia’s demands and false accusations. Zelensky’s public pronouncements carefully reflected Ukrainians’ perspectives on how to face Russian aggression, where the overwhelming majority ruled out any concessions on territorial sovereignty or integrity, such as opting for neutral status or recognising Crimea as Russian.

In mid-February well-known Ukrainian oligarchs returned from abroad after presidential urging, and, perhaps even more incredibly, parliament sat and adopted legislation with massive majorities not only to prepare for the expected military challenge and national emergency, but also found time to move towards stalled reforms to civil-military relations in line with NATO norms.

It was little noticed, but this was clear sign: there was an elite consensus that there no way back from Ukraine’s Euro-Atlantic aspirations.

As the full-scale invasion began, Zelensky addressed the nation daily in a khaki t-shirt, self-confident and ready for action, seeking to embody the armed forces’ performance and mass civic resistance. President Zelensky had previously shown limited interest in military matters and reforms. But his media background turned out to be a wartime asset.

There were memorable soundbites (‘I need ammo, not a ride’), macho memes and jokes about ‘iron balls’ enthusiastically shared by Ukrainians (and not only Ukrainians) on social media.

Ratings followed – by the beginning of March, an incredible 98% supported the army, 93% the president and 84% local governors. This was matched by high levels of optimism and confidence in Ukraine’s victory in the war.

Even critics gave Zelensky their support and old political foes buried the hatchet. You might say that all this is to be expected in wartime, and there is nothing surprising here – it’s the ‘rally round the flag’ effect.

But this is not some distant foreign military adventure (like, say, the UK’s Falklands War, which resurrected Margaret Thatcher’s career) but a real, present threat to life with daily air-raid sirens, shelling, destruction, injury, deaths and omnipresent danger.

Yet officials and parliamentarians, long considered vain, corrupt and self-serving by a majority of Ukrainians, are staying and doing their job, facing these threats, probably on some ‘kill list’. And the Ukrainian state, which Russia tried for so long to present as failing and illegitimate, is demonstrating real capacity.

By Dr Sarah Whitmore, Reader in Politics at Oxford Brookes University. She has published peer-reviewed research on Ukrainian and Russian domestic politics, including State-Building in Ukraine: The Ukrainian Parliament, 1990-2003 (Routledge, 2004). Her current research (together with Professor Bettina Renz, University of Nottingham) on military reform in Ukraine is funded by the British Academy.