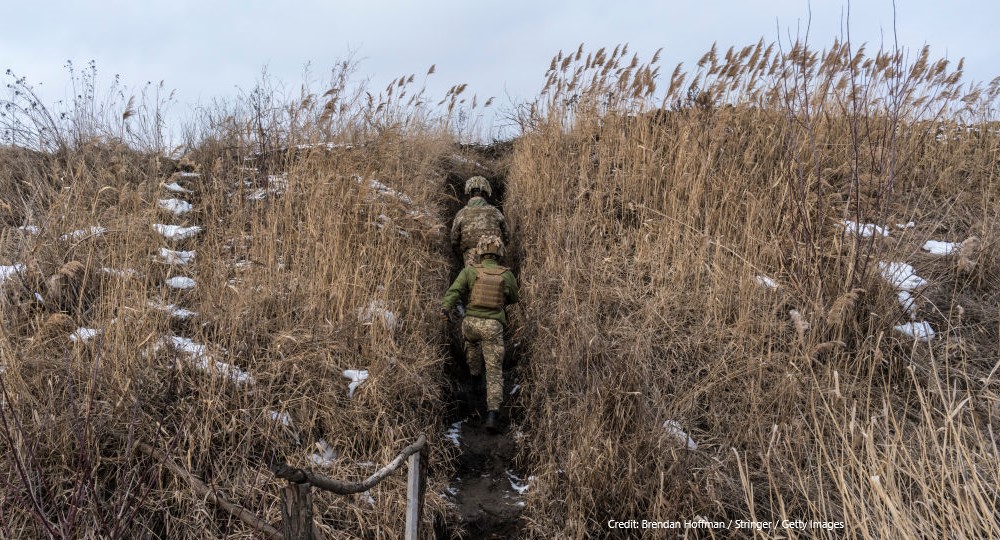 One should be in no doubt – if Russia attacks Ukraine, the West (led by the US and allied under NATO’s umbrella) will not fight and die for Ukraine’s defence. The reasons for this are obvious. Governments and the public across the alliance lack the stomach for war. The US and the UK, following the debacles of Iraq and Afghanistan, will avoid putting their troops in harm’s way at all costs.

And looming over this is a simple, brute fact: Russia enjoys local military superiority. The price of coming to Ukraine’s defence would be a dangerous journey up the ladder of escalation, with a NATO defeat pinned to the top rung.

The idea that the US and its European allies would ever undertake such a mission is, therefore, fanciful. Indeed, it has been expressly ruled out by the NATO Secretary General Jen Stoltenberg and US President Biden.

But if a counter-intervention is off the table, measures short of war seemingly are not.

Ukraine, while not a member of NATO, has for many years been treated as a quasi-ally of the West. The US and the UK have been major suppliers of arms and training since the 2014 Crimea crisis. In response to the current Russian mobilisation, both the UK and the US have promised to send more weapons. NATO ally Turkey, meanwhile, has already supplied Ukraine with anti-tank drones, reportedly used to decisive effect against Russian-backed separatists in the occupied Donbas.

The allies have also provided Ukraine with muscular assurances of support. President Biden’s Press Secretary, Jen Psaki, suggested on 19 January that a Russian incursion would be ‘met with a swift, severe, and united response from the United States and our allies.’ Stoltenberg has referred to ‘severe consequences’ in the shape of economic, financial and political sanctions.

But will the tough talking produce results?  It may well be the case that allied resolve evaporates in the face of a Russian onslaught. Lines of division have already opened up: President Macron is unhappy with US leadership on Ukraine and has called for a separate EU-Russia security dialogue; the new coalition government in Germany has ruled out sending any arms to Ukraine and has blocked efforts by Kiev to purchase small arms through the NATO Support and Procurement Agency.

And even if the West can hold its nerve, it is uncertain that any of the threatened measures will deter Russia. Moscow could simply call NATO’s bluff, knowing the allied response will be fractured, inadequate and unsustainable. Threats may also prove counter-productive, simply fuelling suspicions in the Kremlin that NATO harbours an ambition to integrate Ukraine into an alliance system from which it is permanently excluded.

In that light, what is to be done? It makes a lot of sense for NATO to beef up its support of the eastern allies, the Baltic States in particular. The Alliance did this to great effect after the 2014 Crimea crisis, so deterring Moscow from extending its destabilisation further into Europe. Military aid flowing into Ukraine also has a clear logic. Its deployment in the field by the Ukrainian military will ‘punish’ Moscow for any escalation of violence. The Russian armed forces and its proxies will find occupation a grinding experience and the Kremlin will think twice about any future manoeuvres.

But these measures must run in parallel with a diplomatic track that is both ambitious and conducted at the highest levels. Since the 1990s, European security has been stripped of the mechanisms of East-West dialogue. It would take volumes of analysis to apportion blame for this sorry state of affairs. Russian grievances over NATO enlargement and Balkan interventions have been matched by complaints in western capitals at Russia’s attacks on Georgia (as well as Ukraine), the propping up unsavoury dictatorships in Belarus and Kazakhstan and, of course, Russia’s malign interference in American domestic politics and the assassination of Russian exiles on British soil.

One silver lining of the current crisis has been the animation of previously marginalised diplomatic fora – such as the NATO-Russia Council and the US-Russia Strategic Stability Dialogue. The Organisation for Security and Cooperation in Europe (OSCE), meanwhile, has found itself at the centre of a debate on how to repair pan-European dialogue and fashion disarmament, transparency and confidence building measures.

Of course, talks have their limits. In December, Russia published two draft security treaties (one with the US and one with NATO). Their provisions were a simplistic rehash of earlier demands: that NATO desist from future enlargement and that allies who had joined NATO after 1997, in effect, disarm. These conditions appeared designed to be rejected. Russian Foreign Minister Sergei Lavrov himself gave the game away when he noted that in the absence of ‘a constructive response’ Russia would be forced to take the actions necessary to ‘eliminate unacceptable threats to our security.’

Such cynicism would seem to confirm the view that crisis diplomacy is but a screen behind which Russia is making final preparations for war. An intense week-long round of negotiations in mid-January saw Russia talking to the US and NATO, and Ukraine the main subject of a meeting of the OSCE. But these efforts ended in stalemate. Upon their conclusion, Defence Secretary Ben Wallace warned of a possible ‘multi-axis invasion of Ukraine.’

Wallace is right to be worried, but his pessimism may be overdone. The Russian armed forces are certainly capable of a full-frontal invasion but such action would come at a heavy price. Ukraine is now better prepared to resist Russia than it has ever been. Sensing Ukraine has the backbone for the fight, Moscow itself may be seeking a diplomatic offramp.

The Kremlin’s preference is to exploit direct channels to the US (hence, the Geneva meeting on 21 January between Lavrov and Secretary of State Anthony Blinkin). But sooner rather than later Russia will need to eat humble pie and talk to Ukraine. To date, the Minsk Process and the Normandy Format (which also includes France and Germany) have proven ineffectual in this regard. Proximity talks brokered by the US (of the sort which gave rise to the Dayton Accords on Bosnia or the Angola/Namibia settlement in 1988) are an alternative. Putin will see a get together with Ukraine’s President Volodymyr Zelensky as something of a humiliation, but if it also means sitting at the same table as President Biden to sign off on a deal, that affront might be more palatable.

By Mark Webber, Professor of International Politics, University of Birmingham.