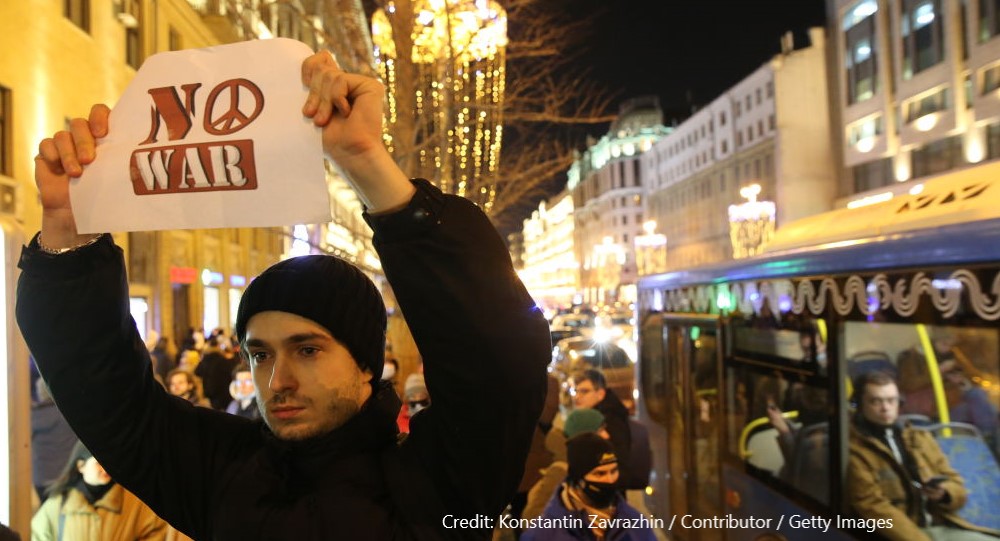 Do Russians really support the war in Ukraine? Do they blindly believe Putin’s propaganda? Answering these questions is difficult. Public opinion polls from Russia cannot necessarily be trusted – they are likely to overstate the percentage of the population in support of the Russian government’s actions.

What the polls do show is that the Russian population is divided, meaning we cannot generalize about Russians as a whole. Instead, this article highlights how different groups in the population are affected by the propaganda.

We can first distinguish between ‘producers’ and ‘consumers’ of propaganda. The former include Putin and his entourage, loyal elites and media producers – those who have access to a lot of information but choose instead to tell lies that suit their political project.

The ‘consumers’ of propaganda include, in the first place, people who only use media loyal to the Russian state. Many elderly people in Russia, particularly those living outside major urban areas, use TV as their main or only source of information, and Russian TV news have been dominated by state propaganda organisations for years. People in this position are likely to believe what they see, and even if they adopt a critical stance, have little alternative information to draw on.

These are not the only consumers of propaganda in Russia, however. In fact, everyone is exposed to it: propaganda is communicated not only via legacy media such as TV, radio, and newspapers, but also via social media, educational institutions, parades and celebrations. Even if you do access alternative information, the constant repetition of certain messages across media makes you more likely to believe them.

Russian propaganda stories on Ukraine support an overall message that a ‘fascist’ threat has spread across Ukraine and into its government, supported and orchestrated by the West. This narrative is not new – it has been told at least since 2014, starting with the Maidan movement, the annexation of Crimea and the ongoing war in the Donbas. Russian history writing portrays Russia as a heroic fighter opposing Nazism and the West, and it is easy to connect these threads and advance a narrative that Russia should ‘liberate’ Ukraine.

There are, of course, those who consume alternative media but do not believe them. They may dismiss independent or Western news reports as propaganda, or as misinformed. They may also find it difficult to make sense of alternative explanations which do not resonate with what they think they know about the situation.

For instance, imagine you think Russian soldiers are in Ukraine to liberate the population from Nazism, and you then read an article which claims Russians are killing civilians. You might explain this to yourself as anti-Russian propaganda, or figure the journalist is misinformed and the people killed were Nazis or soldiers in disguise. Russian propaganda encourages such interpretations by regularly ‘de-bunking’ Western reporting with their own fake news.

Even for people who take a more critical stance to Russian propaganda narratives, they have an impact. In 2016, I conducted interviews with Moscow university students who were fluent in either English or German, and who often used international media in these languages. Many of them were acutely aware of the differences in reporting between Russian and Western media. Realizing that a lot of media stories are fabricated led them to adopt an extremely critical stance towards all news, no matter the origin.

Their belief that all media are lying lead to two reactions, both of which are problematic. The first was to disengage from politics. This suits the Russian leadership as disengaged citizens are unlikely to put up any resistance. Depoliticized people also do not typically hold coherent opinions, and can believe contradictory accounts without noticing their incompatibility.

The second reaction was to instead try to find out about developments from ‘private individuals’ without a political agenda, for instance, via social media. However, a single individual’s opinion is unlikely to be representative of the wider population, and Russian propaganda plays to this trend by creating fake social media accounts, eyewitness videos, and so on.

It is thus extremely difficult to escape the influence of propaganda in Russia. Nonetheless, some people resist depoliticization and propaganda, and define themselves in opposition to the Russian government. Their lives have become a lot harder since the Russian invasion of Ukraine. The most important independent news media have had to stop their operations due to tightened censorship.

Russia has also blocked websites such as Facebook, Twitter, BBC News, as well as Ukrainian and independent Russian news sites. Posting something as simple as ‘No to the war’, or running reports which build on independent research, can lead to arrest and imprisonment.

This makes it difficult to access independent information, and dangerous to spread information or protest. The immediate future may therefore see more Russians consuming propaganda as their only news, and others stopping to speak out. It is difficult for people in democracies to understand the pressure Russians are under. There is not only the fear of arrest, but also the fear of what might happen to their children if they were to lose their income or freedom, and the well-meaning concern of their social surroundings who implore them to keep their head down.

The people who do speak out, however, while they are a small group, are a vital force. Over time, they may garner the support of people turning against the government for other reasons: the economic hardship brought about by the sanctions (even if propaganda blames the sanctions on the West rather than connecting them to Russian actions); the blocking of social media; families of returned or fallen soldiers; families of Ukrainians (there is a lot of migration and intermarriage between the two countries).

And, perhaps, other countries finally learn to better deal with Russian propaganda. So far, Western efforts at countering it have been disappointing. Post-facto corrections and myth busting are unlikely to be successful in changing opinions.

By contrast, Ukrainian President Zelenskyy has won the internet with his dramatic video appeals. They show that using emotional narratives which resonate with their audience can work for both sides. There is a danger in adopting these methods that a convincing narrative becomes more important than telling the truth. But they also show the information war is not over yet.

By Dr Maren Rohe, Research Fellow at the University of Birmingham.