Scotland and Europe after the election 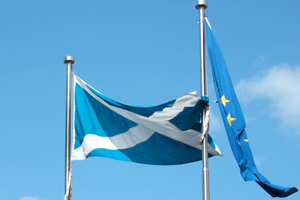 The two are connected inextricably since, partly as a result of the electoral system, the representation of Scotland and England in Westminster has polarized. There is no longer a British party system – the Conservatives speak for England and the SNP for Scotland.

The SNP has adopted a strongly pro-European position and sees no need for renegotiation but is powerless to stop it. There has been much speculation on what would happen if England voted to leave the EU and Scotland to stay in. This is no more than a possibility, since English opinion seems against exit, while Scottish public opinion is by no means as Europhile as some pronouncements would suggest. On the other hand, all the political parties in Scotland, business and trade unions, the voluntary sector and civil society in general are pro-Europe, suggesting that the campaign in Scotland would take on a distinct form.

Scotland has completely changed in recent years as a political community, and Europe is an essential part of the framework. UKIP has only a single elected representative in Scotland and during the general election campaign adopted an explicitly anti-Scottish stance focused on funding issues.

Before we reach that pass, however, there are the negotiations. Whatever the agenda (and this remains unclear) it is likely to cover both devolved and reserved issues.

The devolved administrations have a role in day-to-day policy making in the EU by participating (by invitation) in the Council of Ministers and the preliminary work for it. This has sometimes worked well but also, badly. There was almost no Scottish involvement in the decision on opting out and in to the provisions on Justice and Home Affairs, many of which are the competence of the Scottish Parliament.

It is not at all clear what the role of the Scottish Government (and other devolved administrations) will be in the coming negotiations.

It has become a constitutional convention that the approval of the devolved legislatures is needed for any change in their powers but this has not been tested in relation to Europe.

There may be differences in preferences and priorities. Successive Labour-Liberal Democrat and SNP Scottish administrations have supported a more liberal migration policy than the present UK Government or the UK Labour Party in the general election; the SNP continues to support the free movement of labour. The SNP has supported the vision of ‘social Europe’, which the Conservatives reject. They do not favour the repatriation of cohesion policy –EU’s main investment programme designed to reduce the economic, social and territorial disparities of member states. Alex Salmond, as SNP spokesperson on foreign and European matters in the House of Commons, has already begun to develop a distinct line on the renegotiation. If David Cameron does need Opposition votes to over-ride his Eurosceptic backbenchers, he may find himself doing business not just with Labour but with the SNP.