Scotland and the Brexit endgame 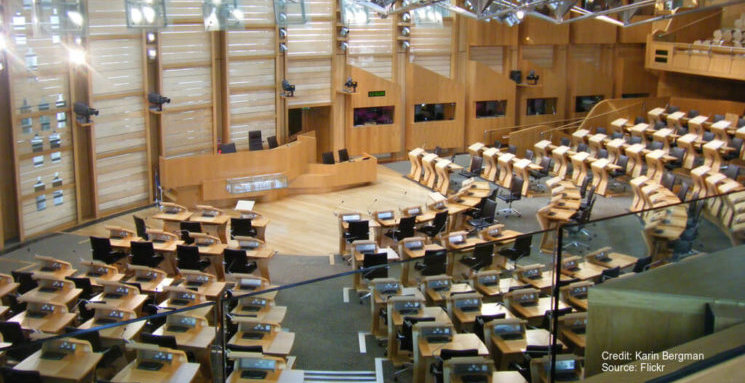 As the deadline looms for a Brexit deal, Scottish public opinion remains staunchly pro ‘remain’ and is, too, strongly in favour of a ‘people’s vote’. But Scotland’s political parties continue to differ sharply on whether Brexit can and should still be halted and what sort of Brexit the UK should aim for.

How this will play into UK Brexit politics and into future constitutional divisions – over both devolution and independence – is an open but vital question.

The Scottish National Party’s 35 MPs make it the third largest party at Westminster and they could be key in the various Commons votes to come.

Compared to a few months ago, the SNP stance on Brexit is now sharper and more pro-active: at the conference a month ago, party leader and Scotland’s First Minister, Nicola Sturgeon, announced the SNP would support any vote in the Commons calling for a further EU referendum, as long as it had a ‘remain’ option on the ballot paper.

Until then, the SNP had said it wouldn’t block such a vote but wanted guarantees or acknowledgement of Scotland’s special position if England and Wales voted ‘leave’ again.

This left open a question of whether SNP MPs might abstain on such a vote. So this policy shift is significant and would be more so if Labour ended their fudge on the question and also backed a second referendum.

Despite some internal divisions within the SNP (some worried that a vote on the Brexit deal could set a precedent after a successful future independence vote), this policy stance looks set to stand firm.

On 7th November, MSPs at Holyrood voted 65 to 30 for a Lib Dem amendment supporting a ‘people’s vote’ with almost all SNP and Green MSPs voting with the LibDems.

The Tories voted against and Labour abstained (though former leader Kezia Dugdale voted in favour). It was a significant vote and a neat summary of current party positions in Scotland.

SNP MPs are also expected to vote against any deal May brings back from Brussels – unless it entails full membership of the EU’s customs union and single market (not currently expected).

So the SNP and Scotland’s four Lib Dem MPs are broadly in the same place on Brexit (despite their stark differences on independence), as are the pro-independence Scottish Greens, who have seats at Holyrood but not Westminster.

But most Labour MPs in Scotland remain, for now, firmly behind Corybn’s pro-Brexit stance (though likely to vote against a May deal – unless a permanent customs union is on the table).

This is despite polls showing almost two-thirds of Scottish voters back ‘remain’ and a similar number back a further referendum, with support for another vote across every Scottish constituency – and higher support from Labour voters for both.

Only two of Labour’s seven Scottish MPs, Ian Murray and Martin Whtifield, have so far come out clearly for another referendum.

Meanwhile, Scotland’s Conservative MPs are pro-Brexit, emphasising freedom from the EU’s common fisheries policy, and insisting that Northern Ireland should not have any differentiated deal. This latter position is driven, in particular, by their concern not to set any precedent for Scotland.

The Scottish government – backed last year by Labour and Green MSPs – has demanded that Scotland should stay in the EU’s single market even if the rest of the UK does not. The Scottish Tories see this as the thin end of the wedge in terms of independence.

Scotland’s strong pro-remain views are, then, currently mainly reflected at Westminster through the SNP (and the four Lib Dem MPs). Scottish Labour or Tory leaders could, in the last year, have potentially impacted strongly onto UK political dynamics around Brexit if they had spoken out for a ‘people’s vote’ or for a ‘soft’ Brexit.

But they chose not to.

Scottish public opinion on Brexit cuts firmly across the pro- and anti-independence divide – large majorities of SNP, Green, Labour and Lib Dem voters all still back ‘remain’ (although pro-independence voters are now somewhat more pro-remain according to some polls).

But in terms of party politics, there is a polarisation between Brexit-supporting and unionist Scottish Tory and Labour versus pro-remain SNP and Greens. Only the LibDems buck this polarisation trend, being anti-Brexit and pro-union.

But a recent poll for the SNP suggested that if Brexit goes ahead this could increase to 50%, or even to 52% in the case of a ‘no deal’ Brexit.

Nicola Sturgeon said a year ago, after her abortive call for a second independence referendum in March 2017, that she would set out her views on the route to another independence vote this autumn once Brexit was clearer.

But given her recent comments on a likely ‘blind’ Brexit, whether she will set out clear timing on another independence vote, once a Brexit deal is done, is itself uncertain.

Many expect caution from Sturgeon on the timing of any new independence vote, not least as May could repeat her ‘no, not now’ riposte of March 2017 – doubtless encouraged by Scottish Tories.

But if a Brexit deal is done and does pass at Westminster, and the UK leaves the EU on 29 March 2019, the impact on Scottish public opinion, and on Scottish political dynamics, could be greater than some now anticipate.

The chaotic Brexit politics of the last two years has also left devolution weakened and Holyrood in many ways side-lined. Put that together with a Brexit deal clearing the Commons, and Scottish debates on independence are likely to intensify.

Many pro-independence voices will still argue for caution, reflecting the strongly held view that if a second independence vote is lost then there won’t be another for a long time.

But others argue the SNP should push for another vote while it still has a majority, with the Greens, at Holyrood (with the next elections due in 2021) – though there are no clear answers on how to overcome another May ‘no, not now’ refusal.

Meanwhile, Scottish Labour leader Richard Leonard has insisted that UK Labour will put its opposition to another independence vote into its next manifesto (although John McDonnell last week refused to confirm that while reiterating Labour’s opposition to independence).

And Ruth Davidson has said there shouldn’t be another independence vote, at least not until after 2027.

Whatever happens to the dynamics of the independence debate next, if Brexit goes ahead then the sense of alienation in Scotland from the disruptive and damaging process of Brexit will surely grow.

UK politics is effectively consumed by English divisions over Brexit, divisions which will not disappear when and if Brexit happens. And, given Scotland’s pro-EU outlook, Scotland’s simmering constitutional and political disconnect to the rest of the UK will surely continue too.

By Dr Kirsty Hughes, director of the Scottish Centre on European Relations.