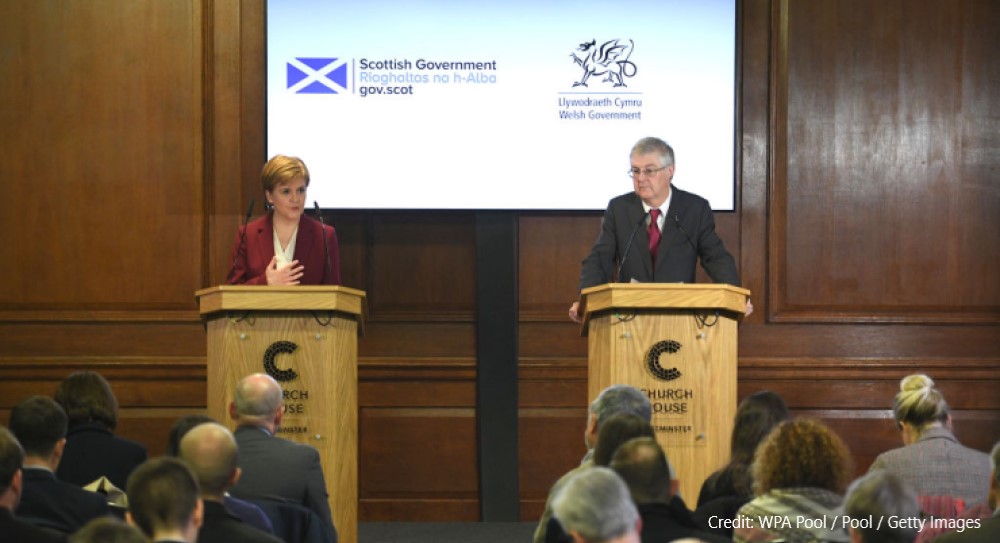 The UK officially left the EU in January 2020 but it currently remains within the framework of EU rules. This “transition period” finishes at the end of 2020.

Although the UK has already left, the dilemma of deal or no deal has reappeared. The UK government’s negotiations with the EU about what should follow are fraught. Equally, though, its Brexit policy has made London’s relations with Cardiff and Edinburgh worse than they have ever been.

Deal or no deal, in 2021 Brexit will confront the Scottish and Welsh governments with difficult new policy challenges.

Their biggest challenge, though, may not come directly from the outcome of the UK-EU negotiations. It could come from internal changes to the structure of devolution through the new UK Internal Market framework that is being created at Westminster.

The devolved governments are frustrated observers of the UK-EU negotiations. They would prefer to stay as close as possible to the EU – a position which differs sharply from the Johnson administration, which wants an ordinary “third-country” trading relation with the EU.

Third-country status confronts the devolved governments with difficult choices. Ending transition without a future relationship deal would make them even harder.

Without an agreement, for example, high EU tariffs could kick in for agriculture.

But some agricultural products – beef, dairy, pork and poultry – could benefit from reduced competition from the EU, with UK consumers substituting domestic for EU produce. Whereas the UK is a net exporter of lamb, so producer prices for sheep are likely to fall.

This pattern hits Scotland and Wales harder than England. Economically vulnerable upland sheep farming is an anchor activity in large areas of the devolved nations.

Commercial fishing too, is vulnerable. Particularly where, off the west coast of Scotland and Wales, it is mostly for shellfish. Fresh produce, moved quickly on to EU markets is its mainstay.

Equally, though, even with a deal, the kind of agreement the UK government wants could be particularly challenging for Scotland and Wales. Irish exports to the rest of the EU use Britain as a “landbridge”.

Much of the business runs through Holyhead, off Anglesey. Can an agreement keep that traffic rolling on and off the ferries there?

Any new delays could cause traffic snarl-ups in the area – and perhaps along the A55, North Wales’ main arterial road. Delays might undermine the viability of the route. Plans for fast ferries from Dublin that bypass Britain, and take the business away from Holyhead, are being considered.

Some changes have already happened. Financial services are just under 10% of the Scottish economy – a bigger proportion than elsewhere in the UK.

Anticipating losing the “passporting” rights that allowed UK financial products to be sold throughout the European Economic Area, after the original exit day in March 2019, big Scottish companies made changes.

Not strictly part of the negotiations, the EU could give “equivalence” status to allow some financial services to be traded from the UK on the basis of domestic rules. But it is relatively easy for the EU to revoke that status.

Companies may relocate more activities to the EU in the future, including from Scotland, particularly if UK-EU relations remain strained.

But Brexit’s indirect impact on devolution may prove even more important. The implications of the UK government’s Internal Market Bill for Northern Ireland are controversial.

It also proposes deep changes to the institutional and regulatory structure of devolution for Scotland and Wales. It does not directly alter devolved authorities’ formal capacities to to make laws but the governments in Scotland and Wales fear that, in practice, its provisions will dramatically limit their powers.

For Boris Johnson’s government, Brexit seems to mean maximising its own scope for independent action. Not just from the EU, but also from devolved governments. The UK has never had adequate institutions for its governments to work together. Often, London’s preference has been, it seems, to “devolve and forget”.

Johnson has pressed ahead with Brexit and then with the future relationship negotiations without much consultation, never mind involvement of the devolved governments.

If its aim had been to undermine trust between governments, Johnson’s administration could hardly have done more. In the name of protecting the Union, the UK government proposes to give itself new powers in devolved policy areas, including funding for major infrastructure projects.

Reports of Johnson overriding Welsh government policy and directly funding the M4 relief road seem mischievous. Given devolved control of planning, it’s hard to see how they would work in practice.

Without a clear statement about devolved powers or a framework for joint work, the danger is that Johnson is simply replacing “devolve and forget” with “devolve and meddle”.

For Number 10, does “taking back control” mean from Cardiff and Edinburgh as well as from Brussels.

By Daniel Wincott, Director of Governance after Brexit and Blackwell Professor of Law and Society at Cardiff University. This article was first published by The Conversation.