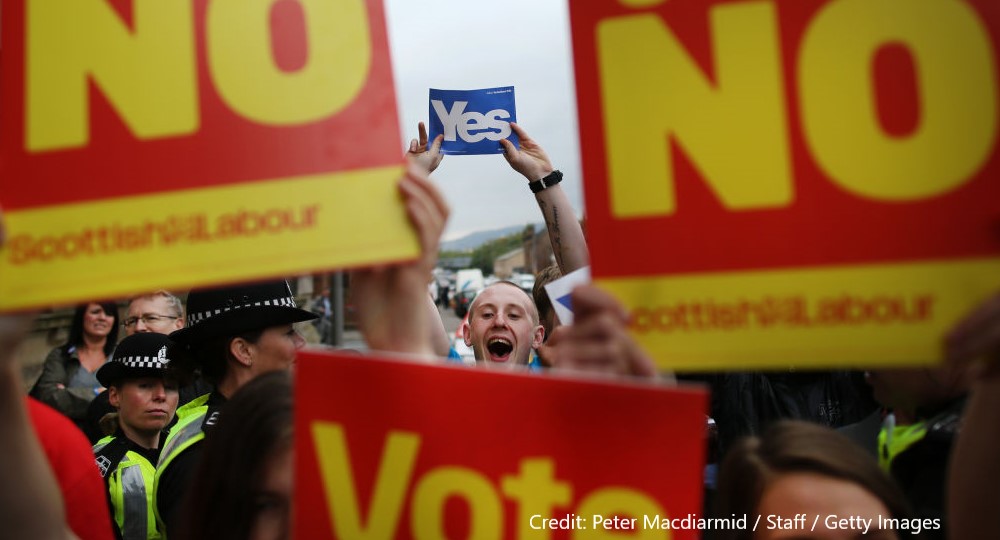 There is no doubt that Brexit has reenergised the campaign for independence in Scotland. The fact that Scotland had to leave the EU with the rest of the UK, despite 62% of Scots voting Remain in the Brexit referendum, created a grievance and a sense that Scotland’s voice was being ignored.

The Brexit process has contributed to these feelings too. The Scottish government, along with the other devolved administrations, struggled to have any influence over Brexit negotiations. In preparing for Brexit, the UK government passed a series of laws that threaten to undermine the Scottish Parliament’s law-making power. The United Kingdom Internal Market Act is the most notable of these.

Adding insult to injury, this Act was passed despite the Scottish Parliament (along with the Welsh Senedd) withholding its consent, against an established constitutional convention – known as the Sewel convention – which specifies that the UK Parliament will not normally pass laws in devolved areas without the consent of the devolved legislatures.

The Scottish government, led by the Scottish National Party, is committed to holding an independence referendum before the end of 2023. Rejoining the European Union will be central to its independence ambitions. But Brexit brings new challenges to the prospect of ‘independence in Europe’, and chief amongst these is the status of the border Scotland shares with England.

Following Scottish independence, this would become an international border between Scotland and the UK; and if Scotland rejoined the EU, it would also become a new border between the EU and the UK. As an EU member state, Scotland would have obligations to manage and protect this EU border.

In a new report for UK in a Changing Europe, Professor Katy Hayward and I explore in detail how Scotland might manage a border with the United Kingdom, should it gain independence and join the EU. We consider some of the checks and processes that would need to be put in place, especially to oversee the cross-border trade in goods.

Currently, UK-EU trade relations are governed by the Trade and Co-operation Agreement reached at the end of 2020. Assuming this is still in place if and when Scotland becomes independent, it would ensure there were no tariffs on goods crossing the new UK-Scottish border. However, customs procedures and other bureaucratic checks would be required, especially on heavily regulated products like agri-foods and medicine.

This may not lead to the kind of lorry queues we have seen in Dover or Calais – after all, road transport has fewer capacity issues than ferries. But the cumulative effect of these checks could be disruptive nonetheless, adding costs to businesses exporting across the border in both directions.

Some of the costs faced by Scottish businesses might be offset once access to European markets is strengthened by the removal of the trade barriers that have come with Brexit. But most Scottish exports bound for Europe use England as a ‘land-bridge’.

Loads destined from/to Scotland from/to the EU could be sealed as they cross the ‘land-bridge’, though this would require a change to current practice. This would avoid having to go through the type of paperwork, checks and controls required for goods traded between the EU and England/Wales, though hauliers may still be affected by delays at ports.

Scotland also trades more with the rest of the UK than it does with the EU, although the majority of that trade is in services. As it stands, the Brexit deal says very little about services, and that might make it possible for Scotland and the rest of the UK to come to separate arrangements to support services trade.

It is not only trade that crosses borders. People cross them too, whether to visit family and friends, enjoy holidays, go shopping or sometimes go to work. Freedom of movement has been curtailed between the UK and the EU as a result of Brexit. But we expect that an independent Scotland, like Ireland, would remain within the Common Travel Area.

This allows free movement for British and Irish citizens across these islands, including the freedom to work, study, access services and sometimes vote. So, while we expect some tightening of rules – when taking pets across the border, for example – we do not anticipate the need for passport checks.

There is nothing especially radical about an independent country assuming responsibility for managing its own borders. And, as land borders go, the length and terrain of the Scottish-English border mean that it is comparatively straightforward to manage.

But when it comes to Scotland and independence, setting up border management agencies and infrastructure as part of the unwinding of a 300-year-old political and economic union would be a significant undertaking. Goodwill on both sides would be vital but, as with many a divorce, this could be in short supply.

By Nicola McEwen, Senior Fellow at UK in a Changing Europe and Professor of Territorial Politics at the University of Edinburgh.