Scotland’s Brexit choices: will they be centre stage in the election? 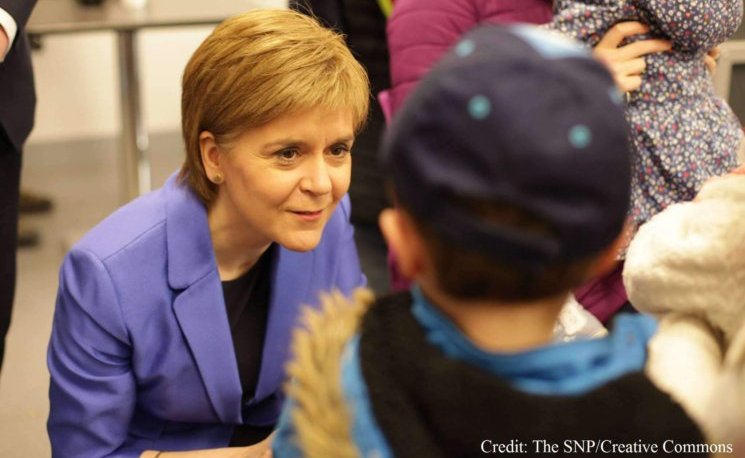 It’s early days in the general election campaign in Scotland. But so far, Brexit appears to be the elephant in the room. With Nicola Sturgeon having called for a second independence referendum in March, and with Theresa May refusing to allow one while Brexit talks are under way, logic (if not politics) might imply both Brexit and independence would be centre stage.

Yet none of the main parties seem very keen to talk about Brexit or the EU – and how much the Scottish National Party (SNP) will focus on independence is also not yet clear.

But whatever spin the politicians go for, there are big choices facing Scotland. Are the Scottish public ready to stay part of the UK as it heads for the EU exit door, despite having voted 62% to 38% to remain last June? Or would they, given the choice, prefer independence in the EU? Compared to 2014, the choice has become a more tricky one – and in many ways it is now a choice between two unions.

Will the parties debate the EU in the election?

The Tories are making it clear they want the general election – and the local elections on 4th May – to be about independence but not Brexit. This is unsurprising if tricky for them. With a strong poll lead over Labour, they are well placed to pick up unionist voters unhappy at Sturgeon’s push for a new referendum. But most Scottish voters still support staying in the EU, so the Tories are surely vulnerable faced with arguments about the damaging impact of Brexit.

Yet, so far, First Minister Nicola Sturgeon and the SNP are focusing more on the Tories’ domestic policies as the main threat to Scotland rather than on independence or Brexit. Having won 56 out of 59 seats in their landslide in 2015, the SNP are likely to lose some this time around. The big question will be how many – with the Tories currently well ahead of Labour in the polls, the Tories could be set to pick up a handful of seats, and Labour and the Liberal Democrats perhaps a couple.

But the SNP are still on track to hold most of their seats. And while going down to 45 or 50 MPs might represent a falling back, it would leave the SNP holding over three-quarters or more of Scottish seats. Sturgeon will also continue to insist that the Scottish parliament vote in March for a second independence referendum (voted through by SNP and Green MSPs), and the number of SNP MPs, still give her a clear mandate for a second referendum.

Equally, the Tories, Labour and the Liberal Democrats will use any loss of more than a couple of SNP MPs to argue back that Sturgeon should stop talking about a referendum. Polls suggest Scottish voters do not support a second referendum yet – though they are more split on one in two years time when the results of Brexit talks are clearer. Sturgeon has said she wants a referendum in autumn 2018 or spring 2019, after the exit deal is clear.

On independence itself, Scotland is split down the middle – most polls suggesting the unionist side are just ahead of the independence side around 51% to 49% (though a recent poll put the ‘yes’ side down to 40%).

Scottish Labour, meanwhile, is anti-independence but no longer anti-Brexit, though trying, as in the rest of the UK, to distinguish themselves from the Tories on Brexit. In contrast to UK Labour’s election stance on Brexit – getting as close to the single market as possible without being in it, Scottish Labour have supported Nicola Sturgeon’s December proposal for Scotland to remain in the EU’s single market and the UK. But Theresa May has rejected this proposal, though David Davis’ letter setting out why has yet to be made public.

The Liberal Democrats are, of course, arguing for a soft Brexit – staying in the EU’s single market (though they opposed Sturgeon’s compromise solution). But they are not currently calling for a second EU referendum to oppose Brexit now – only for one on the EU exit deal.

Independence in the EU or EEA or staying with the UK?

The positions of the other parties on Brexit ought to leave the ground open for Nicola Sturgeon to make a strong pro-independence and pro-EU case. Hers could be the strongest pro-EU voice in the elections (along with the Greens). The huge task that Brexit represents, and the growing indications of economic damage – from the falling pound to rising inflation and falling retail sales – give her plenty of material.

Perhaps the SNP will grasp this opportunity and make it a Brexit and independence election after all, not just an anti-Tory one. But there has recently been a reluctance to talk up the prospect of gaining independence while remaining a member of the EU.

About a third of SNP supporters, according to polls, voted ‘leave’ in last year’s referendum. While the SNP’s official policy line is still to end up in the EU, there has been some talk recently of starting out in the European Economic Area, or at least transitioning through it. If the UK crashed out of the EU on World Trade Organisation (WTO) terms, such a shift could also ease border tariff concerns.

But the pro-independence side would also need to win over ‘no’ voters last time who voted ‘remain’ in the EU vote. Fudging the choice via the EEA may not appeal to those voters.

In the end, Scotland will have to choose: staying part of the UK and whatever future trade deal it agrees (or fails to agree) with the rest of the EU, or being independent in the EU or the EEA. Leaving the EU with the rest of the UK, and only choosing some years after Brexit risks imposing double costs – first unwinding all EU rules, then reintroducing them.

The general election provides an opportunity to have these arguments out. But with Scottish Tories avoiding talking about Brexit, and Sturgeon not yet talking up Scotland’s EU options, it’s unclear if Brexit and independence will be centre stage together or not.

By Dr. Kirsty Hughes, Director of the Scottish Centre on European Relations. Recent paper on Scotland’s Brexit choices can be found here.