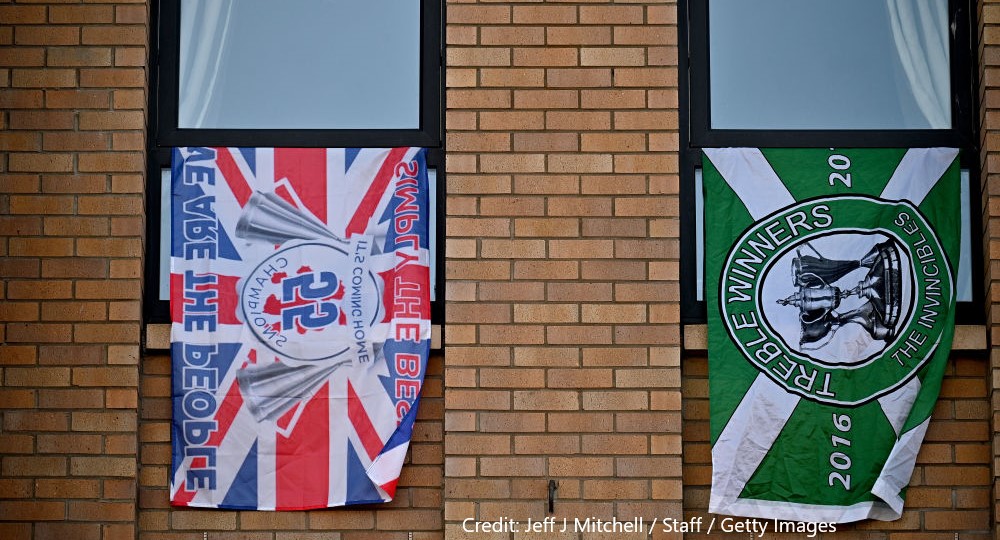 Electoral politics are strongly influenced by unfolding events, some of them leading to major shifts in alignment. In Scotland, however, the clearest example of realignment is to be found not so much in terms of the Scottish electorate and support for specific political parties, but rather in a shift of sections of the population from UK unionism towards support for Scottish independence, despite the victory of the ‘No’ campaign in the 2014 Scottish independence referendum.

Furthermore, in post-Indyref Scotland, the unfolding political, economic, and constitutional implications of the UK’s withdrawal from the EU have raised further questions concerning Scotland’s constitutional future. Perhaps unsurprisingly, the pro-independence and anti-Brexit Scottish National Party (SNP) have used Brexit as a further cause in their push for a second referendum on Scottish independence, with Nicola Sturgeon, SNP leader and Scottish First Minister, intending to hold a second referendum before the end of 2023.

It is within this broader political context that we have recently examined how the shifting dynamics of contemporary Scottish politics have been reflected in the shifting political and social affiliations of fans of Scottish football clubs, with a particular focus on the ‘Old Firm’ of Celtic and Rangers, the two largest clubs in Scotland.

In particular, we were interested in exploring the degree to which football fandom and identity was deemed to play a part in influencing the political attitudes and voting behaviours of Scottish football fans.

For example, during the 2014 Scottish independence referendum, personalities from the world of football were often pursued for endorsements of a ‘Yes’ or a ‘No’ vote by campaigners from both sides of the political debate, including the official pro-independence ‘Yes Scotland’ and pro-union ‘Better Together’ campaigns. It was apparent, therefore, that footballers and football issues were perceived by campaign strategists to possess a degree of potential political influence on the general public.

Furthermore, the ethnoreligious divides of Scottish society have undoubtedly framed much of the discussion on the politics of Scottish football and, in particular, the controversies around the expression of sectarian political identities associated with Protestant and Catholic fans of the Old Firm clubs. Indeed, as argued in the 2014 Scottish Social Attitudes report on ‘sectarianism’:

While just over half of each of these clubs’ support comes from people of the religion they have been historically associated with, they also gain support from people of other religions or none. However, relatively few Catholics support Rangers or Protestants Celtic… Football is the most commonly mentioned factor people believe contributes to sectarianism in Scotland (88% mentioned it, and 55% thought it was the main factor).

Historically, Rangers, and their supporters, have frequently been associated with overt expressions of Protestantism, Orangeism, Conservativism, and unionism (in relation to both Scotland and Northern Ireland).

In contrast, Celtic supporters have been associated with Irishness, Catholicism and republicanism, and the left of the political spectrum through a relatively strong affinity with the Labour Party.

Our interviewees suggested that the shifting dynamics of contemporary Scottish politics were reflected in the shifting political and social affiliations of Scottish football clubs. Although the traditional political allegiances of Celtic and Rangers were argued to persist to a degree, the strength of these allegiances was undermined by the robust and healthy political debate about Scotland’s political future during the 2014 independence referendum.

Indeed, the shifting sands in the political allegiances of Scottish football clubs was illustrated in opinion polling conducted by the Wings Over Scotland website in May 2014, which examined voting intentions in the 2014 referendum on a club-by-club basis. The intentions of Rangers and Celtic fans countered the past assumptions about each club’s constitutional allegiance. Indeed, the fact that the two Glasgow clubs represented the only ‘Yes’ supporting clubs challenged these traditional political stereotypes:

However, in the 2014 referendum itself, Glasgow and Dundee were the only Scottish cities in which there was a majority for ‘Yes’ (53.49% and 57.35% respectively) in the independence referendum. Our research therefore suggests that the location of these clubs may be more of an explanation: 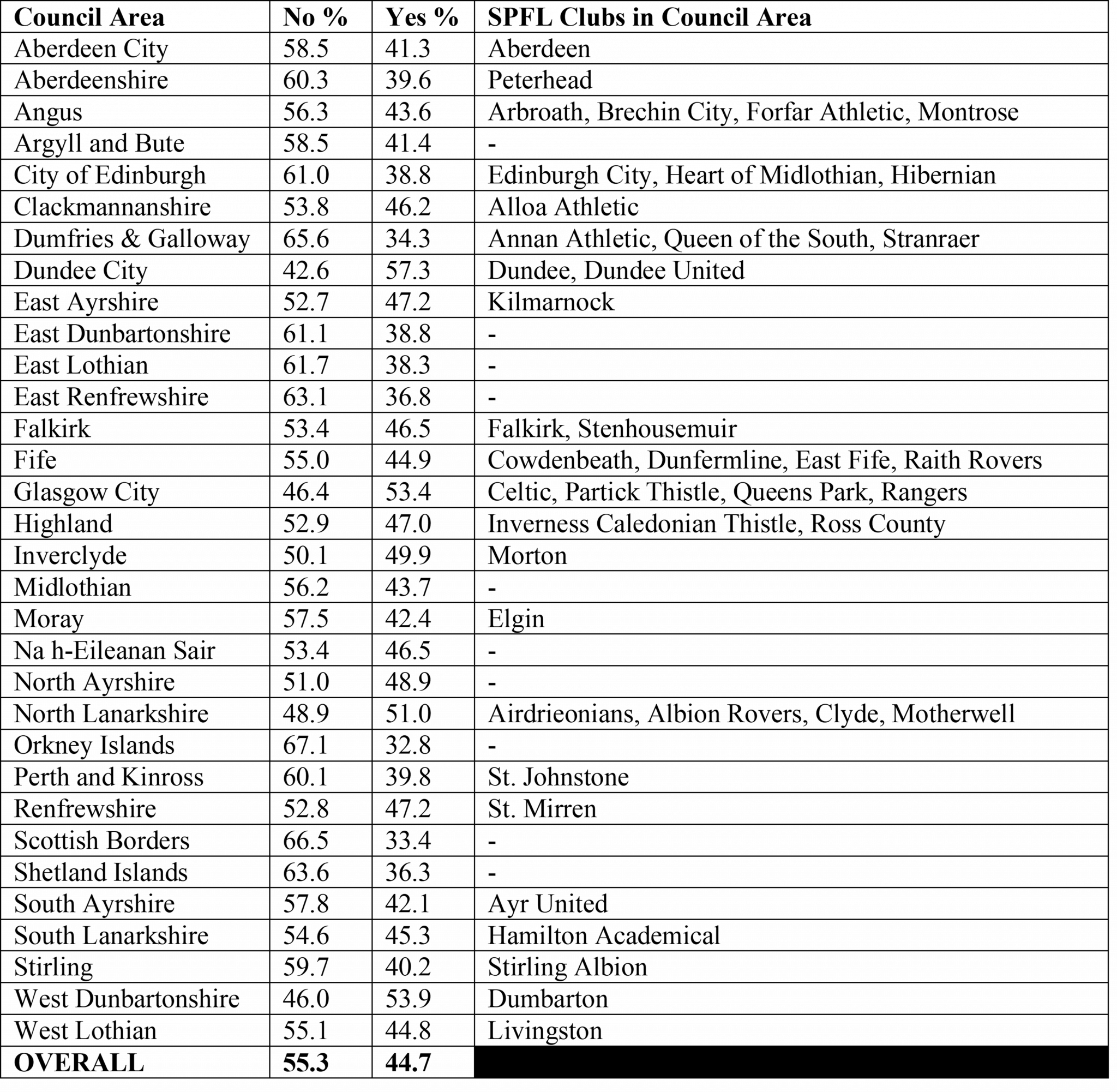 In many ways, this destabilisation of the political allegiances of the Old Firm should come as no surprise given the high degree of political engagement of the electorate during the Scottish independence referendum debate.

This engagement arguably neutered the impact of political identities linked to football support, given the importance of the constitutional questions faced by Scottish voters in recent years. It is therefore important to avoid exaggerating the influence of football fandom on voting behaviours.

Nevertheless, our findings suggested that social identities associated with football clubs continue to possess at least some degree of influence on shaping the political views of some Scottish football supporters.

Given that a number of interviewees from the contrasting clubs stated that they were aware of individuals who had voted ‘Yes’ or ‘No’ in the Scottish independence referendum based solely on their allegiance to a football club, this suggests that, for a small minority of the Scottish electorate, football is more than simply a game.

It therefore remains to be seen the extent to which the ongoing debates on Scotland’s constitutional future will be influenced or linked to the domain of football. Brexit has been argued by pro-independence campaigners to be yet another example of Scotland’s democratic deficit within the UK, with the significant pro-EU sentiment of the Scottish electorate – with a 62% Remain vote – ignored by the UK-wide aggregation in the Brexit referendum result.

Although football-based allegiance is but one such minor factor within this complex political debate, the potential opportunity to tap into this populist domain by politicians is unlikely to go unnoticed in future campaigns.

By Stuart Whigham, Senior Lecturer in Sport, Coaching and Physical Education at Oxford Brookes University, John Kelly, Lecturer in Sport Management at the University of Edinburgh, and Alan Bairner, Professor of Sport and Social Theory at the Loughborough University. This blog is based on research published in British Politics.